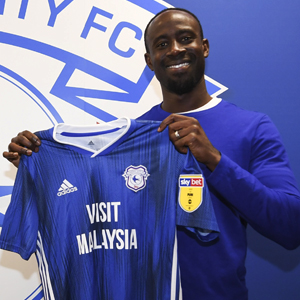 The Bluebirds secured the loan signing of Albert Adomah from Nottingham Forest on ‘Deadline Day’, January 2020.

A pacey winger with plenty of Championship experience, Albert began his career with Barnet before moving to Bristol City. After three seasons and over 100 second tier appearances at Ashton Gate, he moved to Middlesbrough in 2013.

It was at the Riverside where Adomah starred, scoring 12 goals in his first season. Having narrowly lost the Play-Off Final in 2015, Boro reached the top flight in 2016, with Adomah making 43 appearances in the promotion campaign.

The Ghanaian international signed for Aston Villa in 2016, and was the club’s top scorer as they reached the Play-Off Final. However, Adomah earned his second promotion to the Premier League the following season, netting four goals in the 2018-19 campaign.