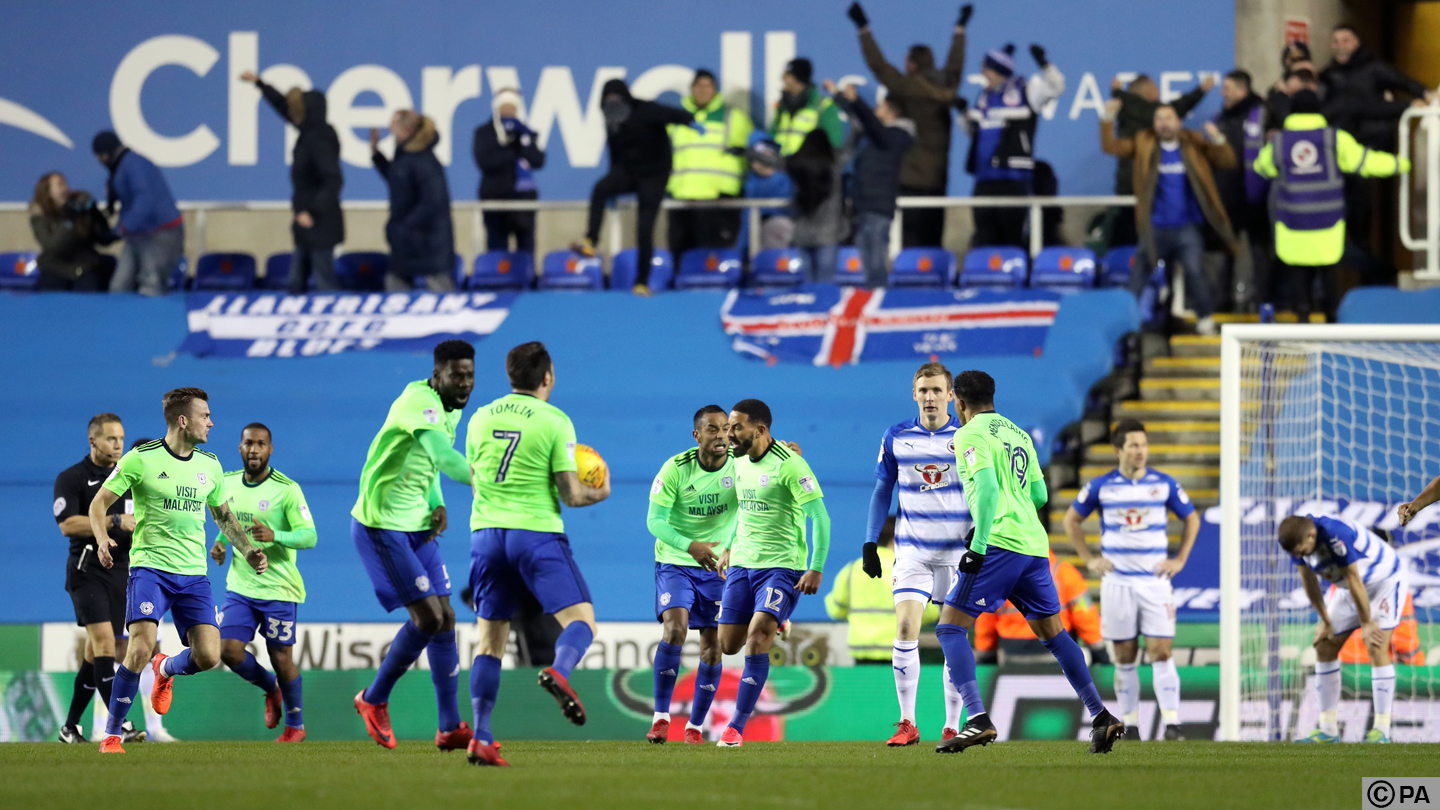 Match report for Reading vs Cardiff City on 11 Dec 17

Lee Tomlin’s injury-time strike completed a dramatic comeback as Cardiff City came from two goals down to secure a crucial point away at Reading.

City, lining up in their lime green away shirt, had a chance to take the lead before the 15-minute mark, as Loïc Damour’s reverse pass found Nathaniel Mendez-Laing on the left. The winger showed a trademark turn of pace, breezing past his marker before seeing his powerful strike saved.

However, the Bluebirds’ chances were dealt a blow just two minutes later. Callum Paterson rose at the near post to get his head to a corner, and a defensive mix-up saw the ball find the far side of the net.

The hosts were attempting to play the ball out from the back, and were nearly caught out when Omar Bogle stole in and found Junior Hoilett, who was brought down. The resulting free-kick eventually led to a good opportunity as Hoilett himself headed just over.

City skipper Sean Morrison was forced off with just over half an hour played, as Lee Peltier came on to deputise. Neil Warnock’s men almost equalised minutes later, as Joe Ralls’ long distance half-volley was parried by Vitor Mannone, before Mendez-Laing’s follow-up was also saved.

The Royals then doubled their advantage five minutes before the interval. After the ball was cleared from the City box, Modou Barrow smashed it goalwards and a cruel deflection took it past Neil Etheridge.

Warnock’s men showed intent to fight back after the break, with Mendez-Laing and Ralls combining for an early opportunity, which Mannone dealt with.

The Bluebirds were twice unfortunate not to pull one back after catching the hosts out at the back. First, Hoilett’s header bounced inches over the bar when it looked destined for the back of the net, before Bogle nearly capitalised on a poor back-pass.

Peltier had to be on hand to clear a low Reading cross which flashed across the six-yard box, but at the other end, City were creating more opportunities.

Sol Bamba saw his close-range header spilled by Mannone, with the ball eventually cleared off the line, before Joe Bennett fired over from the edge of the box. Neil Warnock was then sent to the stands by referee Steve Martin, following complaints over several officiating decisions.

However, the Bluebirds finally found a route back into the game when Bennett fired a superb volley into the back of Mannone’s net, with seven minutes remaining.

And the game then reached its dramatic climax as City completed the fightback with a last-ditch equaliser. After Bamba’s header hit the woodwork, substitute Lee Tomlin rifled a volley against the underside of the bar.

With the help of goal-line technology, the goal was awarded to give the Bluebirds a crucial leveller in the final minutes of the game.