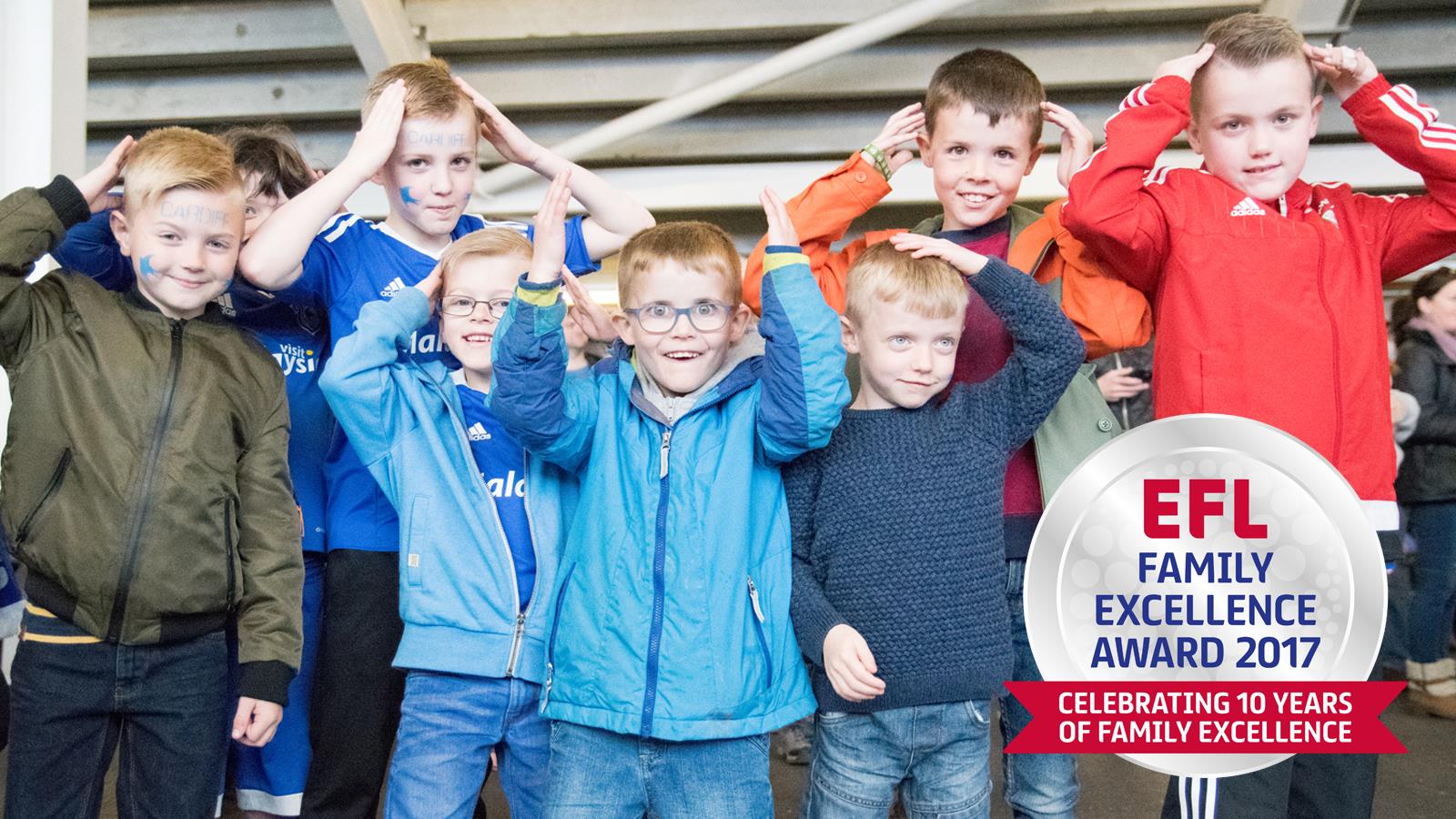 We are delighted to confirm that Cardiff City has been included in the EFL's list of Family Excellence Award winners for the 2016/17 season.

Over the past decade, Cardiff City has secured the award in every year they have been eligible to receive it - an achievement shared by just seven other EFL clubs.

Created in 2007, the Award is celebrating its tenth anniversary this season and recognises the outstanding experience provided by clubs for young fans and families as well as their efforts to enhance the match-day experience.

In achieving the Award, the Bluebirds have been recognised as offering superb entertainment for families at Cardiff City Stadium throughout the 2016/17 season.

The EFL recognised City's engagement with young fans and families through our Family Stand activities, Bartley the Bluebird mascot, range of products in the stadium Superstore, concourse TVs and projectors and family content online and within the match-day programme.

Their report stated: "As has now been the case for many consecutive seasons, Cardiff City continues to lead on family engagement, with almost every touch point managed well both in terms of ease and making the family feel valued."

The Award sees the Bluebirds recognised for their fan engagement for the fourth time in 2017, following successive match-day experience honours.

Such evidence is a strong indication of a healthy future for football in this country according to Shaun Harvey, EFL Chief Executive.

He said: “The EFL Family Excellence Awards have proven to be a fantastic vehicle for celebrating and highlighting the excellent progress that clubs are making in providing families with improved match day experiences.

“Now in their 10th year, the Awards have made a significant impact and this year’s winners have once again shown how innovative thinking and a strong commitment can enhance the experience for both home and away.

“I wish to congratulate each and every club who has been recognised for playing their part in continuing to attract a growing number of younger fans to the game in what is undoubtedly a valuable indication of a bright and healthy future for the EFL.”

The Award recipients are decided by an independent assessment using real families that has been commissioned by the EFL, across all 72 League clubs, during the 2016/17 season.

More than ever this year, EFL clubs are providing families with engaging and innovative match-day entertainment, as they continue to find new and unique ways to attract fans and their families to matches.

A record breaking number of fifty-one clubs from across all three divisions in the EFL have achieved the award for 2017, with a significant increase in the benchmark standard being applied by the judging panel. Over the past ten years, more and more young people have made their way through the turnstiles in the EFL, with junior season ticket sales having increased by a staggering 37% since 2007, and 20% of all EFL club match attendees now under the age of 16.