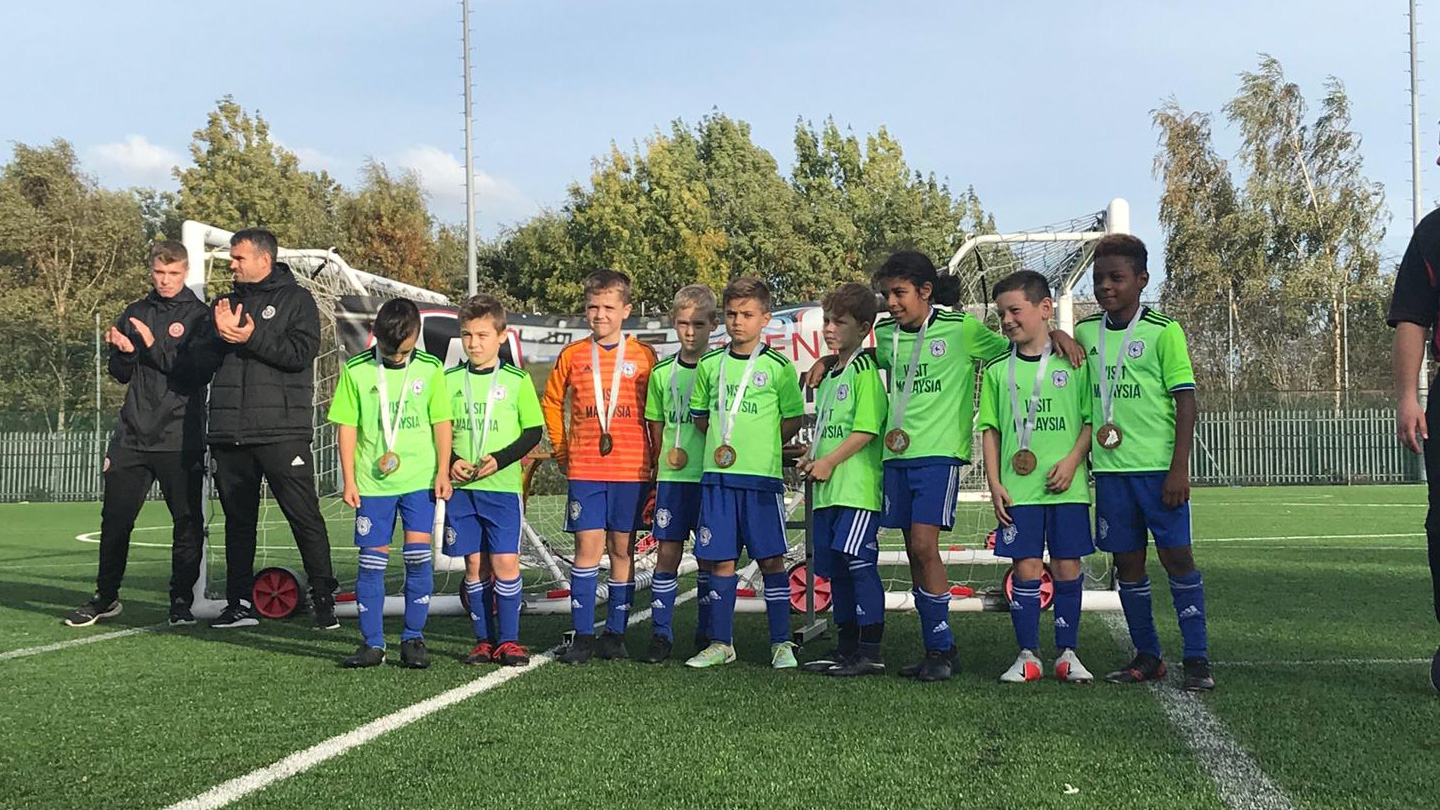 The Sokolik Cup is a tournament for players born 2009 onwards (U9s and U10s), taking place in Poland next June. The young Bluebirds travelled to Sheffield last weekend to take part in the qualifying rounds and produced an outstanding performance, finishing second overall and securing a place in Poland next summer.

“The prize is free participation in next June’s Sokolik Cup in Poland,” began Lawrence. “The opposition were strong, but the challenge for us is that the UK is based on a September to August age-band yet when we compete in Europe we are competing on year of birth.

“If we were against Feyenoord, our U10s would be playing against their U11s. Saturday was the 2009 tournament, which although is classed as U10s, it was a mix of U10s and U9s for us.”

Cardiff City comfortably qualified from the preliminary group stage in the morning, and were drawn against Manchester City, Everton and West Ham in the Champions League group.

“The afternoon’s first fixture was Man City, and we beat them 2-1 after going a goal down. The most exciting fixture of the day was West Ham, we beat them 4-3. It was a tough test as we went behind multiple times but managed to battle through and win the game.

“The final game was against eventual winners Everton, who beat us 5-2. Despite that, we did what we set out to do which was qualify for the tournament in Poland. For us, it was a very successful day.

“For some of those boys it was their first time away from their parents, so it’s quite a challenge. In terms of how they dealt with it, they brought a huge level of maturity which sounds unusual, but their capacity to behave responsibly was excellent and commendable.”

Assistant Foundation Phase Coach Nathan McConville added: “The group has been away to Brussels and Munich together previously so having the group away from home together beforehand obviously helped. I think we were well prepared for it and it showed.

“Because our games programme is so competitive, that when we go to events like this, there are many teams who don’t match us in that department and our players are now really starting to learn and compete in games.”

“Our U7s and U8s went to Southampton and won a tournament on the weekend, with the U9s winning their tournament in Bristol. There is a lot of progression happening in all age groups, which is showcased by our recent success.

“Despite this, we still managed to take players out of their groups for the Sokolik Cup and finished second to qualify for the tournament. Competitively, I would say we are in quite a good position. We are constantly looking to progress and how we can develop in a better way.

“When we go to tournaments, we have a relatively good idea of where we feature amongst the teams in the UK. We went out to Brussels last year and finished third, we went to Dusseldorf and missed out on the final eight by one game. We think we are a top end team, not necessarily the best, but we are on the right path.”