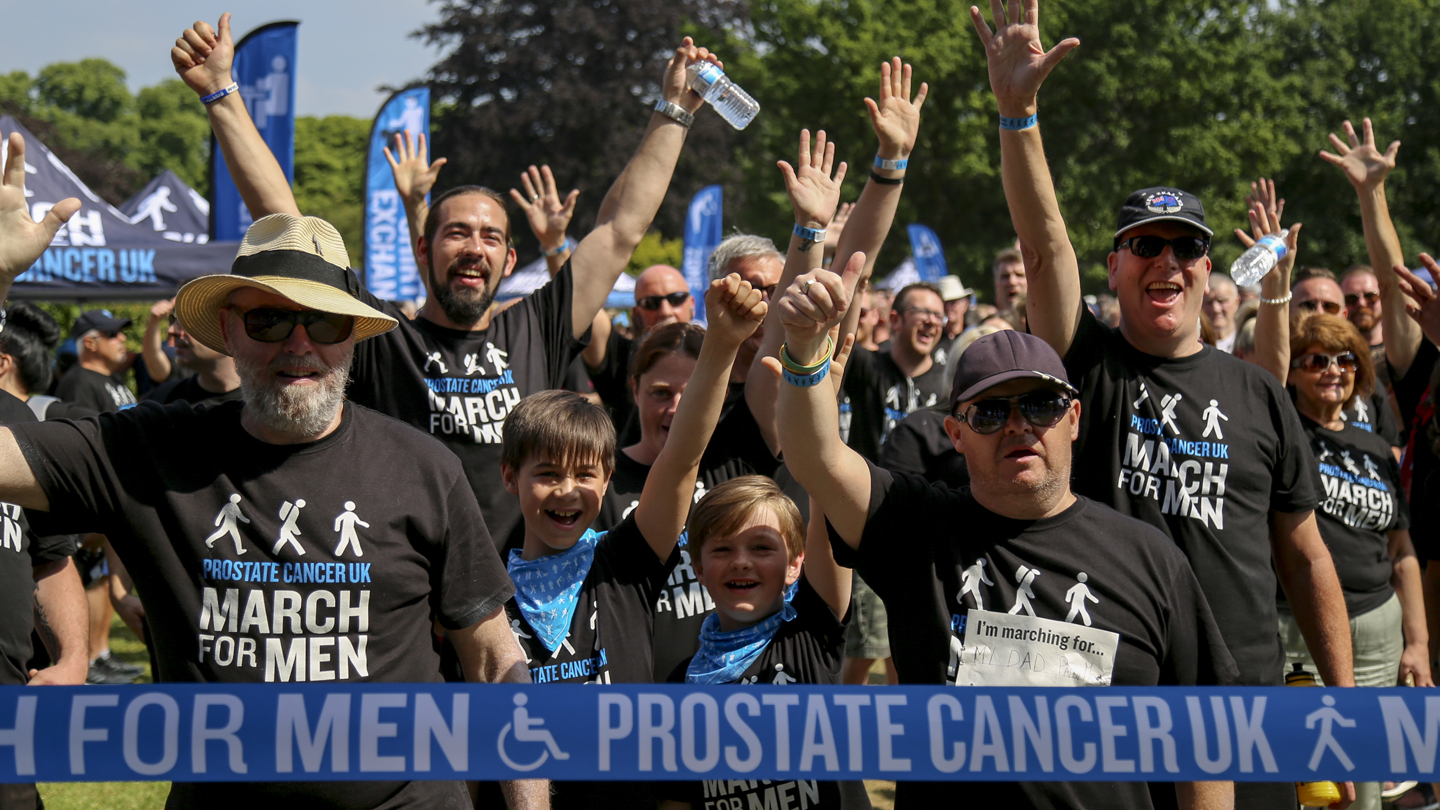 Prostate Cancer UK | ‘Men, we are with you’ | Sign up to a Cardiff March for Men

Join Prostate Cancer UK in saying: ‘Men, we are with you’ and sign up to a Cardiff March for Men

This is the message from leading men’s health charity, Prostate Cancer UK, as their March for Men series kicks off a new event in Cardiff this summer.

Prostate Cancer UK this week launches its new campaign to celebrate everything great about men and highlight the moments lost when a man dies every 45 minutes from prostate cancer.

For the first time, the Cardiff March for Men will take place at Bute Park on Father’s Day (16th June). It’s a family-friendly event where amblers of a range of fitness levels can walk in solidarity to celebrate and pay tribute to the special men in their lives.

Stepping up to the challenge, the charity will be urging walkers to back their campaign by completing a 2km, 5km or 10km route around the park – raising funds needed for vital research into the diagnosis and treatment of prostate cancer, with the aim of saving men’s lives.

Prostate Cancer UK Chief Executive Angela Culhane said: “We stand with men and for men: when diagnosis isn’t good enough, to fund research breakthroughs to provide better treatments, to campaign for better care, and with direct help through our support services. The fight against prostate cancer, a disease that kills one man every 45 minutes, is a purpose worth uniting for, and we want to continue making strides to combat this disease. That’s why our March for Men walking programme is bigger and better than ever this year with 10 city marches in June.

“We are constantly inspired by the incredible men, women and children who come out to support us, each with their own story, personal motivation and challenges to conquer. We will be proud to walk side by side with them and together we can add to the real momentum building in the fight against this disease. The vital next step is to fund more ground-breaking research and work towards a screening programme, to catch prostate cancer early and save lives.”

Since 2016, more than 10,000 people have walked with Prostate Cancer UK and raised over £3.3million to support the charity’s vital work – but with the disease killing more people than breast cancer that quest is more urgent than ever and is driving a busy summer of activity.

Almost 21,000 men are living with and after prostate cancer in Wales, and that figure is more than 2,800 in Cardiff emphasising the need to raise awareness and funds.

Cardiff City boss Neil Warnock (pictured below sporting the Man of Men pin badge) has regularly supported Prostate Cancer UK. He added: “The fact that one man will die every 45 minutes from prostate cancer is something we can’t hide from."

Sky Sports presenter Jeff Stelling will also reprise his own March for Men, walking four marathons in four countries in four days from 5-8 September, kicking off in Glasgow, before visiting Belfast and then heading to Cardiff on Saturday 7th September ahead of the finale in London.

Stelling will be pounding the pavements across the major metropoles in a bid to raise over £1m, following the 25 walking marathons he has already completed in support of Prostate Cancer UK. He is inviting the Welsh public to pull on their walking boots to join him and support the charity in their quest to help stop prostate cancer being a killer.

“Prostate cancer is the most common cancer in men, with one man dying every 45 minutes from this disease. That’s unacceptable, and that’s why I’m walking again”, said Jeff, who regularly wears the Prostate Cancer UK Man of Men pin badge on Soccer Saturday.

“It’s an indiscriminate disease, affecting men and their loved ones across the UK. I’ve walked alongside many of them and am proud to call some friends. Their reaction and positive outlook despite being dealt the toughest of hands is simply unbelievable. I’m marching for them – and everyone affected – in a bid to fund the research to change the game.

“That’s why I’m taking our walk across into Wales and all four home nations and would love the public to join me. I live in England and work in London but the wonderful work of Prostate Cancer UK stretches into Scotland, Northern Ireland and Wales, so I will be pounding the pavements in four historic cities – and it wouldn’t be a football march without popping in on some iconic football clubs along the way.”

To walk alongside Prostate Cancer UK, sign up for the Cardiff March for Men, join Jeff or organise your own March. For more information visit marchformen.org.