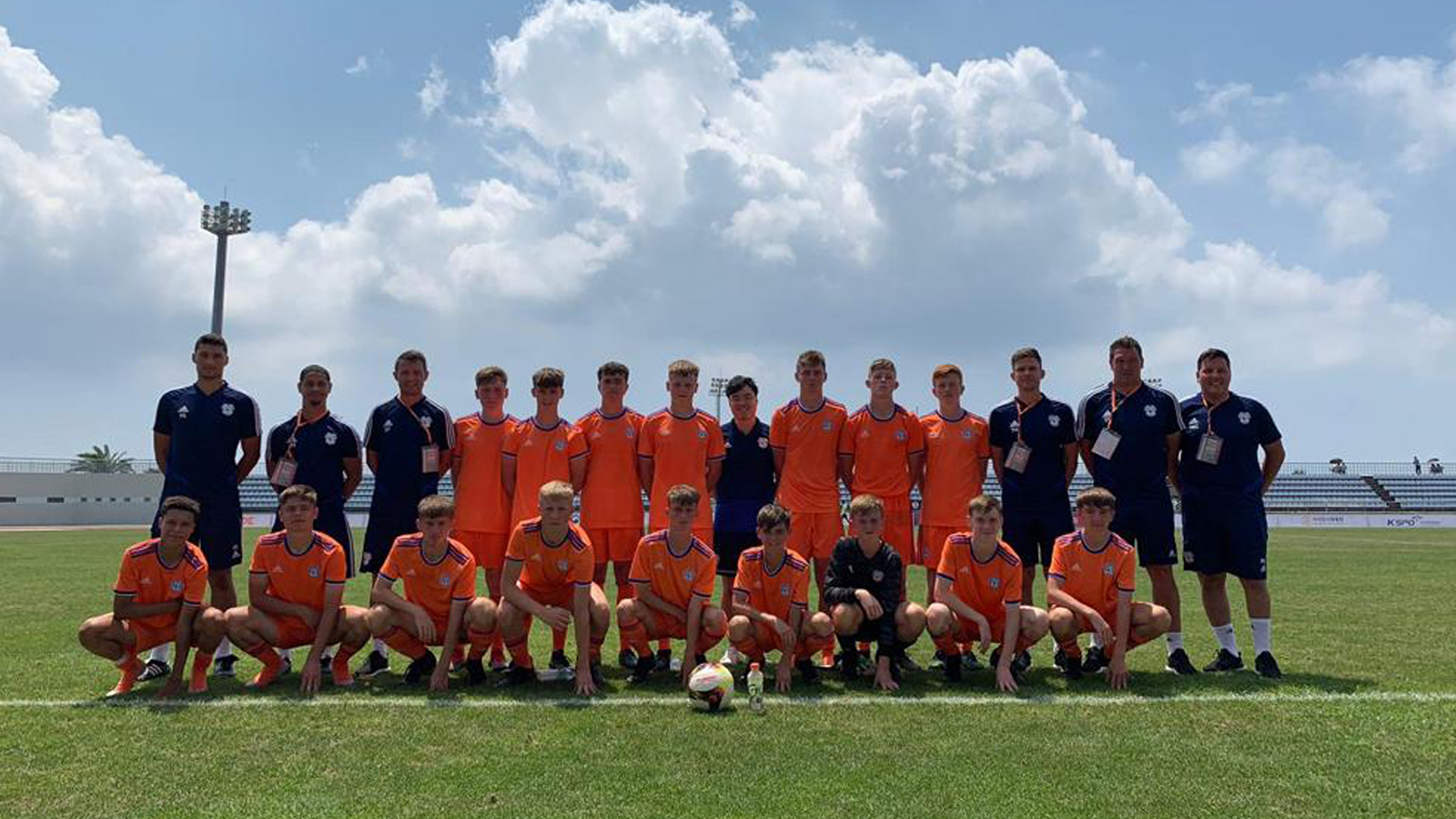 In August, Cardiff City FC's Academy participated in the 2019 JEJU International Cup in South Korea. Following a terrific display by the young Bluebirds' 2004 side, City came away from their group in second place in what was the first international tournament for many of the squad members.

In this feature, we sit down with the team's head coach, Dane Facey, to discuss the trip and the positive effects that it had on the team both on and off the pitch... 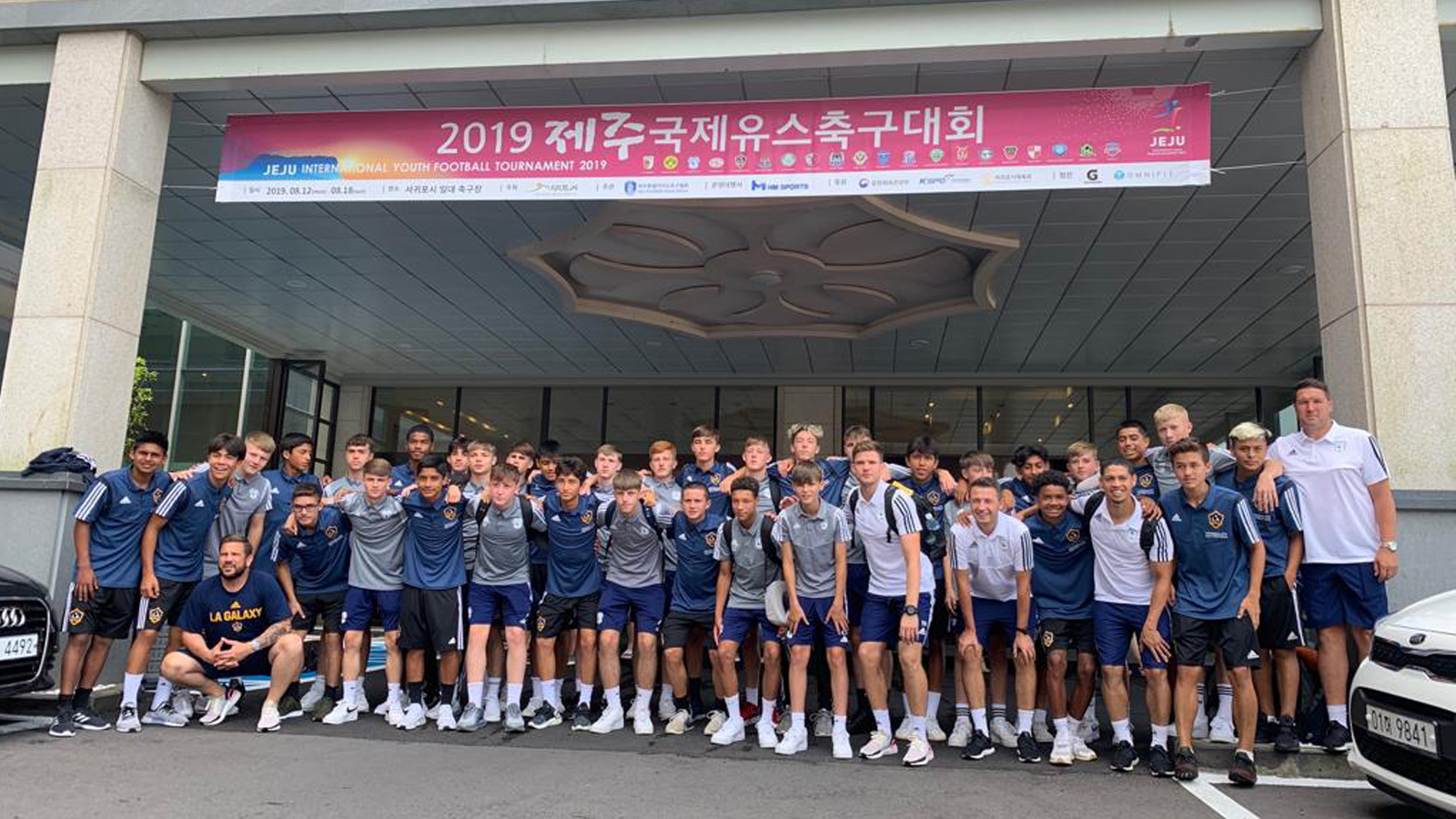 “It was a fantastic experience for our players." began Dane. "I think that from the Academy’s perspective this is the first time that we had ever gone internationally for a tour.

“To get that experience and to have the opportunity to play on more of a world stage was fantastic, as this tournament included teams from the Americas, to Japan and across Asia, to big teams that compete across Europe such as Borussia Dortmund and PSV Eindhoven.

“This was a tournament on a far larger scale than what we had ever done before.

“Some of the really positive experiences for the players were that of the 16 players we took, 13 hadn’t had the experience of travelling so far.

“Travelling that far was an experience that young players wouldn’t normally get unless they were a part of a First Team environment.

“Of course, taking young players out to Jeju also gave them exposure to another culture, which was a great educational feature that the tournament provided."

The youth tournament, which was held between the 13th-18th of August, was held on Jeju Island, in South Korea. Located in the Jeju Province, the island lies in the Korea Strait, off the south coast of the country. Many of the matches were played in Gongcheonpo, a seaside town near the city of Seogwipo. 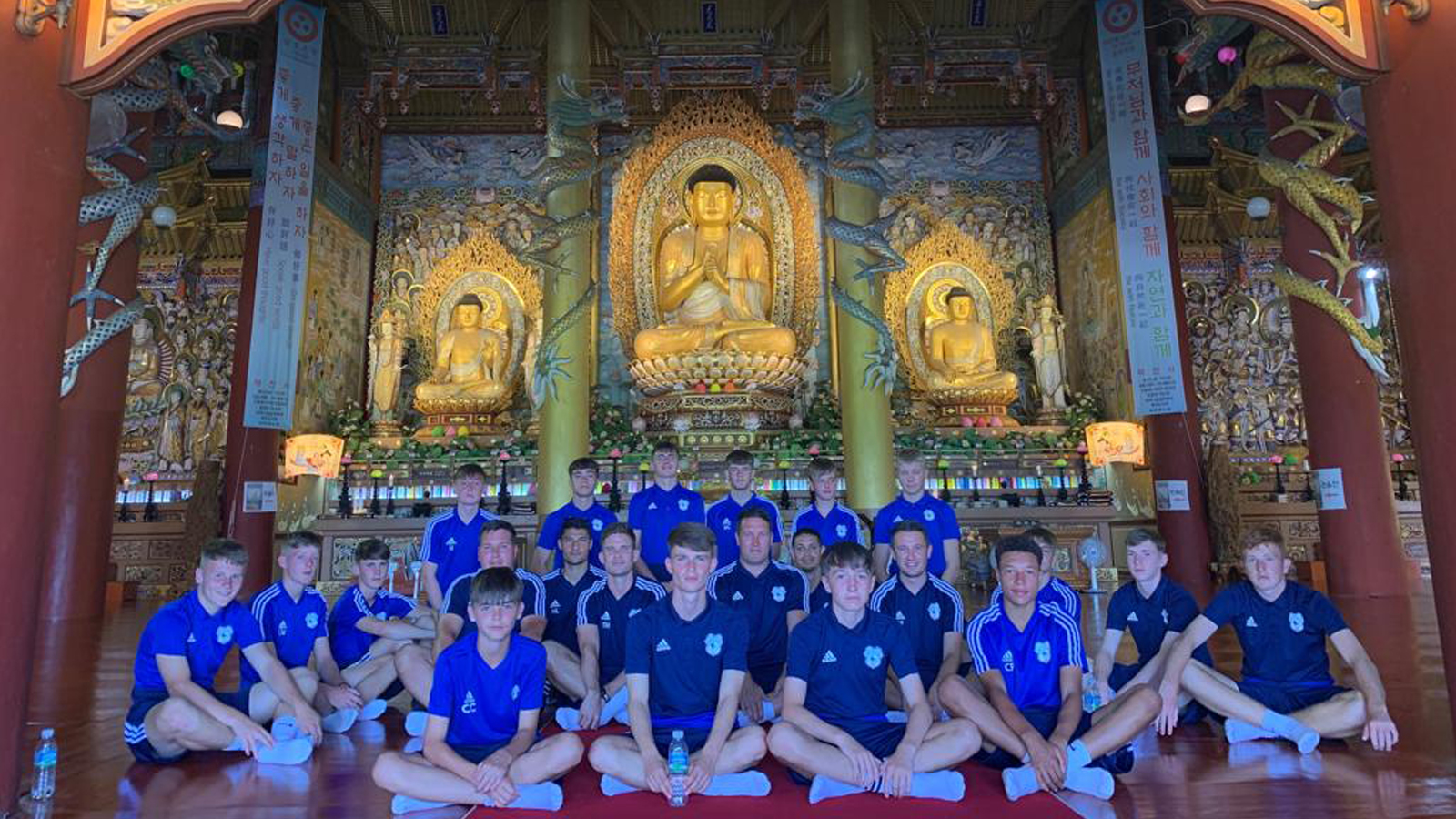 The young Bluebirds’ experiences of other cultures included their visit to Yakcheonsa Buddhist temple, as well as other local areas that enrichened their understanding of the region.

During the time on Jeju, they also visited a site of the island’s football history, the Jeju World Cup Stadium. Currently the home of football club Jeju United, the stadium was built to be used in the 2002 FIFA World Cup, where it held three matches, including a group match for eventual tournament winners Brazil.

As a young side far away from home, the effect that the trip had on the development of the players’ relationship with each other both on and off the pitch was also very important as they adapted to playing in an unfamiliar part of the world:

“I think that it’s really helped to gel the group going forward. From a pre-season aspect it was a great opportunity for us to work with the players.

“The independence that this experience gave the boys is massive. Going into the trip that was something that we strongly emphasised.

“Even from making them set their own alarms to wake up in the morning and setting times on meals we were giving them the opportunity to take charge of their own time, which was something that really helped our young players to develop by themselves.

“Recovery was also a massive part of it. As it was a busy tournament where you were playing one evening and then again in the morning afterwards, that intensity demanded good recovery between fixtures.

“That short window of time became really important as the boys have properly learned how to recover and make themselves ready for matches within hours of each other."

City’s Academy coaching team were very impressed with the organisation of the tournament itself, which was sanctioned by both FIFA and the AFC (Asian Football Confederation):

“The tournament was run like a World Cup. From the accreditation to having a team bus, it was a very professional experience that I don’t think would be too different from what you’d expect in a major senior competition.

“When you look at the developments that we’ve had on the pitch as well as off it, it was a fantastic experience.

“We played against teams from South Korea, Japan and then Borussia Dortmund, who were all playing at a very high level.

“Our players were challenged by these teams on the pitch, but showed the talents and determination that we know they have to play well against these big teams and get the results that they did.”

City arrived at the Jeju tournament having been invited alongside several clubs from around the world, including LA Galaxy and PSV Eindhoven. Newcastle United was the only other club from the UK who were in attendance, with the team finishing third in their group behind Eindhoven and Japanese side Gamba Osaka.

The young Bluebirds were drawn into Group E, alongside Borussia Dortmund, Kashima Antlers and Busan IPark. 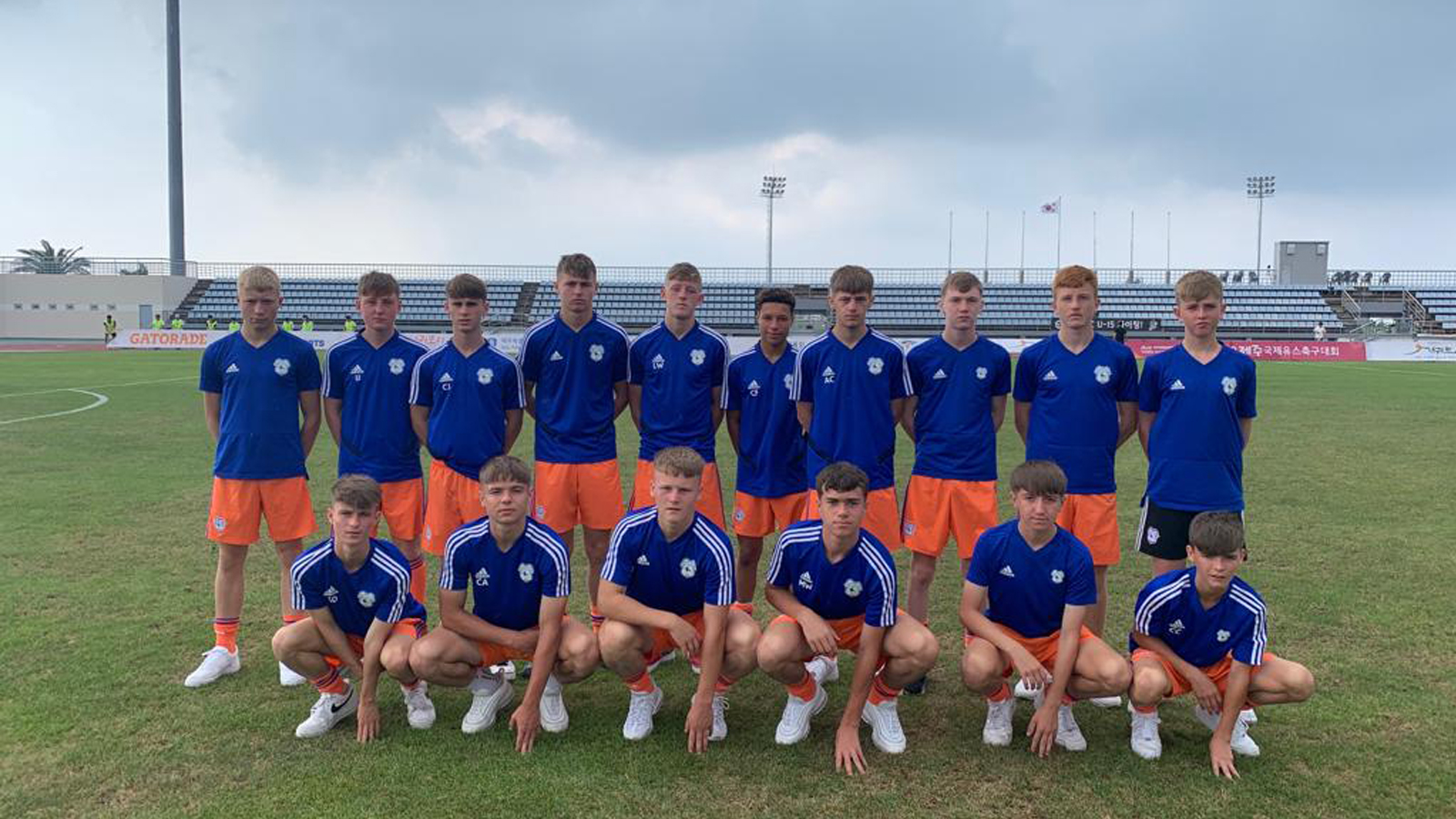 City’s opening match of the tournament on the evening of Tuesday, August 13th against Busan IPark, defeating the Korean side 2-1. After going 1-0 down early on, Cian Ashford secured a brace against the side, scoring a goal in each half and securing the victory for his side.

The young Bluebirds’ next match was against Japanese side Kashima Antlers, with the match kicking off the morning after their first match, giving the side little respite. This time it was James Crole who scored a brace for City, with both sides level at 1-1 by half-time. In the second half, Kashima took the lead early, with Crole scoring again to equalise. However, a third goal for the Japanese outfit gave the Antlers the lead with 20 minutes remaining, eventually handing City their first defeat of the tournament. 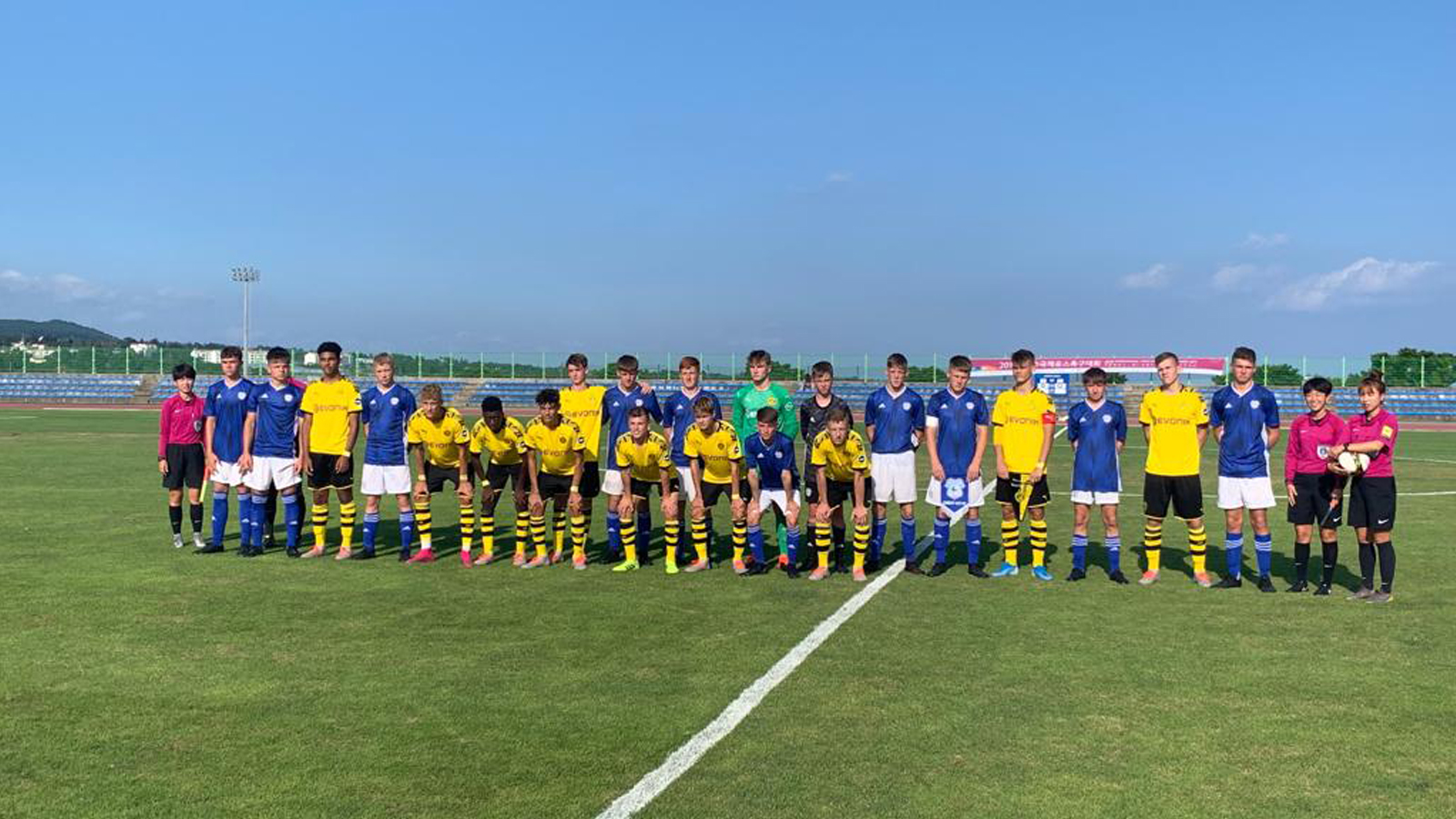 Facing German side Borussia Dortmund, the young Bluebirds’ third match was their final of the group stage. City got off to a great start by scoring early through Crole, though the Black and Yellows led by half time.

Extended their lead to 3-1 at the start of the second half, City’s young side once dug deep to chase an equaliser. Ashford subsequently bagged his second brace of the tournament, and made the score 3-3 by the time the final whistle blew.

With that, City finished in second place on their group table behind Dortmund, who made it through to the Quarter-Finals.

“We are really proud of the way that they performed on the pitch, and while we didn’t win every game we certainly had some massive learning moments that helped them develop.

“I’d say that not only did they improve their own personal game while on the pitch, but their ability to collectively work as a team to pull through tough moments.

“The exhaustion, heat and back-to-back games along with the quality of the opposition lead to a hugely beneficial experience for the players.

“This is probably the best experience that we’ve ever been able to give our players that would be the closest to a major tournament for a footballer.

“We’d like to extend our thanks to the organisers and to everybody who have supported the Academy’s opportunity to go to Jeju, as well as the Club for their support in getting the programme up and running.

“This experience has been invaluable, and it’s hopefully one that we can continue in the next season.” 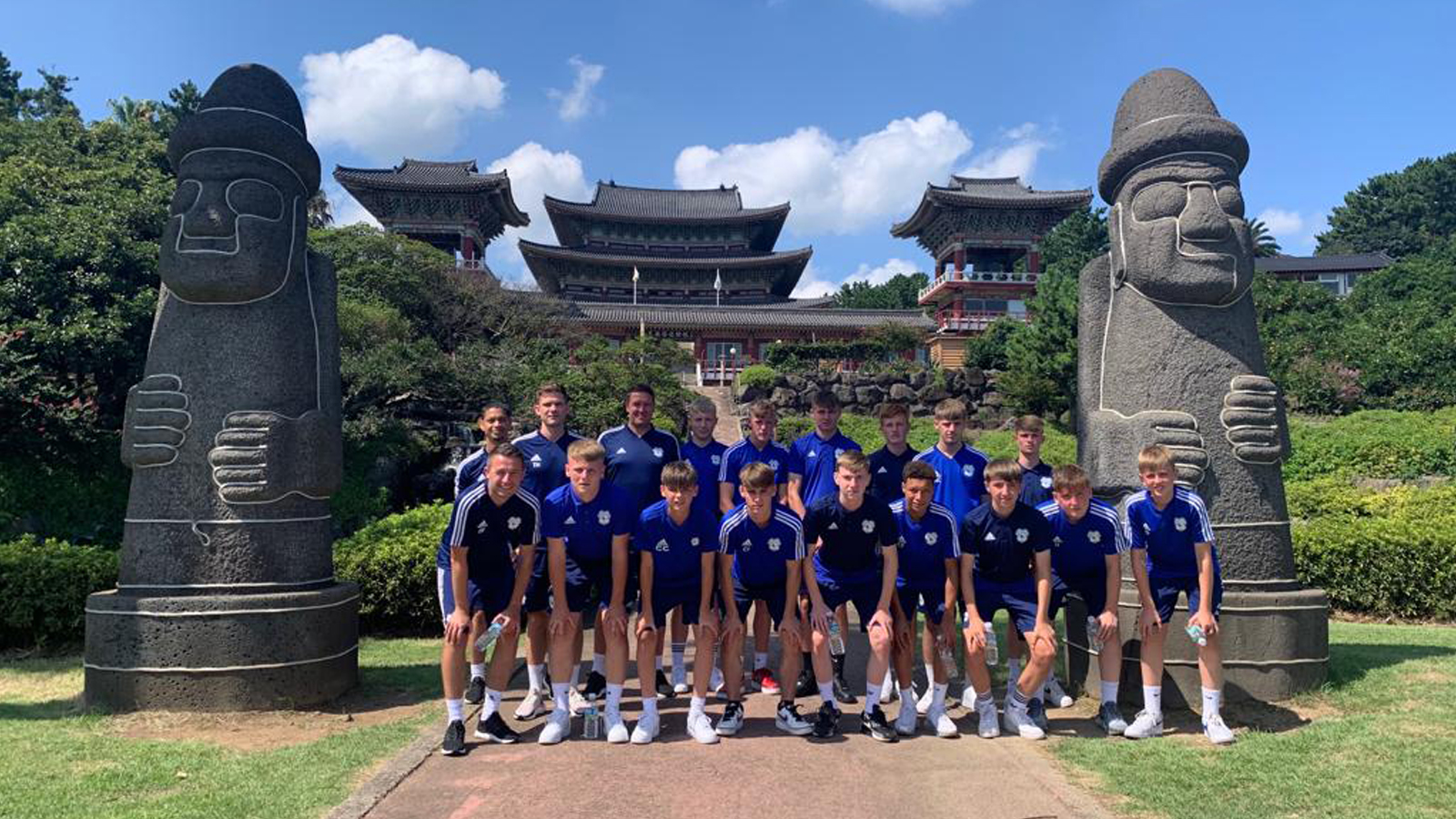