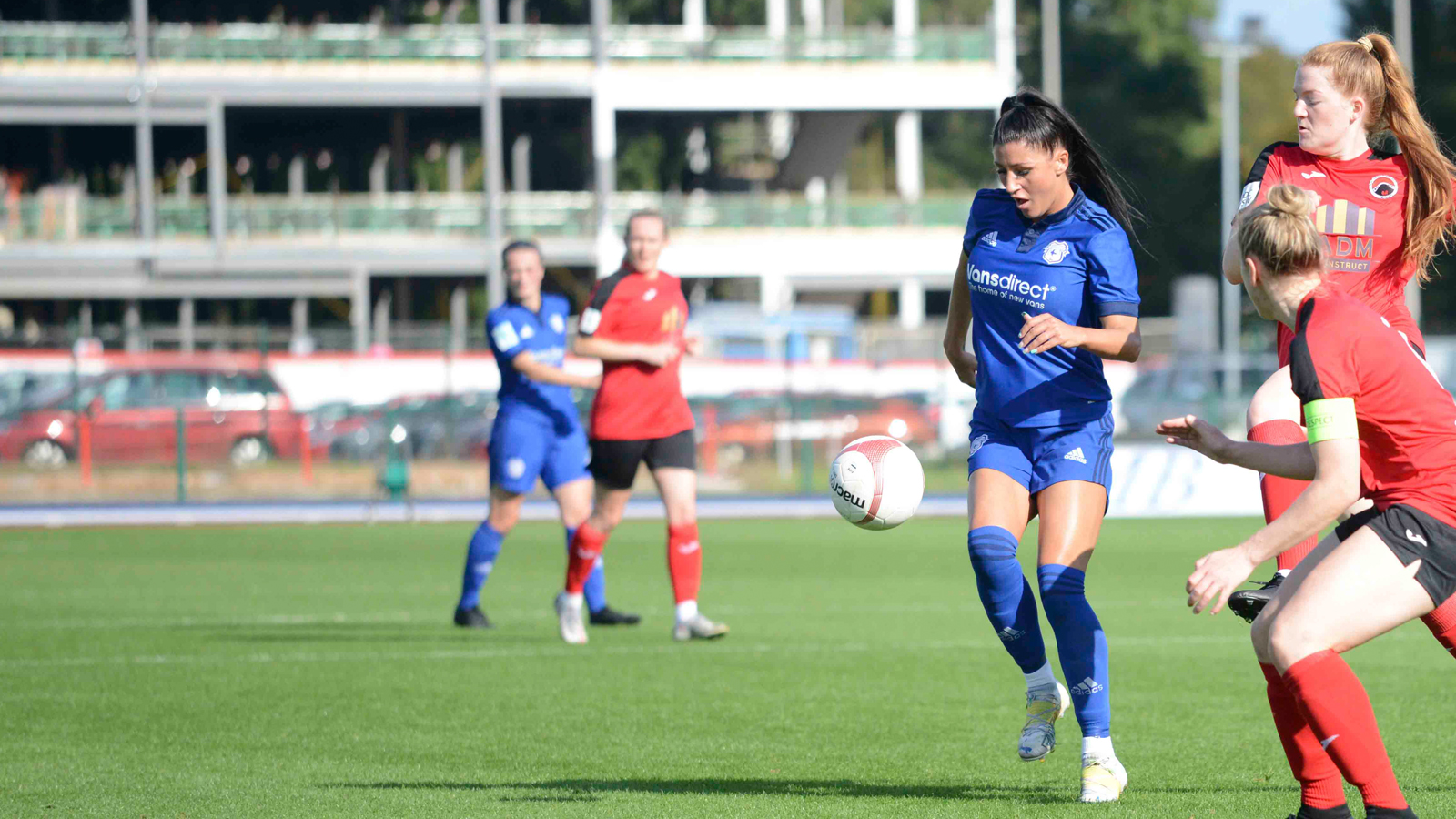 Iain Darbyshire made three changes to the side that fell to a narrow defeat to Swansea City Ladies last week, with Zoe Atkins, Lily Billingham and new recruit Hollie Smith coming into the starting XI.

City came out of the blocks quickly and were rewarded for doing so, taking the lead in the third minute. A fantastic first touch from Broadhurst allowed her to lift the ball over Erin Brennan to give the Bluebirds an early advantage. Darbyshire’s side instantly looked for a second, with Poole forcing a save out of Linnets goalkeeper with a half-volley from inside the area.

The Bluebirds found joy on the wings, with Lisa Owen crossing excellently for Williams, whose header was saved by Brennan. Despite City’s fast start, the visitors posed a danger on the counter, as Mackenzie Olden beat the offside trap, only to be denied by fantastic work from Ceryn Chamberlain to clear.

Price’s set-piece deliveries were a danger all afternoon, as City doubled their lead in the 28th minute, with Broadhurst heading home from a corner to net her second goal. Just minutes later, industrious midfielder Seren Watkins tried her luck from distance, forcing save from Brennan with a powerful drive.

City continued their impressive first-half performance, as Price’s free-kick was headed into the bottom corner by Broadhurst in the 34th minute to secure a remarkable hat-trick. The Bluebirds had another chance before the break, with Atkins’ effort from Price’s corner saved by Brennan, ensuring City went into the interval with a 3-0 lead.

Much like the first-half, the Bluebirds started the second period on the front foot, as Price’s corner fell to Atkins in the box, whose goal-bound effort was blocked. Atkins was again involved in another chance for the Bluebirds, flicking narrowly wide from Owen’s low cross.

Darbyshire’s side continued to press forward and added a fourth goal in the 62nd minute, as Atkins found Williams free on the right side of the box to fire home. Atkins then turned from provider to goal-scorer, getting on the scoresheet in the 69th minute, turning into the net from Price’s corner.

The Bluebirds continued to create opportunities, with Williams going through on the left, only to be denied by Brennan’s fine save. The visitors looked to counter and forced a chance through substitute Taite Trivett, whose effort at goal was saved well by Chamberlain.

City were clinical however, as Price’s delivery from the right fell to Poole, who fired into the bottom corner. In the dying minutes, Barry pulled one back, as a shrewd finish from Olden got the Linnets on the scoresheet. Darbyshire’s side reacted well, as Price’s stunning long-range strike added a seventh goal. City return to action next week as they travel to the USW Sports Park to face Pontypridd Town on Sunday, December 5th, 2pm KO.

“It was a great bounce-back performance following a disappointing result last week,” Iain began. “We played some incredible football throughout the game. Our build-up play, our patience in possession, moving the opposition from side to side and finding a spare player was excellent.

“Credit to the girls, they could have been sulking and down after last week, but we knew we had a great performance in us and we’ve bounced back really well.”

Commenting on the performance of right-back Ffion Price, who scored and recorded four assists, Darbyshire added: “That takes her up to 16 assists this season - what a player. We’ve worked hard on our full-backs and how we build up play. They’re very important to us.

“We know teams are going to mark our forward players really tight, so our full-backs are always going to be the spare players. Credit to Ffion, her set-piece delivery is second to none.”

After a superb first-half hat-trick, Danielle Broadhurst added: “We’re all delighted. We’ve worked hard in training all week to bounce back from last week. We played some really good football and for me personally, I’m delighted to get on the scoresheet.

“I wouldn’t have scored those goals without the team behind me. Ffion’s assists are great every week, they’re always on point, so that always makes chances for players like myself.”