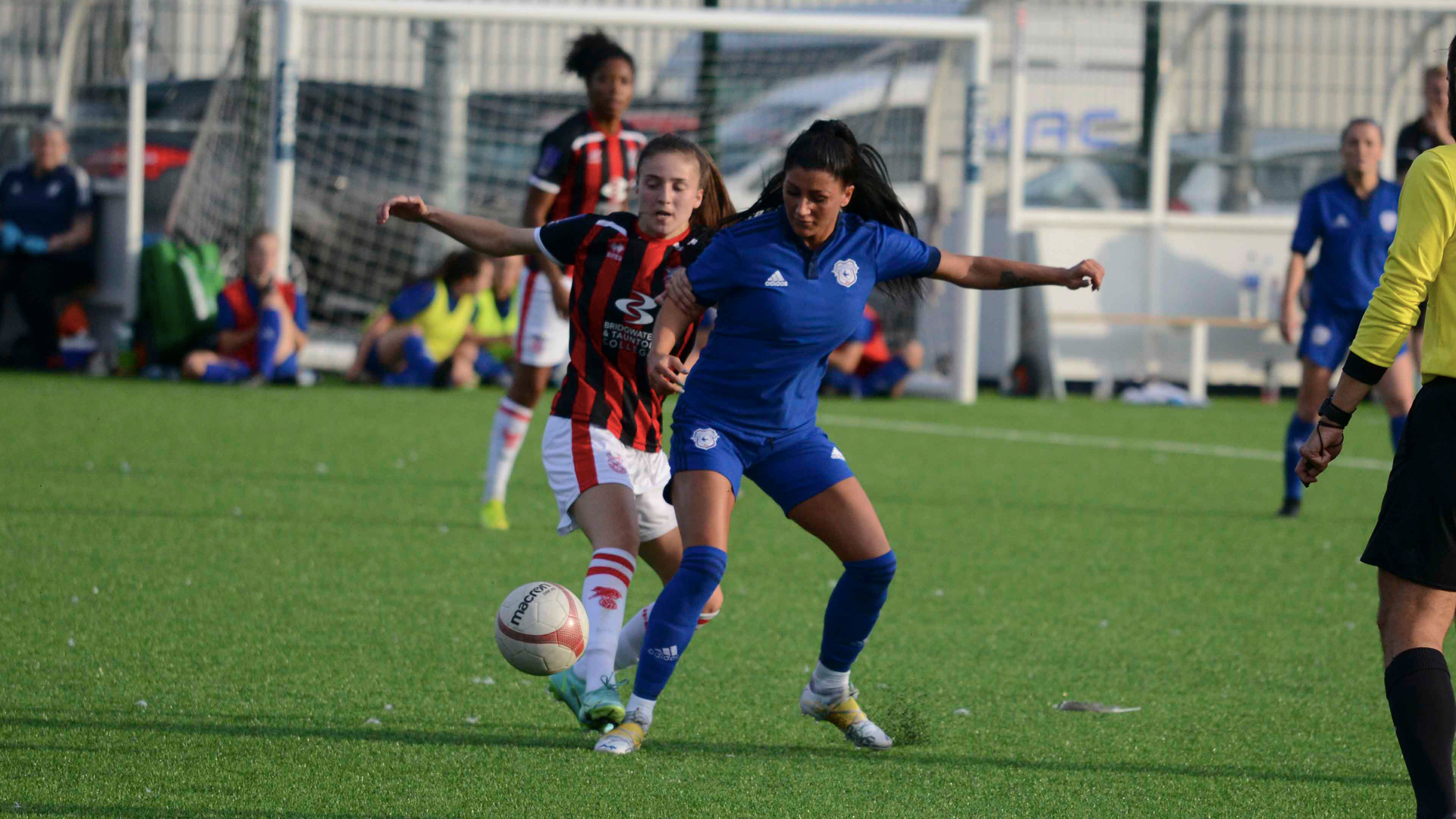 Seren Watkins and Zara Mujica were welcomed into the starting eleven for the first time, following their substitute appearances for the Bluebirds in the opening pre-season fixture against Keynsham Town.

Mujica saw plenty of the ball in the opening exchanges, as the National League South side put the pressure on. City had chances of their own though. Zoe Atkins unselfishly played in Danielle Green down the right rather than shooting from 20-yards on 16 minutes. Green's powerful effort was somehow tipped around the post.

Our opponents managed to find the net for the first time after 21 minutes with an impressive curling strike from the edge of the box. They doubled that advantage seven minutes later from the penalty spot, following an alleged push in the penalty box.

Darbyshire's side reduced the deficit four minutes before the break. Last season's top scorer Phoebie Poole broke clear. Her rasping drive was pushed away, but onto an onrushing defender, who diverted the ball into her own net.

The competitive and exciting pre-season match continued to give - with Bridgwater making the most of a final opportunity before the half time whistle to once again gain a two goal lead.

The away side added a further goal immediately into the second half, but the Bluebirds refused to be overawed by their confident counterparts.

City winger Green continued to use her pace to cause issues in the second half and she saw two shots saved. The first effort, after 49 minutes, was held well. The second was a chance of opportunity, with the Bridgwater goalkeeper rushing out and rashly clearing. Green's strike from 40-yards 62 minutes into the match was eventually gathered by the recovering 'keeper.

After 68 minutes, Cerys Pinchard came on for City, appearing in her final match before moving to America for college. Fellow substitute Lily Billingham did superbly to pluck the ball out of the air and get a dangerous cross into the box one minute after coming on alongside Pinchard, but Alana Murphy was impeded in the area before she could reach the ball.

City netted their second of the evening with seven minutes remaining. Catherine Walsh's driven free kick was tipped away, but new Bluebird Emily Bayliss was on hand to slot into the empty net.

The hosts made it a nervy final few moments by scoring a third goal with 89 minutes on the clock. Green finally rewarded for being a thorn in Bridgwater's side all evening, stealing the ball from the goalkeeper and lashing into the goal.

Sadly, this late comeback came a little late to force a draw from the fixture. The Bluebirds though showing their strengths against determined opponents and gaining more important minutes ahead of the early September league return.

“We chose our pre-season games carefully. We wanted to test ourselves against opposition from the English leagues that are perceived to be at a high level, and they definitely were,” said head coach Iain Darbyshire after the match.

“They were very technical. They had a great shape and it was a great challenge for our girls physically, tactically and mentally. That’s exactly what we wanted. It was great to see the girls fight back and learn as the game progressed.

“I thought my players were outstanding. Our new players, some of the senior players and also the youngsters we threw in too were unbelievable.

“We’re happy. We got everything we wanted out of the fixture, and more. They’re a really good opposition, who will do well in their league next season.”