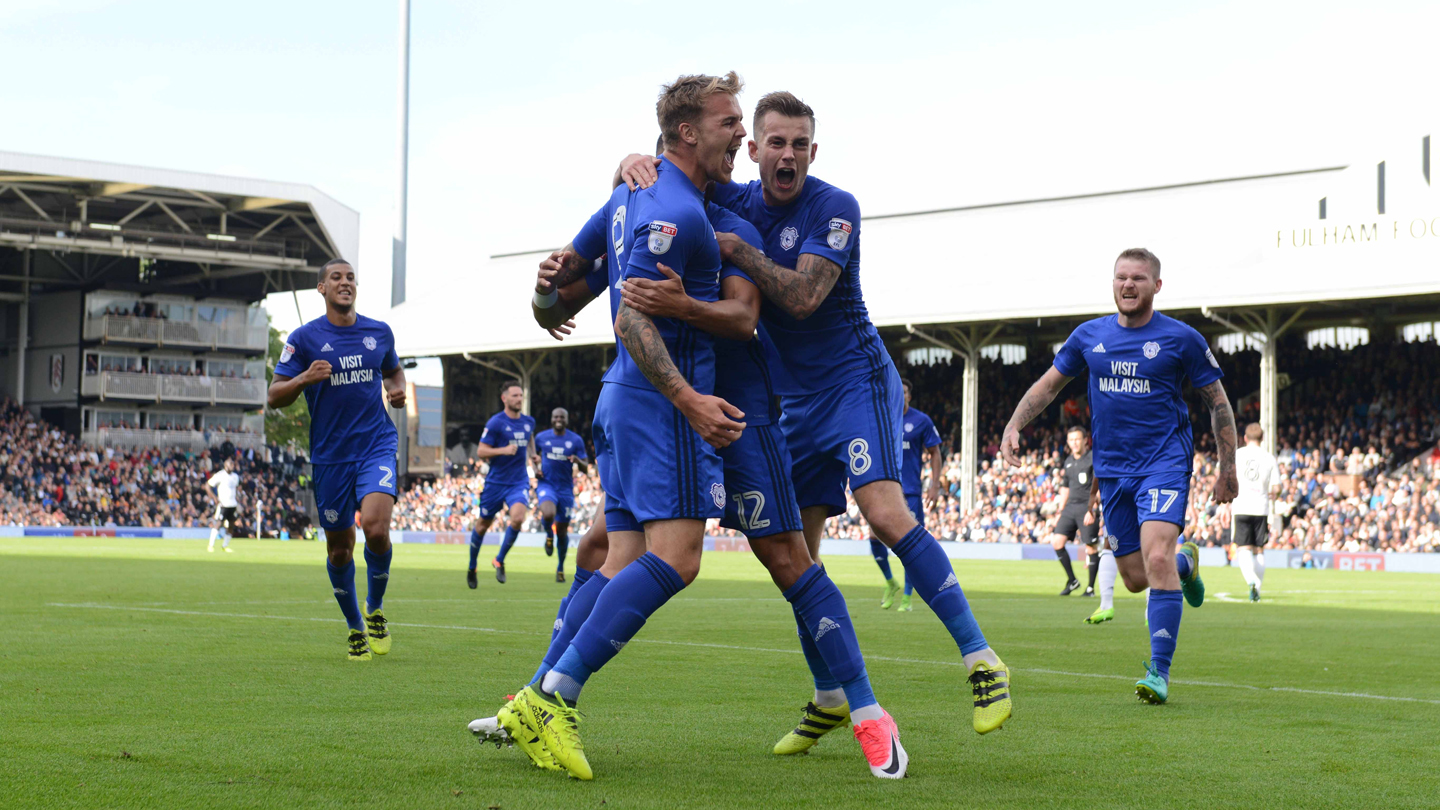 Match report for Fulham vs Cardiff City on 09 Sep 17

Danny Ward's late goal saw Cardiff City secure a 1-1 draw with Fulham at Craven Cottage - the point maintaining the Bluebirds' unbeaten start to the season and their first-place position in the Sky Bet Championship table.

Cardiff City began the quicker of the two sides and put the Fulham back line under pressure from the offset.

Fresh from his Sky Bet Championship Player of the Month Award win, Nathaniel Mendez-Laing propelled the Bluebirds forward with his direct running on the right.

City’s first real openings came just after the five-minute mark as Junior Hoilett won two free-kicks - the first hitting an arm in the Fulham wall just outside the box. Unfortunately, the Canadian international fired the second dead ball opportunity over.

The Cottagers fluid attacking line-up including the likes of Floyd Ayité, Yohan Mollo and Ryan Sessegnon put the Bluebirds under some pressure at points in the opening period.

Mendez-Laing continued to cause Fulham problems though, with one cross almost finding a way to Kenneth Zohore in the six-yard box.

Fulham’s threat increased as the interval approached as Mollo curled a free-kick inches past Neil Etheridge’s post. City also had to rely on a fine last-ditch challenge from Joe Bennett to deny Kevin McDonald, before Etheridge made an excellent double save from Stefan Johansen and Sessegnon’s efforts.

The final chance of the half fell to the visitors though, as Joe Ralls dragged a long-range shot wide of the post after driving forward with the ball.

Into the second half, and Mendez-Laing and Ralls both saw efforts blocked, before an audacious back-heel from Aron Gunnarsson nearly caught David Button out following a corner.

Fulham then managed to swing momentum back in their favour though, as Ayité hit a post before Bennett had to block Johansen’s effort off the line, with Etheridge stranded outside the box.

The Cottagers found the opener on the 75th minute as another fine tackle from Bennett thwarted Ayité, only for the ball to fall to Sessegnon, who confidently swept home.

With the Bluebirds’ 100% record under threat, City did manage to find a way back into the game. Neil Warnock had introduced Danny Ward and debutants Liam Feeney and Craig Bryson onto the pitch, and his change soon paid off.

Feeney received the ball on the right and swung in a superb left-footed cross, which Ward rose to meet - heading home his first league goal for City in front of the 3,500 travelling fans.

While Fulham substitute Oliver Norwood saw one effort fly over Etheridge’s bar, the Bluebirds had two chances to snatch all three points in injury time.

First, Feeney saw a cross come back off the bar, as it almost dropped into the net to deceive Button. Then, a superb counter-attack from City saw Feeney and Ward combine again, with the forward inches away from connecting with a low cross in the Fulham box.

The final whistle then blew, with the Bluebirds losing their 100% record, but continuing their unbeaten start to the 2017/18 campaign. As a result, City maintained their position at the summit of the Sky Bet Championship table.