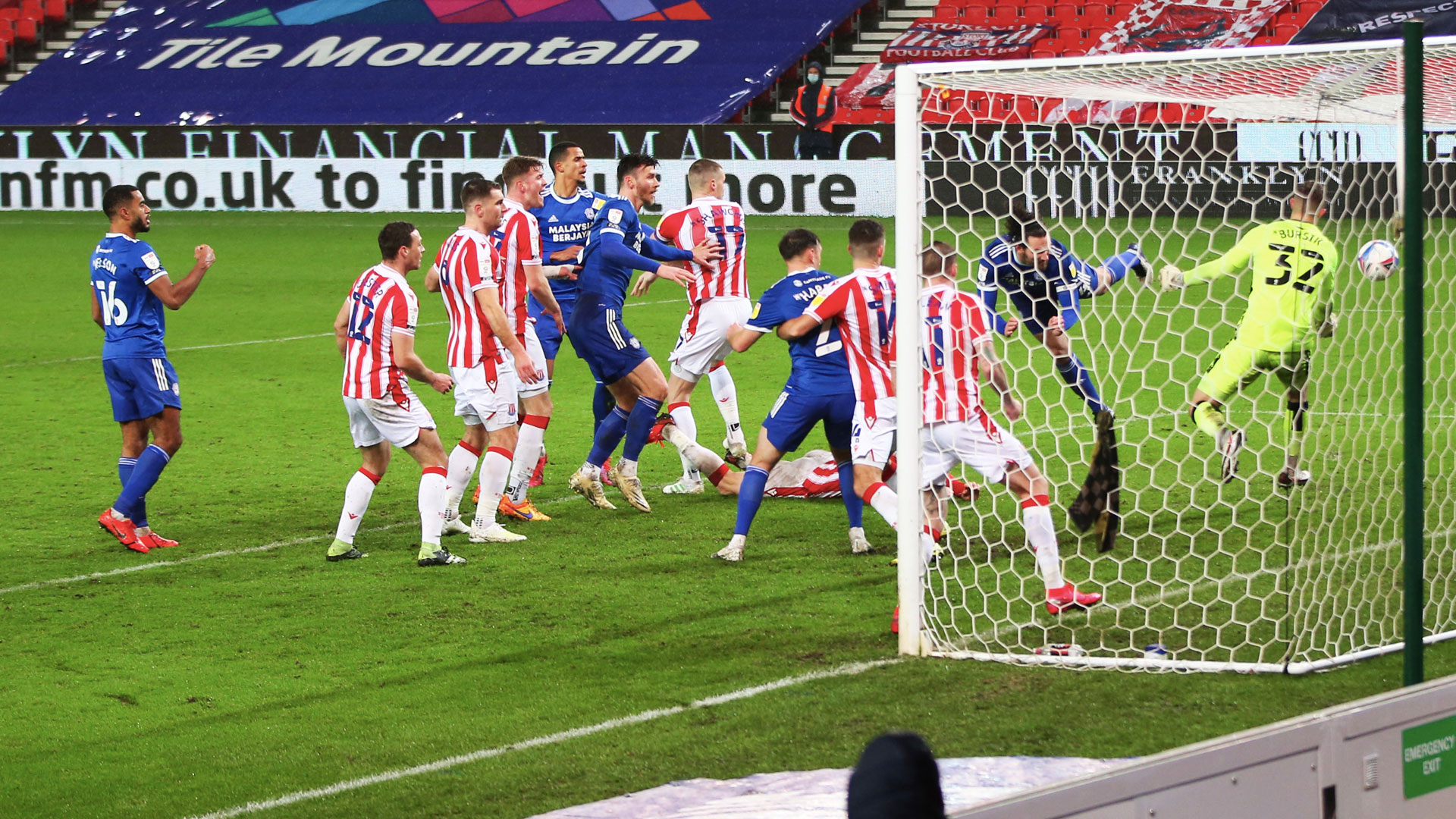 Mick McCarthy’s men will face Stoke City at Cardiff City Stadium on Tuesday, March 16th. The Potters travel to
the Welsh capital to take on the Bluebirds, with the midweek match kicking-off at 7pm.

There are two ways to get hold of the Cardiff City vs. Stoke City matchday programme.

The Bluebird – edition 19 for 2020/21, featuring Josh Murphy as cover star and feature interview, can be ordered and delivered in its traditional print format from Cardiff City FC SuperStore. Click here to buy your copy!

After avoiding the threat of relegation to League One last season, Stoke have set their sights on achieving a top six finish this time around. The Potters have been close to the Play-Off places for the majority of the campaign, but a poor run of recent results has seen Michael O’Neill’s side fall away from the promotion picture over the past few weeks. Stoke come into tomorrow’s clash sitting in 11th position, five places and 13 points away from the coveted sixth spot.

From their 36 Championship fixtures this term, the Potters possess a perfectly equal record of 12 wins, 12 draws and 12 defeats, which has seen them accumulate 48 points. O’Neill’s men are one position and one point behind Millwall, although they are being closely pursued by 12th place Bristol City, who sit behind them on goal difference only.

Stoke have been unable to break into the top six since the turn of the year, and have won just three of their past 16 league matches. All three of those victories, over Sheffield Wednesday, Luton Town and Wycombe Wanderers, came at the Bet365 Stadium, with the Potters still searching for their first away victory since a 1-0 win over the Chairboys in the reverse fixture at Adams Park on December 2nd. In their most recent outing, Stoke suffered a 3-0 loss at the hands of fellow promotion chasers Middlesbrough, their sixth away defeat of the campaign.

Nick Powell has struggled with injuries in previous years, but has enjoyed a sustained run in Stoke’s starting eleven this season. The former Manchester United man has made 30 starts for the Potters this term, highlighting his status as one of the club’s top attacking talents in the process. With 11 goals and two assists to his name, Powell has been central to Stoke’s push for a Play-Off spot, and will be hoping to continue his fine personal form until the end of the campaign.

Steven Fletcher arrived at the Bet365 Stadium during the summer months, joining on a free transfer from Sheffield Wednesday. The 33-year-old, who was previously signed by Mick McCarthy for Wolverhampton Wanderers, has produced eight goals and four assists from 29 Championship appearances this term, reminding defences across the division that he still possesses a clinical ability in front of goal. The Scottish international has started Stoke’s previous three league matches, recording two assists.

Harry Souttar joined the Potters in 2016, but only made his league debut for the club at the start of the current campaign. A central defender, Souttar has spent time on loan at Ross County in his native Scotland and with Fleetwood Town in recent years, but has become a key part of Michael O’Neill’s defensive unit this term. The 22-year-old has made 30 league appearances for Stoke this season, with three goals and one assist, and was named as the club’s Player of the Month for October 2020.

Stoke’s last visit to Cardiff City Stadium came back on November 26th, 2019, with the Bluebirds recording a 1-0 victory over the Potters. Leandro Bacuna scored the only goal of the game on that occasion, firing into the roof of the net from close range to hand City all three points.

Tuesday’s fixture will be the Potters’ fourth trip to CCS, with a record of one win, one draw and one defeat from their previous three visits. The two sides played out a 1-1 Premier League draw in the Welsh capital in April 2014, with Marko Arnautović breaking the deadlock just before half time and Peter Whittingham levelling from the penalty spot.

Stoke’s solitary victory at our home stadium came in January 2011, during an FA Cup Third Round Replay. Following a 1-1 draw at the Britannia Stadium, with goals coming from Michael Chopra and Tuncay, the two sides were again unable to be separated after 90 minutes of replay action, with extra time being required. The additional thirty minutes saw Jon Walters net a brace for the Potters, setting them off on a Cup run which eventually ended at Wembley Stadium; Tony Pulis’ side narrowly missed out on the trophy, losing 1-0 to Manchester City in the Final.