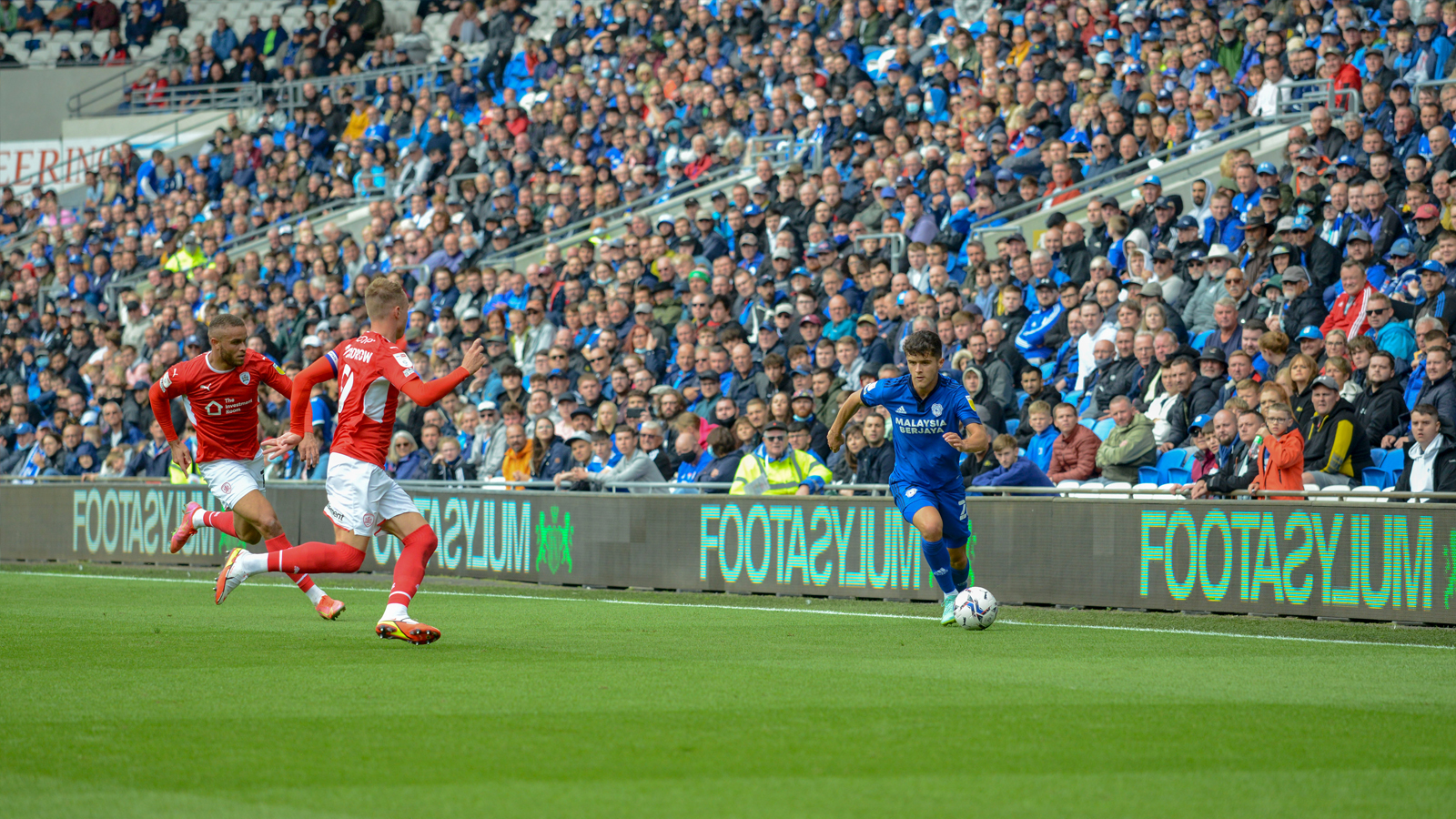 The Bluebirds kicked-off their 2021/22 Sky Bet Championship campaign with a 1-1 draw against Barnsley at Cardiff City Stadium.

Mick McCarthy handed full City debuts to Ryan Giles, James Collins and Mark McGuinness, with several other Bluebirds playing in front of a full home crowd for the first time, as supporters made a very welcome return to Cardiff City Stadium after 18 months away from competitive action.

Before kick-off, players, staff members and supporters from both clubs stood for a moment of silent reflection, remembering those we have sadly lost since we last attended a match together. They will be, forever, Bluebirds.

With both sides getting re-familiarised with the roar of the crowd during the first few minutes of league football this season, it was the visitors who enjoyed the first real chance of the game. The lively Carlton Morris picked up the ball inside the penalty area and curled a shot on goal, though his effort cleared Dillon Phillips’ crossbar.

City looked to find a breakthrough through James Collins, who linked up well with Giles on the left throughout the first period. The striker broke free and attempted a delicate chip after 11 minutes, though his namesake in the Barnsley goal, Bradley Collins, was equal to it. Minutes later, Giles showed his searing pace to break free of his marker and cross for Leandro Bacuna, though the midfielder was unable to find the target.

McCarthy’s men thought they had taken the lead through Collins after 26 minutes, with the striker nodding home from close range. However, the summer signing was in an offside position when he made contact with Curtis Nelson’s initial header, seeing the flag raised and the goal disallowed. At the other end, Phillips was called into action by Barnsley’s Cauley Woodrow; the forward did well to get a low shot away, with the City stopper producing a fine, one-handed save to tip the ball around the post.

Curaçao international Bacuna had two opportunities in the opening minutes of the second period, and was unfortunate not to find the opener. The midfielder firstly fired a shot on goal through a crowd of bodies, though the ball was easily held by Collins in the Barnsley goal. Moments later, the midfielder received a similar cross from Giles on the left-flank to his earlier chance in the first half, but was unable to convert from close range.

In similar fashion to the Bluebirds in the first half, the Tykes also had a goal disallowed by the assistant referee. A smart move culminated with Dominic Frieser slotting the ball into the net from close range, though the winger had acquired possession in an offside position, seeing his goal correctly disallowed with the scoreline remaining blank.

Minutes later, City took the lead thanks to an excellent header from Marlon Pack. Giles’ pinpoint delivery from a corner kick found the midfielder, who leapt high and directed a superb headed effort into the bottom corner of the Barnsley net, picking up the new season exactly where he left off during 2020/21, having netted our final goal of the previous campaign.

The home lead lasted for fifteen minutes, with the Tykes eventually equalising thanks to a well-worked move from back to front. New recruit Josh Benson delivered an excellent cross-field pass from left to right, finding Toby Sibbick on the right flank. The wing-back tore forward into the space ahead of him, before driving a low effort across goal and past Phillips into the far corner of the net.

The Bluebirds enjoyed more possession of the ball in the final 15 minutes of the match, but could not find a way past the Barnsley backline, with the visitors only afforded half-chances on the counter attack as the match drew to a conclusion.

The full-time whistle brought the opening game of the season to a close, with the points being split between South Wales and South Yorkshire. Next up for McCarthy’s men is a Carabao Cup Round One clash with newly promoted League Two side Sutton United, who travel to CCS on Tuesday, August 10th.