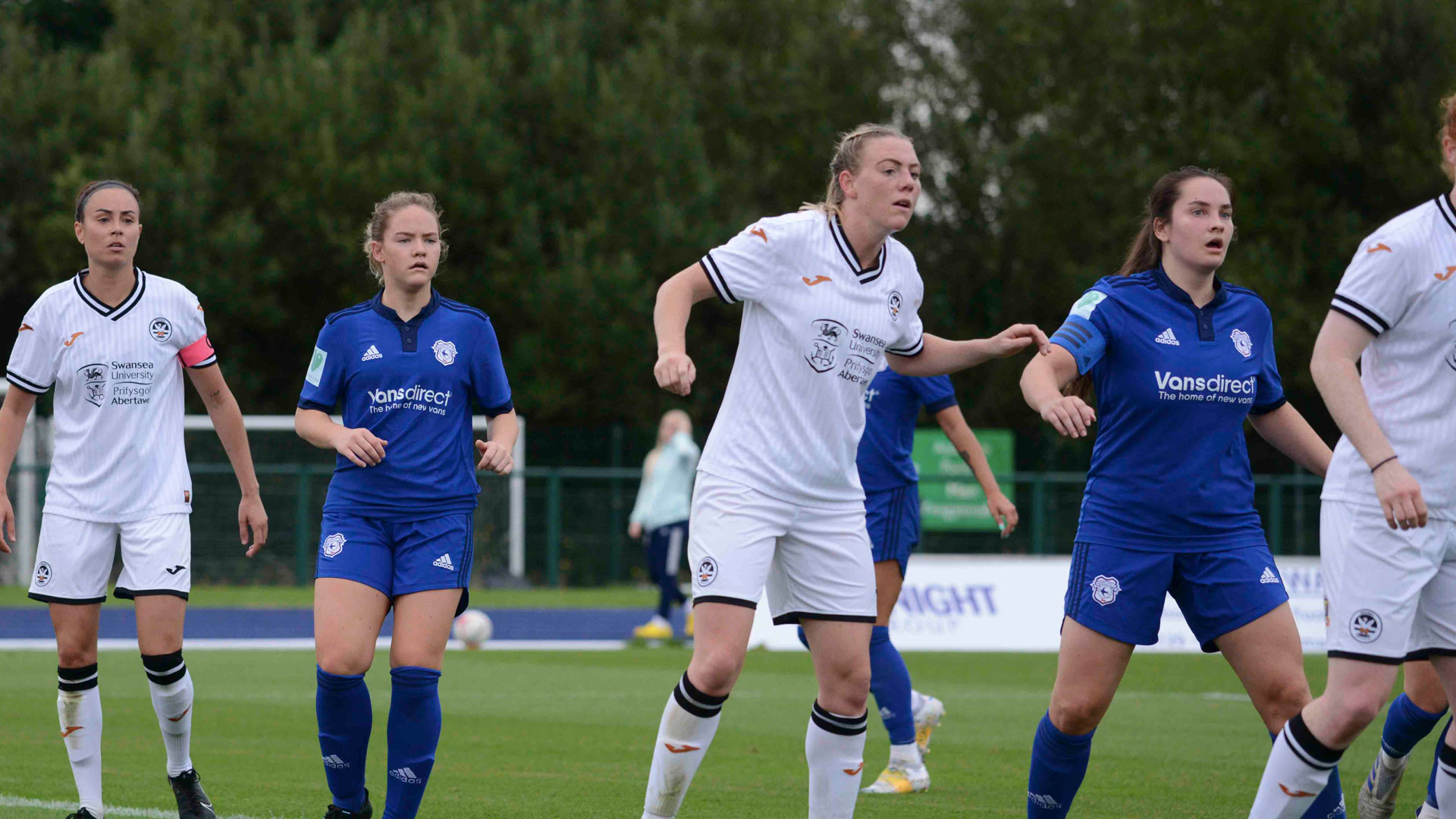 Cardiff City FC Women booked a place in the final of the FAW Women’s Cup, with a dramatic 4-3 win over South Wales rivals Swansea City Ladies at Penydarren Park.

Despite Laura Davies’ early opener, City fought back with a heroic performance, as Amy Williams equalised, before Phoebie Poole netted clinically from the spot.

Shortly before the break, the Swans levelled through Jessica Williams, but the Bluebirds regained the lead, as Seren Watkins’ corner found its way into the net following a mistake from goalkeeper Claire Skinner.

Chloe Chivers equalised once more for Swansea after the interval, but it was Poole’s sublime finish that proved to separate the two sides, as City edged an action-packed encounter to secure their final spot.

Boss Iain Darbyshire made one change to the side that fell to defeat to Cardiff Metropolitan University last time out, with Williams coming into the starting XI. The Bluebirds started brightly, with some good work from winger Williams earning a corner, which skipper Siobhan Walsh headed narrowly over the woodwork. Chris Church’s Swans responded well however, taking the lead in the fourth minute, with Davies heading home from Chivers’ corner.

City continued to pose a threat and were rewarded for doing so, as Lily Billingham set Williams through, who finished brilliantly to level the scoring in the 12th minute. Williams was again involved as the Bluebirds immediately searched for a second goal, as the ball fell to the winger at the back post, only for her shot under pressure to fly just over the woodwork.

In a brilliant first-half performance, City were awarded a penalty, as Ellie Lake was adjudged to have handled in the area, with Poole stepping up to convert clinically from the spot in the 37th minute. The Swans responded swiftly however, equalising through Williams, who headed home from Chivers’ corner.

Darbyshire’s side showed great character to regain the lead just before the break, as Seren Watkins’ dangerous corner delivery found the net following a mistake from goalkeeper Skinner, sending the Bluebirds into the interval with a 3-2 lead.

The Swans came out of the blocks quickly in the second period and levelled the scoring once more, as Chivers struck a free-kick into the top corner. City responded brilliantly again, with Billingham playing Poole through, who finished sublimely to restore the lead in the 52nd minute.

The Bluebirds looked dangerous on the attack all afternoon and went close to a fifth, as Ffion Price crossed excellently for Zoe Atkins at the back post, whose effort was agonisingly wide. Church’s side looked to get back into the contest, with defender Alicia Powe finding space in the box from a corner, but headed over the woodwork.

Despite late pressure from the Swans, the Bluebirds held on to earn a place in the FAW Women's Cup final!

City have done it! A heroic performance sees us book our place in the FAW Welsh Women’s Cup final!

“That was an incredible performance from all the girls. We set out before the game and we knew what we needed to do to force them into mistakes. When we had our chances, we had to take them. Swansea are a very strong side, they’re defending champions and top of the league for a reason.

“We took the game to them today and I thought we were by far the better team over the 90 minutes. The girls couldn’t have played much better. We knew they were going to have chances, a couple of set-pieces went in for them, but we knew that if we took the game to them, we could cause them trouble.

“Today is up there for me. We’ve had some good days at this club. To take the game to them like we did is just testament to the young talent that we’ve got coming through. If we can continue like this for the next few years, add that consistency, then we can do anything as a squad.”