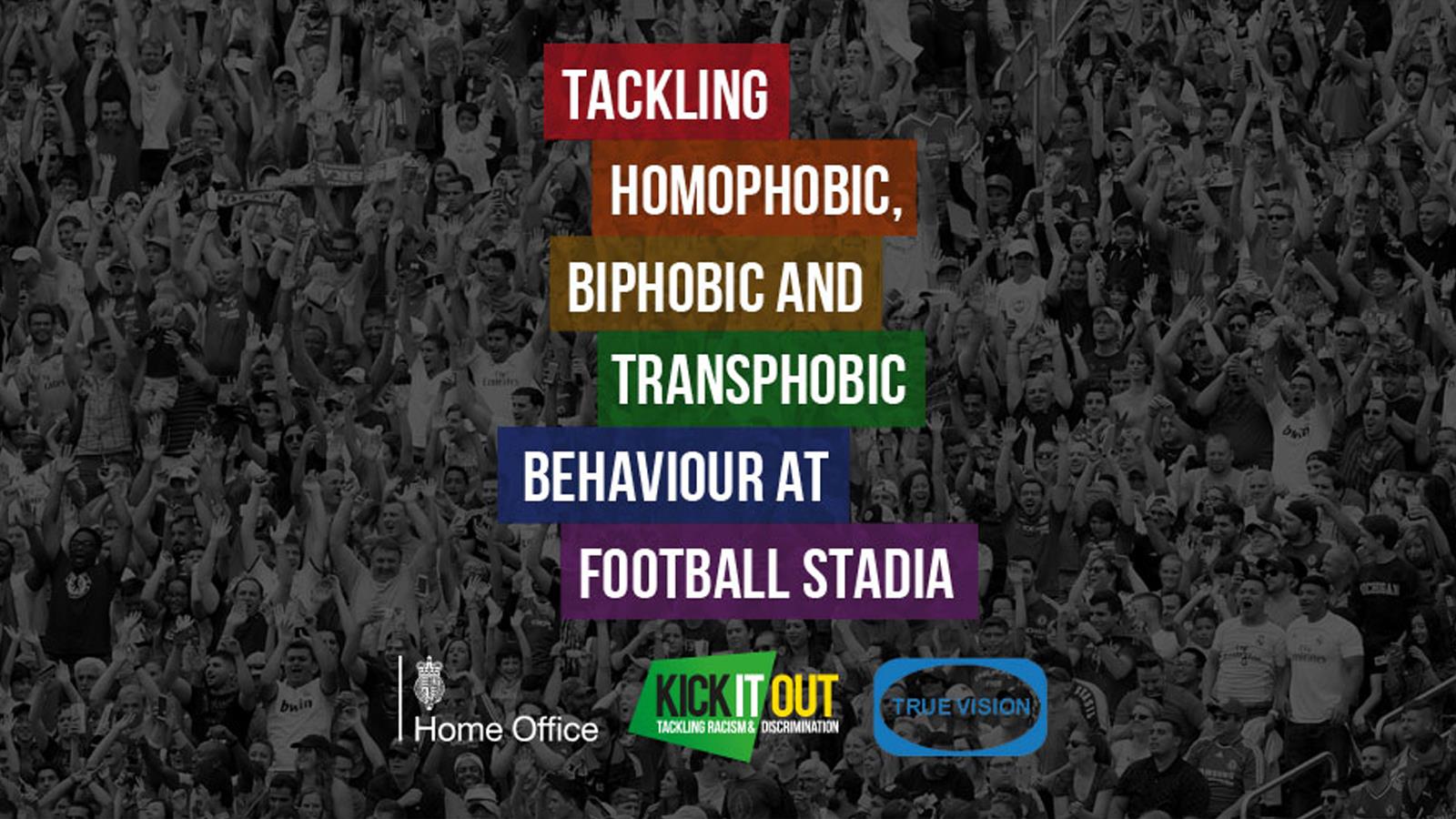 Kick It Out, the Home Office and True Vision team up to raise awareness of discrimination...

Kick It Out, football’s equality and inclusion organisation, has partnered with the Home Office and True Vision to release a series of informative and engaging resources that raise awareness of homophobic, biphobic and transphobic (HBT) discrimination within football stadia.

Forming part of Kick It Out’s ‘Call Full Time On Hate’ initiative for the 2016-17 season, which is urging the collective force of football to encourage inclusion and deter hate from the game, the resources have been launched on the same day as the Department for Culture, Media and Sport (DCMS) host a roundtable meeting on homophobia in sport.

A short film raising awareness of LGB&T inclusion in the game has been created in partnership with Doodle Films. The film follows five individuals from the LGB&T community as they reflect on the impact of HBT behaviour on their lives and the importance of reporting discrimination in football.

A comprehensive booklet and small pocket guide have also been designed to assist stewards and safety officers in their understanding of HBT discrimination and how to effectively challenge this behaviour.

Following the recent publication of the Culture, Media and Sport Select Committee report on homophobia in sport, which stated that stewards and all staff at all levels must be supported when confronting and reporting homophobia, these new materials will equip match-day stewards and safety officers with the confidence to report HBT discrimination at football matches.

‘Tackling Homophobic, Biphobic and Transphobic Behaviour at Football Stadia’ is a 12-page booklet which has been produced with support from Just A Ball Game? and Inside Inclusion. The booklet includes information on what HBT discrimination is and the role stewards and safety officers can play in reporting and challenging this behaviour.

Ten key steps to tackling HBT discrimination have been included in the small pocket guide accompanying the booklet. 10,000 pocket guides have been produced and distributed to stewards and safety officers across Premier League and English Football League clubs.

Discrimination reports relating to sexual orientation made up 17% of reports to Kick It Out in 2015/16, a rise of 4% on the previous season.

All these resources will be available to download digitally for free on the Kick It Out website – www.kickitout.org.

Roisin Wood, Chief Executive Officer at Kick It Out, commented: “With LGBT History Month recently taking place in the UK, it is important that Kick It Out continues to raise awareness of the issues which still blight our national game, including homophobia, biphobia and transphobia.

“These topics have long been taboos in the game, but thanks to the proactive work of campaigners we are beginning to see the football community recognise the positive impact LGB&T inclusion is having on the sport.

“With support from the Home Office and True Vision, Kick It Out has been able to produce three essential resources which will help stewards and others to understand and have confidence in effectively challenging homophobic, biphobic and transphobic discrimination within football stadia.

“Kick It Out also encourages all matchday participants, including players, club staff, stewards and supporters to download the organisation’s free reporting app, available on the App Store and Google Play.”