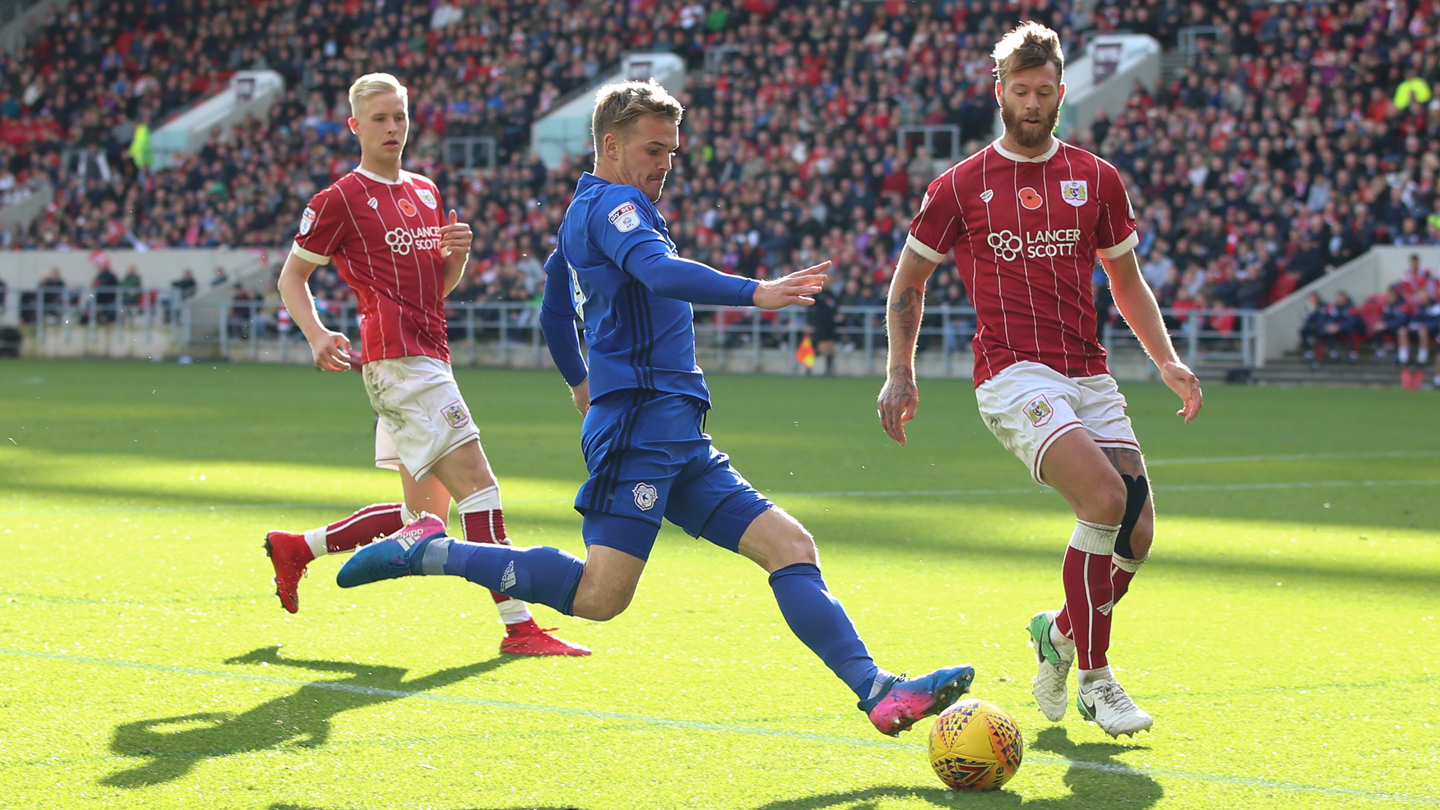 Ten-man Cardiff City battled to a 2-1 defeat to Bristol City at Ashton Gate on Saturday afternoon.

The Bluebirds were dealt an early blow in the midday kick-off as Nathaniel Mendez-Laing was forced off the field through injury after just six minutes. Neil Warnock sent on Liam Feeney to take his place on the right flank, and the winger combined well with Callum Paterson as City did the early pressing.

Several Paterson long-throws caused issues for the home defence, while Joe Ralls and Sol Bamba both had chances to break the deadlock following early corners.

However, despite the Bluebirds’ promising start, the home side took the lead in the 20th minute. Bobby Reid found Callum O’Dowda in too much space down the left side, and the winger fired the ball into the far corner.

The goal put the wind in the hosts’ sails as Milan Djuric and Joe Bryan both saw efforts well saved by Neil Etheridge.

City had a great chance to draw level when Feeney was brought down as he drove towards the box. Junior Hoilett’s inventive free-kick struck the wall though, while Hordur Magnusson's dead ball for Bristol City was blocked by Sean Morrison.

Just five minutes from the interval, City found that equaliser through Omar Bogle. Hoilett, who had switched to the right side, did superbly to evade several markers with a fine piece of skill before finding the forward, who drilled the ball home.

Having already been booked, Marlon Pack was lucky to remain on the pitch at the beginning of the second half following a late lunge on Bamba.

And Pack was in the thick of the action ten minutes later. The Bluebirds’ job was made significantly more difficult as Bogle was dismissed for a rash challenge on the midfielder.

Warnock’s men needed a fine stop from Etheridge to keep the scores level as Reid dribbled into the box and fired low at the ‘keeper. But the hosts then went ahead on 66 minutes, when centre-half Aden Flint headed in from a long-throw.

Despite their numerical disadvantage, City looked to respond as substitute Danny Ward headed a Paterson cross wide, and Ralls rifled narrowly over when the ball broke to him 25 yards from goal.

Lee Peltier did well to deflect Josh Brownhill’s powerful strike onto the post and wide as the hosts looked for a third.

But City then piled on the pressure in injury time as Danny Ward was twice fouled just outside the box. The newly-introduced Lee Tomlin curled the first free-kick onto the roof of the net, while the second resulted in a corner.

A scramble in the box and an opportunity for Hoilett gave the Bluebirds their final chance to salvage a point, but the home defence hung onto their lead to secure a narrow victory.