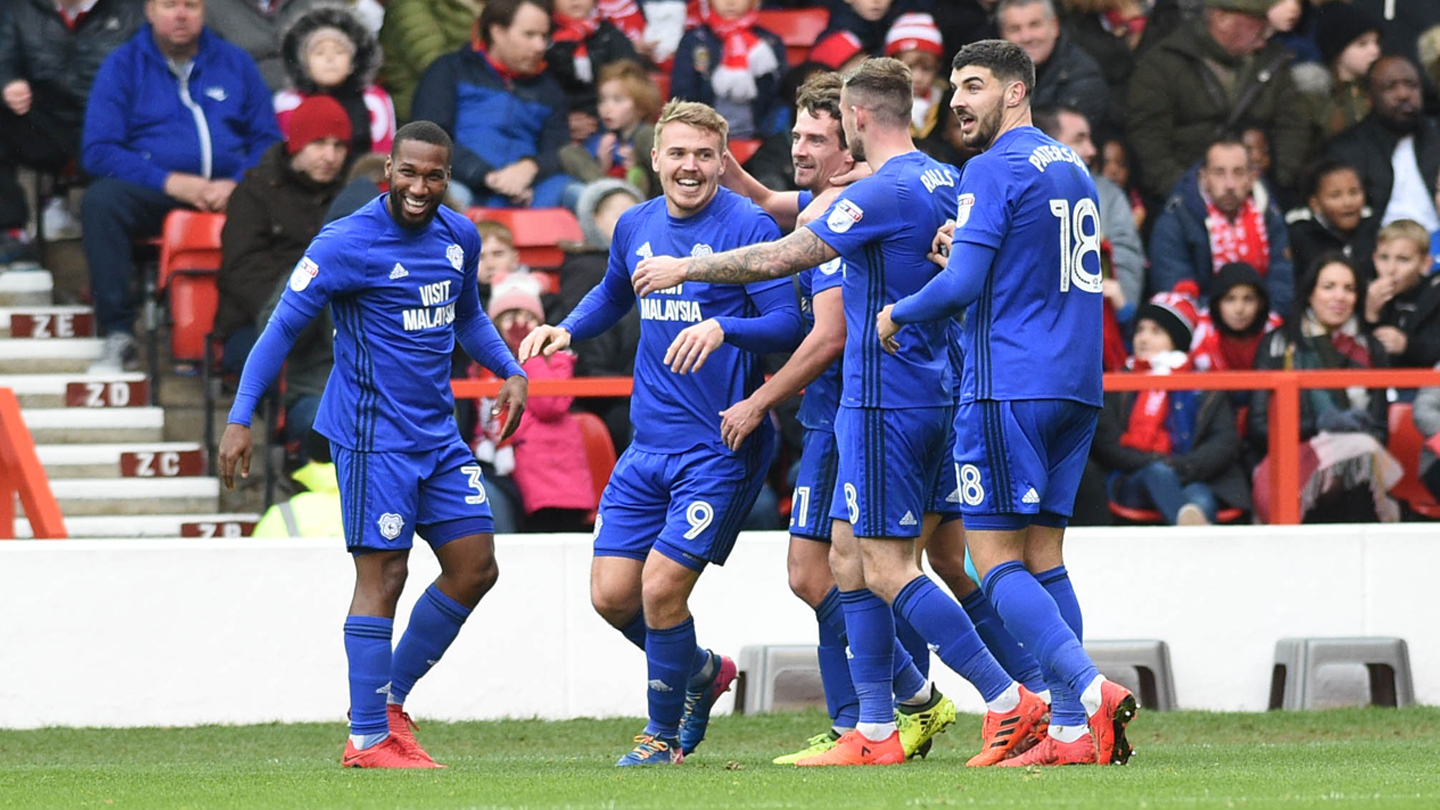 Cardiff City secured a third consecutive victory and clean sheet as they battled to a 2-0 away win over Nottingham Forest.

The Bluebirds made one enforced change from Tuesday evening’s victory over Barnsley, with Loïc Damour deputising for the injured Aron Gunnarsson.

Joe Ralls lined up furthest forward of City’s midfield three and enjoyed an extra license to attack throughout an even opening period.

Forest full-back Armand Traoré looked to have a long afternoon ahead of him when he was shown an early yellow card for a late challenge on Callum Paterson.

But Forest then had the first clear opportunity of the game, as a clever free-kick routine led to Everton loanee Kieran Dowell letting fly. Sol Bamba did superbly to block his powerful drive though.

The Bluebirds then showed their ruthless streak as they broke the deadlock at the City Ground in the 24th minute. Joe Ralls’ lofted free-kick found City skipper Sean Morrison, who headed the ball on to Junior Hoilett.

The winger then nodded the ball into the top corner, to open the scoring in unconventional style and give the Bluebirds the lead.

The hosts really should have equalised with half an hour played, only for Daryl Murphy to blast over when the ball was laid off to him from ten yards.

And City punished their hosts once again, catching Forest out after they had driven men forward in search of an equaliser.

Danny Ward doubled their advantage in some style - receiving the ball on the right, before cutting inside and rifling the ball into the far top corner from 30 yards.

After a half-time deluge, the conditions at the City Ground were somewhat more difficult in the second period.

That resulted in fewer chances at both ends, but the home side did have another gilt-edged opportunity when Tyler Walker side-footed tamely into Neil Etheridge’s hands when one-on-one.

The Bluebirds showed superb incredible commitment to the cause all over the pitch, with Joe Bennett and Sol Bamba putting their bodies on the line with fine blocks, and Damour showing no signs of tiring in the engine room.

Forest loaded the box as the full-time whistle approached, desperately looking to break through a resolute City defence.

But after six minutes of additional time, the Bluebirds stood firm and secured their third clean sheet on the bounce.