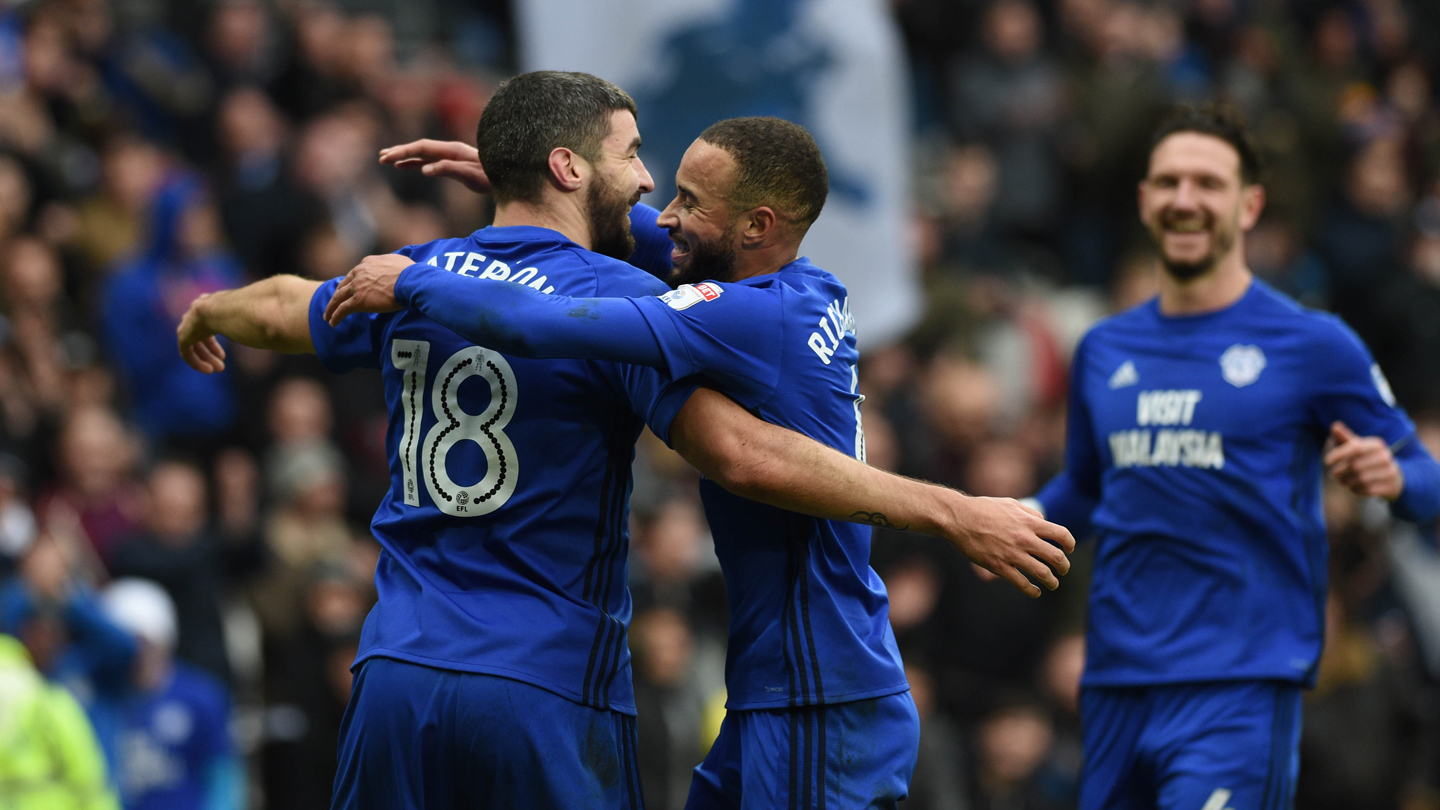 Match report for Cardiff City vs Sunderland on 13 Jan 18

Cardiff City defeated Sunderland 4-0 in the Welsh capital to move into second-place in the Sky Bet Championship.

Neil Etheridge returned to goal for the home clash, while Sol Bamba, Joe Ralls, and Junior Hoilett came into the starting eleven. Furthermore, Yanic Wildschut took his place on the bench, and had time for a quick 'Ayatollah'.

The Bluebirds’ first chance came after five minutes when Ralls’ crossed free-kick from 35 yards reached Callum Paterson, who headed on target but into the arms of Robbin Ruiter.

After 19 minutes, Ralls made a tremendous tackle on the halfway line, that Nathaniel Mendez-Laing took advantage of to stride forward and pass the ball to Hoilett on the right side of the area. The Canadian cut it back to Ralls who shot on target from just inside the area, but the goalkeeper gathered.

Ralls came close again four minutes later, when he hammered a half-volley on target from the edge of the area, forcing Ruiter to leap to his right, and tip the ball wide for a corner.

After 35 minutes, Paterson was fouled on the edge of the area, and Junior Hoilett stepped up to whip a free-kick that went agonisingly wide of the top left corner. The Bluebirds were creating chances at will and getting closer to scoring each time.

Six minutes later, Ralls intercepted the ball and was immediately fouled on the edge of the area. Hoilett stepped up again to whip a free-kick that Ruiter tipped wide for a corner. Hoilett’s set-piece found Sean Morrison, who nodded across goal to find Kenneth Zohore, whose header at goal was deflected over.

After the interval, City came close immediately when Paterson hammered a shot on target and Ruiter tipped wide of goal for a corner. Paterson looked determined to break the deadlock and leapt to connect with Ralls’ corner, his header cannoning off the underside of the crossbar and into the net, putting the Bluebirds 1-0 up.

City were given an added boost three minutes later, when Didier Ndong was sent off on his return to the team after mistiming a lunging challenge on Hoilett.

The Bluebirds took full advantage of the man advantage and went 2-0 up after 55 minutes. Zohore beat his man and drove forward before squaring the ball from the left side of the area to Ralls. City's no.8 lofted it over Ruiter, rippling the back of the net, and securing his seventh goal of the season.

City continued to attack in waves in hunt of a third goal. They came close after 72 minutes when Ralls hammered a shot towards goal from the right side of the area, before Morrison’s header at the back post went agonisingly wide of the target.

Paterson then did brilliantly to secure a brace and made it 3-0 after 80 minutes. Zohore’s free-kick from just outside the box deflected off the wall and towards Paterson, whose left-footed strike found the bottom right corner of the net.

Late into the four minutes of added time debutant, Yannick Wildschut, provided a through-ball for Anthony Pilkington who slotted home to make it 4-0. With the icing on the Bluebirds' cake, the referee blew his whistle as the Bluebirds secured a big home victory.