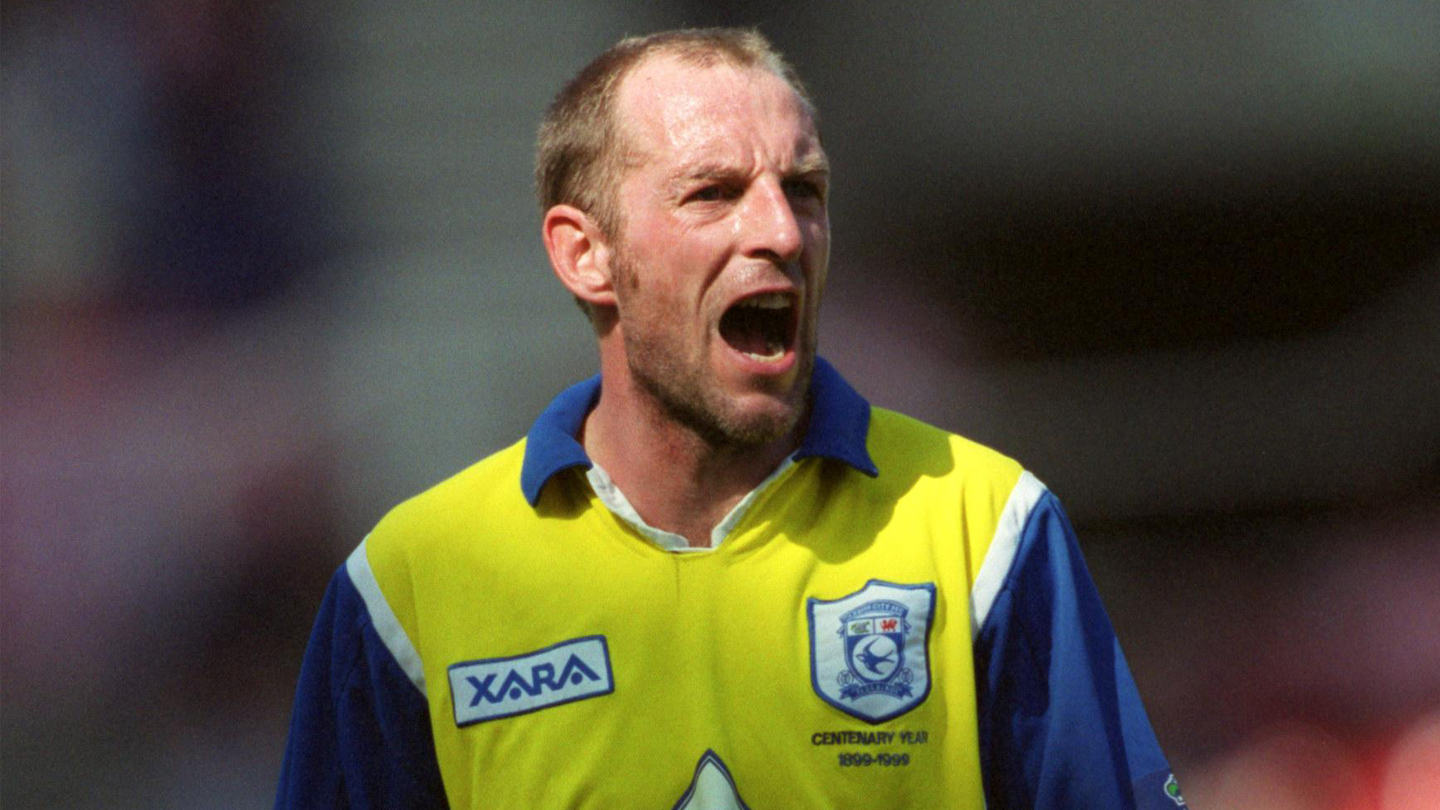 Recalling the career of the Cardiff City centre-half that helped the Bluebirds to two old Division Three promotions at the turn of the millennium...

Jeff Eckhardt was born on October 7th, 1965. Hailing from Sheffield, the young man began his footballing career as a youth at Sheffield United, having been signed by then-manager Martin Peters after performing well in a reserves match against Coventry City in 1981. By the 1985-86 season, Jeff played regular first team football for the Blades, who were in the Second Division. It was here that he was a roommate with teammate Ray Lewington, who was more experienced than the younger Eckhardt. Speaking with Cardiff City’s matchday programme a few years ago, Jeff elaborated: “Ray Lewington was at Sheffield United at the same time. The manager picked the hotel rooms then and instead of letting two old boys and two foolish kids room together, he’d put an old one with a young one. I was with Ray – he was a lovely bloke, we always got on well and still do. He used to tell me: ‘when I become manager you will be the first person I sign.’"

Lewington, who is now assistant manager for Crystal Palace, kept to his word, and the following season he became player-manager for Fulham aged 29, and almost immediately approached Eckhardt.

"I was on holiday and my girlfriend at the time was taking the mickey, saying he’d be coming to sign me. Within two-and-a-half hours my phone rang and it was him. I didn’t sign then as I was still in the first team at Sheffield United, but a year or two later I finally went.”

Jeff left Sheffield United for Fulham in 1987, and made his debut for the club in the November of that year, aged 22. The young player spent almost seven years at Craven Cottage, and became a crucial part of the squad for his versatility on the pitch, in addition to his work ethic. During his time at the club, Eckhardt made 249 league appearances for the Lilywhites, scoring 25 goals in the process. Looking back at his time with the club, who were in the third tier of English football for most of his time there, Jeff reflected: “I had six fantastic years at the Club. They were not the Club’s glory years, but I loved it; the football and the lifestyle. But as I got older, I realised that perhaps I had been operating in a comfort zone at the Cottage. I was Captain and knew I was going to get picked every week and took it for granted.”

Following Fulham’s relegation to the fourth tier in 1994, Eckhardt moved to Stockport County, where he made 67 appearances over the course of two years at the club. His move in 1996 to Cardiff City saw the defender once again playing in the old Division Three whilst entering his thirties.

“I wouldn’t say I was on my last legs, but I was twenty-nine and three-quarters I think, and at that age you are thinking that perhaps there isn’t a lot left in the tank. I got a three-year deal at Cardiff, which went on to be six in the end.”

Eckhardt’s role in the squad was as a utility player, and despite preferring to be played as a centre-half, he had natural goalscoring ability, and would often play in the midfield, and even occasonally as a forward. His approach to beginning his tenure at Cardiff City by remaining as a defender was clear, though scoring on his debut in a 1-0 victory against Brighton & Hove Albion did not help his case.

“I went to Fulham as a centre-half, but then I played midfield as we were short there. Then I went up to centre-forward and scored goals. I did the same at Stockport, and thought, if I go to Cardiff I want to go full circle and be a centre-half again. I don’t want to be messing around being mister utility.

“Thirty or forty minutes into my first game after everything I’d said about being centre-half when I signed, something happened and I had to go up top. I then took one on my chest and hit it on the half volley from twenty yards. Usually with me, I’d have missed it totally or hit the bar, but that one flew into the top corner.”

Cardiff City won promotion from the old Division Three twice during Eckhardt’s time at the club, as the defender racked up 231 league appearances for the Bluebirds before he left in 2001. A fan favourite from the off, Jeff recalled his relationship with the Cardiff City faithful, beginning with his debut appearance: “That was the start of my love affair with the fans, as I moved back to centre-half in the same game and split my head open, with blood coming down my face. That was it – we were linked together after that.

“I remember we were away to Northampton soon after and I’d played with a big bandage around my head. As I was doing the warm-up, I noticed Cardiff fans in the stands with bandages wrapped around their heads too!”

Following his time with the Bluebirds, Jeff continued to play football at Newport County, before a spell at Merthyr Tydfil. In a career spanning more than 15 years, Jeff Eckhardt made over 500 league appearances for several clubs, and is fondly remembered as a player for his versatility and willingness to give his all on the pitch.