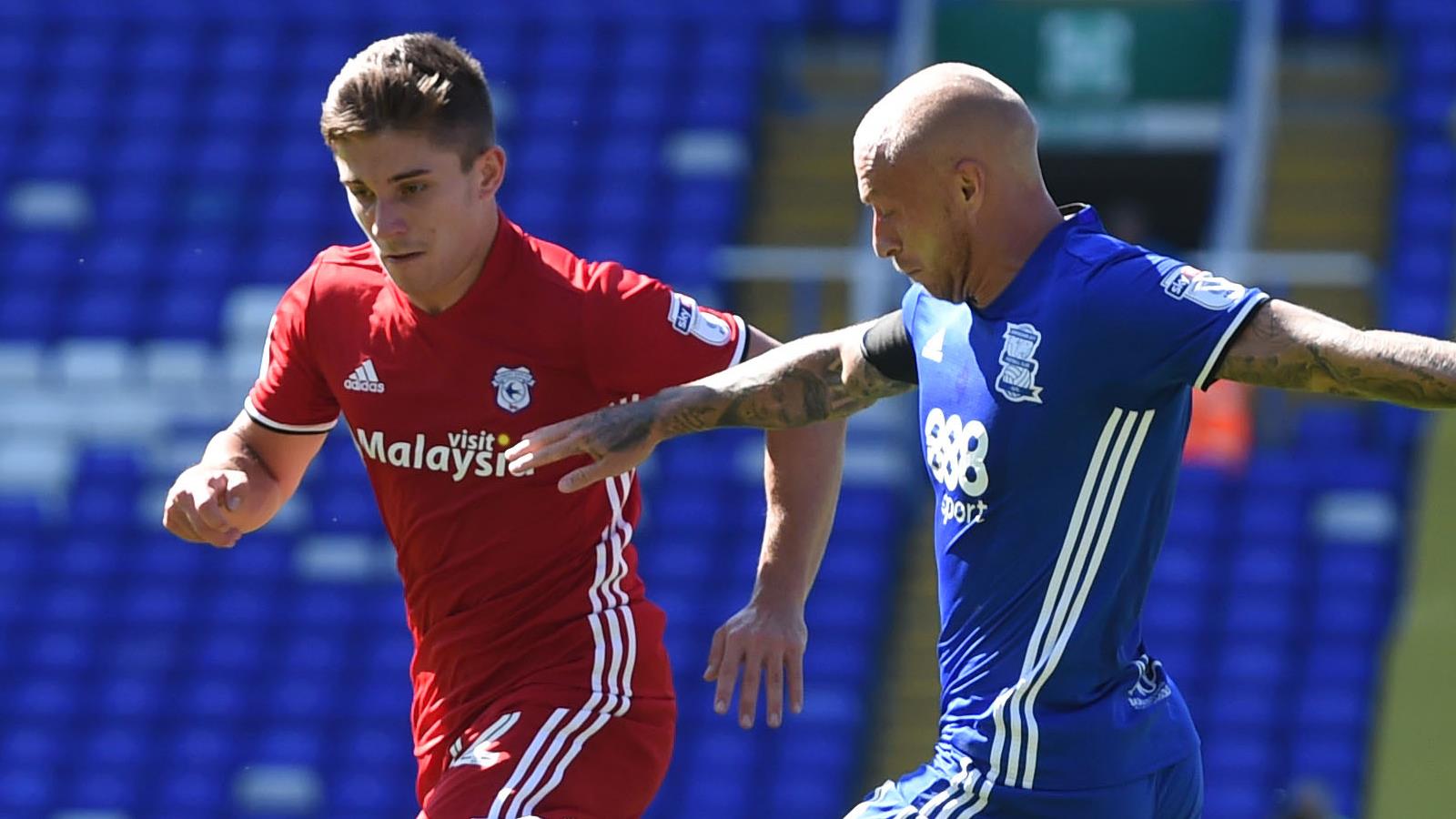 The Bluebirds and Birmingham City shared the spoils at St Andrew’s on Sky Bet Championship opening day.
City began in the Midlands adopting the 3-5-2 system with Declan John and new signing Jazz Richards occupying the wing back positions.
It was Paul Trollope’s men who started stronger with Lee Peltier and Lex Immers both testing Tomasz Kuszczak early on.
Birmingham’s first real opportunity of the match fell to Diego Fabbrini on 17 minutes, but his effort drifted harmlessly wide of goal.
Anthony Pilkington finished the 2015/16 season as Cardiff City’s top goalscorer and had his first chance of the campaign on 26 minutes. Frédéric Gounongbe’s nod on fell to Pilkington inside the area, but he was unable to lift the ball over the impressive Kuszczak.
Peter Whittingham had troubled Birmingham from the opening whistle with his dead ball ability. The City stalwart is known for connecting sweetly with the ball, but he would have had an early ‘Goal of the Season’ contender if not for Kuszczak. Whittingham firing towards goal on the volley from 30 yards out, only for the Polish goalkeeper to somehow tip the effort wide.
The City pressure was beginning to show, and the Bluebirds should have taken the lead on 34 minutes. Dec John’s endeavour down the left side saw him break into the hosts penalty box before playing he placed the ball across the area towards Gounongbe, only for the debutant to fire over the bar from a couple of yards out. While his first competitive appearance in a Cardiff City shirt will be remembered for that moment, Gounongbe’s strength and determination to lead the line was on display throughout.
The away side continued towards goal immediately after the half-time break with Kuszczak again required to be on hand when Ralls, Immers and Gounongbe attempted to meet John’s low cross. The Birmingham goalkeeper was on hand to gather following a penalty box melee.
While the Bluebirds dominated for large periods of the match, Birmingham arguably should have done better with a chance after 54 minutes. David Cotterill slipping the ball wide of David Marshall’s goal from the edge of the box.
The closest either side came to netting in this interesting opening day clash came on 63 minutes as Immers fired a half-volley from the edge of the penalty box against the Birmingham City crossbar, with Kuszczak beaten.
City’s final real opportunity coming on 88 minutes. Substitute Craig Noone scored a wonder goal for the Bluebirds in the opening day fixture of 2015/16 and almost did exactly the same one year later, striking wide of goal after cutting in from the right.
A special mention should go to the 1,803 Bluebirds fans who made the trip to St Andrew’s, loudly supporting the team throughout the match on a warm day in the Midlands.
FINAL SCORE: BIRMINGHAM CITY 0-0 CARDIFF CITY
Birmingham City: Kuszczak, Grounds, Shotton, Gleeson, Donaldson, Fabbrini (Storer, 71), Cotterill (Brown, 71), Maghoma, Spector, Davis (Tesche, 85), Morrison. Subs Not Used: Legzdins, Robinson, Solomon-Otabor, Vaughan.
Cardiff City: Marshall, Peltier, Manga, Connolly, John, Richards, Whittingham, Ralls (O’Keefe, 82), Immers, Pilkington (Noone, 82), Gounongbe (Zohore, 71). Subs Not Used: Moore, Ajayi, Morrison, Gunnarsson.
Attendance: 18,833 (1,803 Bluebirds).