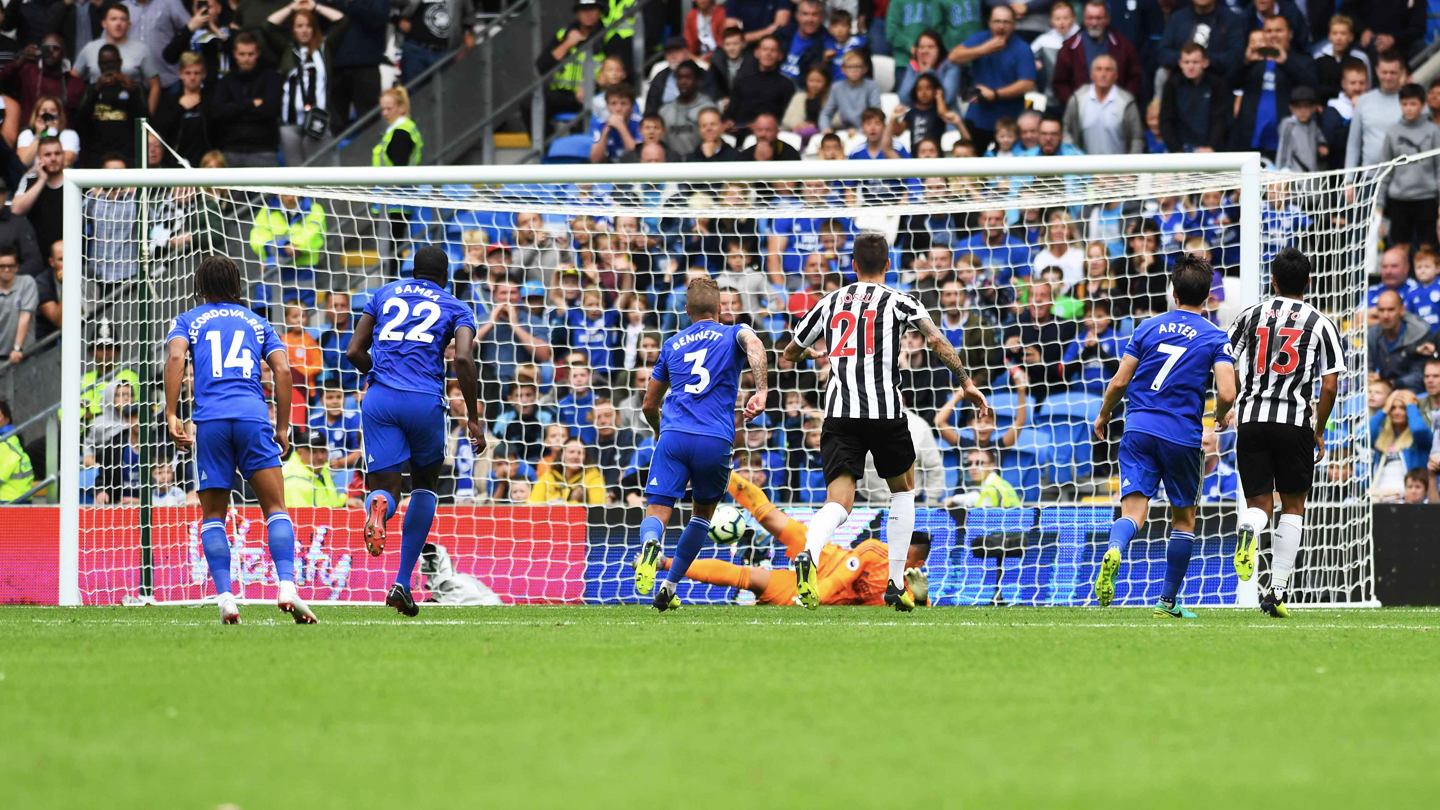 Neil Etheridge’s penalty save ensured the Bluebirds picked up their first Premier League point, with a home draw against Rafa Benítez’s Newcastle United.

Roared on by a crowd of 30,723, the Bluebirds looked the livelier side during the opening exchanges. Kenneth Zohore went close to catching out the Newcastle back-line on two occasions with his dangerous runs in behind. At the other end, Neil Etheridge did well to deny Ayoze Pérez twice in a matter of minutes, whilst Matt Ritchie saw yellow for a dangerous tackle on Junior Hoilett. Sol Bamba went close for the Bluebirds, seeing his close-range header blocked just metres from goal.

Making his competitive home debut, Josh Murphy grew into the game, and linked up dangerously with Zohore after 19 minutes. The winger persistently used his pace to beat Javier Manquillo, who was shown a booking on the half-hour mark. The Bluebirds continued to look threatening down the left flank; Joe Ralls found Joe Bennett with a superb pass, though the full-back’s cross could not quite be diverted on target by Zohore.

Newcastle’s best chance of the half fell to the lively Pérez, who found space inside the box but saw his volley saved by Etheridge. The Filipino stopper also calmly claimed Jonjo Shelvey’s free-kick, bringing the first half to a close with no goals to separate the sides.

The first major chance of the second half fell to Hoilett, who had two attempts within a matter of minutes. Firstly, his shot from the edge of the area was blocked by a flying Newcastle boot, before a free-header flew over the bar a few moments later. A golden chance fell to Zohore nine minutes after the restart, but the striker couldn’t find the target with a header from Ralls’ cross.

The Bluebirds dominated play in the second period, and went close again just after the hour. Zohore and Murphy linked up well on the left, with the striker bursting through. His low pass was diverted by Jonjo Shelvey, just as Víctor Camarasa was about to pull the trigger.

The balance tipped further in the Bluebirds’ favour after sixty-six minutes, when substitute Isaac Hayden was shown a straight red card. The former Hull man took out Murphy with a dangerous tackle, with referee Craig Pawson showing no hesitation in giving Hayden his marching orders.

Debutant Harry Arter almost broke the deadlock with fifteen minutes remaining, with a sweet drive. The midfielder drove forward and struck towards goal; his curling effort looked as though it was going to nestle in the bottom corner, only to swerve away from the post.

With a few minutes remaining, the Bluebirds went close once more from a Ralls corner. Zohore’s header from point blank range was blocked by a Newcastle defender on the line, and from the recycled ball the City striker headed wide of goal. Minutes later, a Shelvey free-kick from a dangerous area was blocked by the solid City wall.

As the match entered the final minute of added time, the Magpies were awarded a penalty, as Sean Morrison was harshly adjudged to have blocked a cross with his hand. Kenedy stepped up for United, but was thwarted by the impressive Etheridge, who capped off a wonderful personal display with a strong hand to deny the Brazilian, ending the game with the spoils shared.