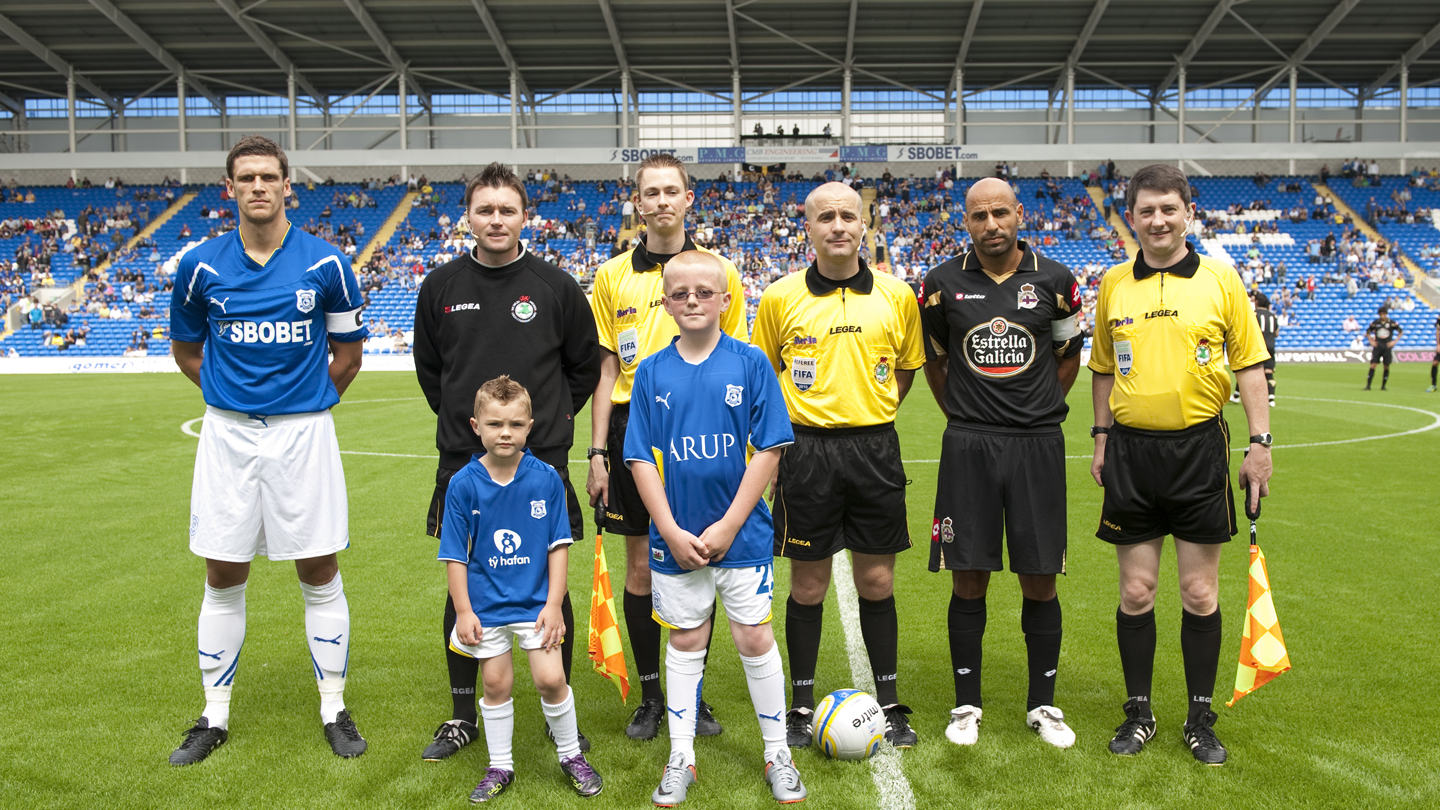 The visit of Real Betis on Saturday August 4th will provide the Bluebirds with one final fixture ahead of the Premier League campaign, which gets underway at AFC Bournemouth on August 11th.

In years gone by, City have hosted a number of prominent European clubs, with Betis becoming the latest side to have played in the Welsh capital. We take a look back at some other memorable meetings over the last few years….

After many famous European nights under the floodlights courtesy of the old European Cup Winners’ Cup, the Bluebirds welcomed our final continental visitors to Ninian Park on August 1st, 2008.

Managed by Marco van Basten, and with Dennis Bergkamp amongst the backroom staff, Ajax arrived in South Wales with plenty of stars for the City faithful to inspect, including soon-to-be World Cup Finalist Maarten Stekelenburg, silky Danish winger Dennis Rommedahl and formidable striker Klaas Jan Huntelaar. For the Bluebirds, goalkeeper Tom Heaton and striker Ross McCormack were amongst the home debutants. Defender Glenn Loovens made his last Ninian Park appearance, before moving to Celtic. With the VansDirect Trophy at stake, the match itself was a dull affair, with few clear-cut chances for either side. The best chance fell to Rommedahl in the second half, although Heaton made a comfortable save, ensuring a clean sheet on home soil which saw the trophy shared between the two clubs.

Real Betis will become the fourth Spanish side to take to the field at CCS against the Bluebirds, nine years after Valencia travelled to South Wales. In our final fixture before the 2009/10 season got underway, City fans welcomed several Spanish stars to our new home. David Villa and David Silva travelled to CCS, but neither featured against the Bluebirds in the summer sunshine.

City keeper David Marshall was making his home debut but was unable to prevent Valencia taking the lead through Nikola Zigic’s header. The Bluebirds had a chance to go level when trialist Vincent Pericard was bundled over inside the penalty area, but McCormack saw his spot kick saved by Miguel Angel Moya. With five minutes remaining, winger Joaquin, who could return to CCS with Real Betis on Saturday, put the result beyond doubt with a good strike after a clever free-kick routine – ending pre-season on a high for Valencia and their then-manager Unai Emery, who has recently taken up the reigns at Arsenal.

Spanish opposition returned to the Welsh Capital twelve months later, as the Bluebirds took on Deportivo la Coruña. The Branquiazuis had finished tenth in La Liga the previous season but were on the back foot against the Bluebirds for most of the match. Ross McCormack and Michael Chopra both went close for City, whilst Michel and Riki looked lively for the visitors.

As the game seemed to be heading towards a goalless draw, the Spanish side showed their class and netted the only goal eight minutes from time. Juan Carlos Valeron exchanged a neat pass with Saúl Fernández, who set up substitute striker Marco Dioni to tap home the only goal of the game.

Ahead of our previous Premier League campaign back in 2013/14, the Bluebirds faced two top-class European teams on home turf, following a training camp in Switzerland. Defenders Steven Caulker and John Brayford made their City debuts, whilst the Serie A side had goalkeeper Marco Silvestri and stalwart Sergio Pellissier amongst their starting eleven. It was striker Pellissier who had the best chance of the first half, forcing Ben Turner into a goalline block after a sloppy backpass.

The game was decided by a solitary goal, scored by City’s Korean midfielder Kim Bo-Kyung. Minutes after Peter Whittingham had struck the post with a fierce effort, Don Cowie found Craig Noone in space on the left, who forced a smart save from the Chievo stopper. His parry fell straight to Kim, who tapped home from six yards. Alberto Paloschi went closest for I Mussi Volanti (the Flying Donkeys); after his shot was saved by David Marshall, the striker’s follow up struck against the foot of the post and away to safety.

Seven days after the Chievo victory, the Bluebirds completed their pre-season preparations with victory over a Spanish side at CCS. Although there were no new faces for City, the Bilbao side was jam-packed with La Liga stars, including midfielder Ander Herrera, winger Iker Muniain and defender Aymeric Laporte. The Bluebirds took the lead towards the end of the first half, with Peter Whittingham on target. Steven Caulker’s header released Fraizer Campbell, who picked up the ball inside the box and played a square ball back out towards the edge of the area. Whittingham raced onto the ball and lashed a thunderous effort into the bottom corner with that famed left-foot.

The second City goal came just after the break, with Kim Bo-Kung involved. The South Korean picked up the ball in the middle of the park and fed Campbell with a delightful through ball. The striker rounded the keeper with ease and slotted into the bottom corner, earning the Bluebirds some breathing space. Bilbao got themselves back into the game, with a terrific volley from Andoni Iraola, who latched onto Herrera’s lofted pass. Nevertheless, the Bluebirds held on for a victory ahead of their Premier League opener seven days later.

City finished their preparations ahead of the 2014/15 season with a thrilling 3-3 draw against Wolfsburg, who would go on to finish the Bundesliga campaign in second place and lift the DFB-Pokal (German Cup). The German side opened the scoring after four minutes, with Marcel Schäfer on hand to nod home after the ball took an unfortunate deflection off Matthew Connolly. The star of the show for our opponents was undoubtedly Kevin De Bruyne, whose exploits throughout the campaign would earn him a record-breaking move to Manchester City in 2015. The Belgian midfielder doubled the lead after twenty-seven minutes, with an unstoppable long-range effort that flew into the top corner.

However, City’s rival midfield maestro replied with a trademark strike of his own. Having struck the crossbar a few minutes earlier, Peter Whittingham fired a delightful free-kick into the bottom corner to put the Bluebirds back in contention. City drew level just before half-time; tenacious work from Fábio on the left-hand side saw him win the ball and enter the box, laying off for Nicky Maynard to apply a cool finish.

In the second half, Kim Bo-Kyung put the Bluebirds in front, tapping into an empty net after Kenwyne Jones’ header had struck the post. However, veteran Croatian striker Ivica Olić grabbed a late equaliser for the visitors, slotting home at the near post to complete an enthralling fixture.