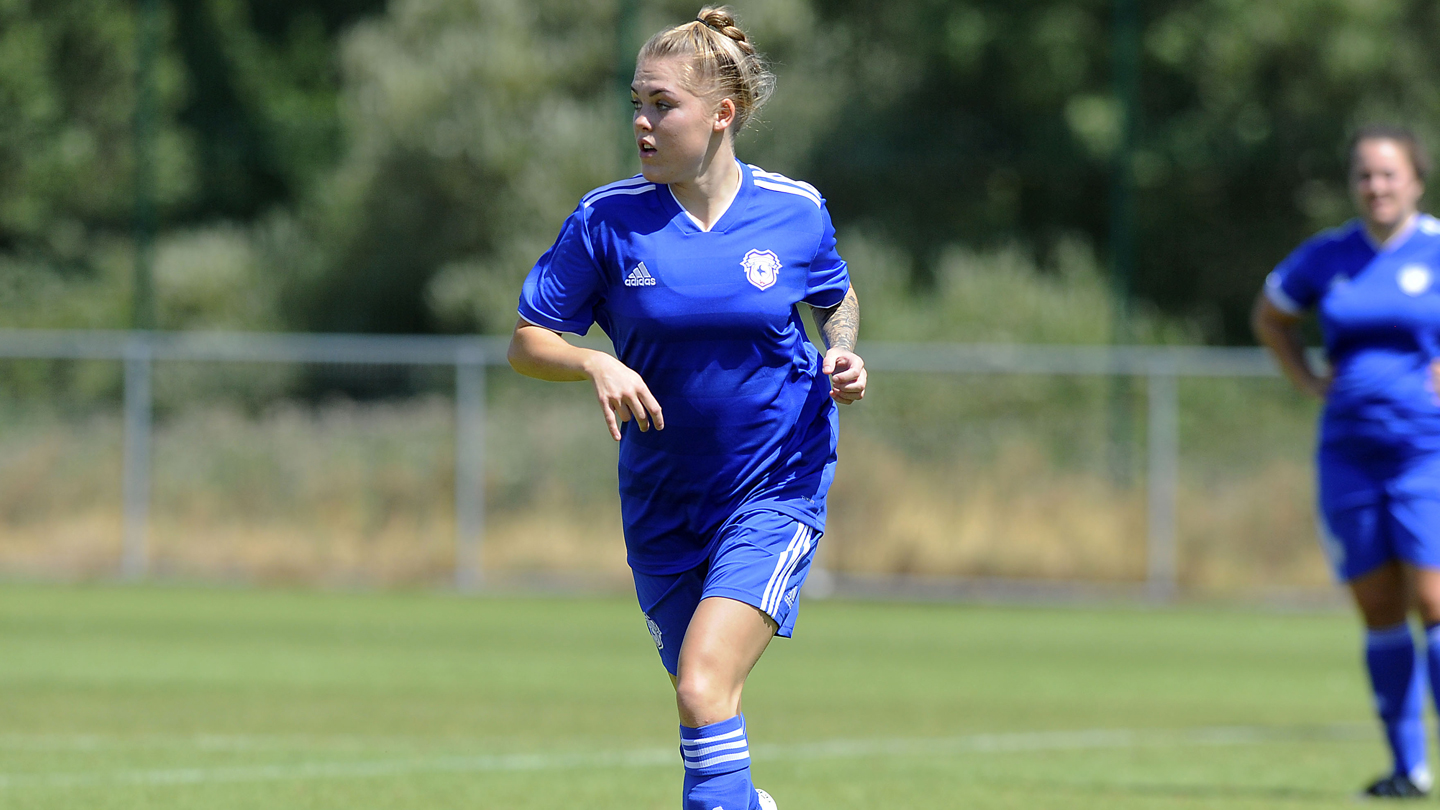 The result meant that City moved up to fourth in the league table, level on points with third-placed Swansea City, two points behind second-placed Abergavenny and six points behind leaders Cardiff Met. The Bluebirds have a game in hand over each of those teams.

The encounter started swiftly and Abergavenny had a goal ruled out two minutes in. Striker Lyndsey Davies went through on Skinner, but she was flagged offside before putting the ball in the net – the Bluebirds’ defensive line working to great effect.

City responded emphatically and opened the scoring six minutes later. Jones lofted the ball upfield and Murphy got on the end of it, speeding away from her marker and entering the right side of the area - before shooting low into the bottom left corner. It was the forward’s seventh goal of the 2018/19 WPWL campaign and tenth of the competitive season.

On the 12th-minute mark, the Pennies were again denied by the offside flag. Lyndsey Davies ran one-on-one with Skinner and the linesman raised his flag just as the danger woman finished. The away side replied by almost doubling their lead, just four minutes later. From a corner the home defence cleared as far as Broadhurst on the edge of the area and the midfielder shot agonisingly over the crossbar.

Broadhurst looked determined to make an impact and she did, after 22 minutes. From the area’s left edge, the 26-year-old hammered an effort towards the bottom right corner and Hastings dived to tip the ball away, prior to Catherine Walsh rushing in to finish and doubling the Bluebirds’ advantage. It was the forward’s seventh goal of the WPWL season and eighth of the competitive campaign.

The 25th-minute marked the hosts’ next opportunity and a chance to get back into the match. The ball arrived at the feet of Sian Bull inside the area and in space, although her effort went wide of the left upright. Then three minutes later, Lyndsey Davies sped down the right flank and her attempted cross was blocked by Siobhan Walsh, who bravely threw her body in the way. It only took two minutes for Kate Jeremiah to go one-on-one with Skinner and the goalkeeper put the pressure on, forcing the midfielder to tap astray of the right post.

Down the other end after 35 minutes, Murphy’s first-time cross from the right wing found Catherine Walsh, who misconnected and the hosts cleared. It was end-to-end football and the Pennies had another opportunity, two minutes after, as Lyndsey Davies found the ball at her feet around the six-yard box and Skinner made herself big before making a super save.

As half-time approached, City came close to a third - with Murphy’s corner being diverted towards goal by a covering defender, although Hastings kept it out. Then the 45th-minute marked Bourne’s ambitious effort from range being gathered by the goalkeeper.

After the interval, the play opposed the first period as chances became a rarity and the ball wasn’t getting near either side’s box. However, the hosts had a brilliant opportunity to pull one back with 22 minutes remaining through Laura Davies. The midfielder stormed into the area and through on goal from the left, before Hannah Daley sped in to make a superb tackle and end the danger.

Despite, the Bluebirds having a two-goal advantage, the encounter was tense as both teams battled for the next goal. After 75 minutes, Danielle Green went down in the area and the referee waved away the penalty appeal. Then three minutes later, Jeremiah blasted astray of goal from just outside the area. With five minutes left, Murphy had a pop from the right edge of the area and Hastings gathered, before Lyndsey Davies diverted wide of the left upright at close range, shortly after. Then into stoppage time, Murphy’s strong volley from the edge of the area was saved and one minute later, Catherine Walsh’s drive was kept out.

Those proved to be the final chances of the match and the Bluebirds took an important three points away to the side second in the WPWL standings. That was the first of back-to-back games against Abergavenny and City will return to Pen-Y-Pound Stadium on Sunday, December 2nd for the WPWL League Cup Quarter-Final.