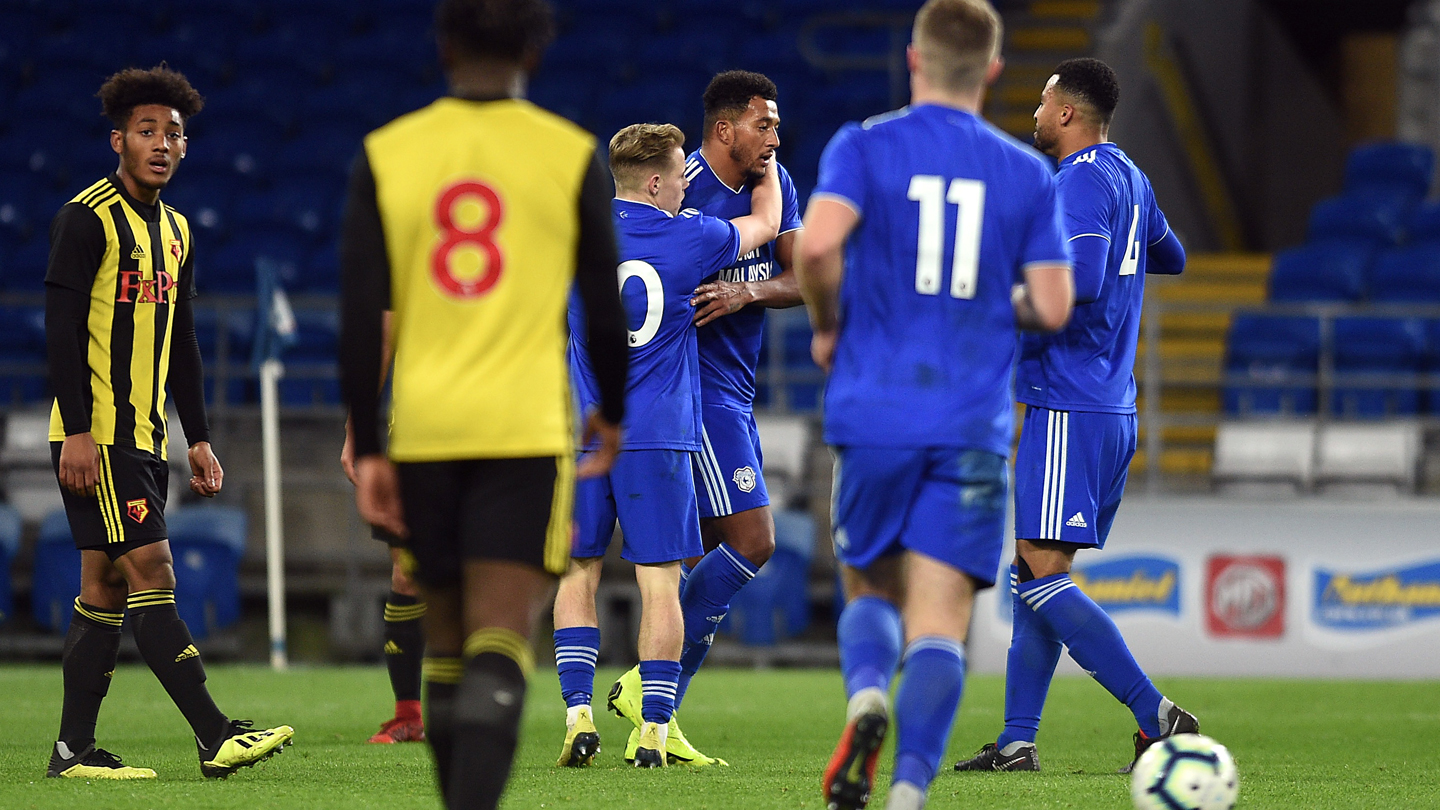 Jarred Harvey’s starting eleven featured five changes from the side that faced Ipswich Town on November 5th, with Brian Murphy, Daniel Martin, Loïc Damour, Nathaniel Mendez-Laing and Gary Madine all being called up to start. Mendez-Laing's appearance in this more experienced U23 side marked the winger’s first match since injuring his posterior cruciate ligament for City’s First Team against Huddersfield in August.

The game opened quickly, with play going from half to half. Watford’s Michael Folivi leading several attacks into the home box. After seven minutes, a cross by Cameron Coxe - who ran down the right wing - was headed clear and Tyrone Duffus’ shot from distance followed, which went high over the bar.

Cardiff City goalkeeper Brian Murphy made a great aerial save from a powerful Folivi shot ten minutes in, sending the ball wide to be cleared by the home side’s defenders following a brief skirmish for control in the box.

On 20 minutes, the Bluebirds showed their dangerous instincts again as James Waite ran into Watford’s box, racing for the ball against goalkeeper Sam Howes. There were calls for a penalty following contact in the area that resulted in Waite falling to the ground, but these were dismissed quickly by the referee.

Jake Evans forced Howes to make his first real save of the match after 25 minutes, shooting low and to the right from inside the box. The ball was subsequently tipped away by Howes,and went out for a corner.

Waite, who was having a fine evening for the Bluebirds, was fouled just outside the box on 29 minutes, giving the home side a free kick in a promising position. The attacking midfielder dusted himself off and took the set piece, curling around the wall successfully, but this effort was then pushed away by Howes. The Welsh youth international had another shot blocked less than a minute later, with Duffus then missing his own shot on the deflection.

The first half ended goalless at Cardiff City Stadium despite the chances from both teams to break the deadlock. The second half began in much the same way as the first, with Cardiff City and Watford each trying to find an opening.

The first real chance of the half came on 57 minutes, as City winger Evans took a shot following attacking play from the home side, sending the ball creeping over the crossbar. Waite’s shot on 63 minutes was the next chance, the ball being sent wide of the goal following more attacking play.

Mendez-Laing was substituted for Jamie Veale at 68 minutes, but not before opening the scoring for the Bluebirds. The newly-returned winger rocketed the ball into the back of the net following a strong attacking build-up from Jarred Harvey’s side, capitalising on a strong low cross from James Waite.

Experienced forward Madine led the line all evening against a dogged Hornets defence, and was finally rewarded for his patience with just seconds left on the clock. The former Bolton Wanderers man met a cross from the left side with a powerful header that flew into the top left corner of the net.

The match ended without a response from Watford, leaving the score at 2-0 to the young Bluebirds.