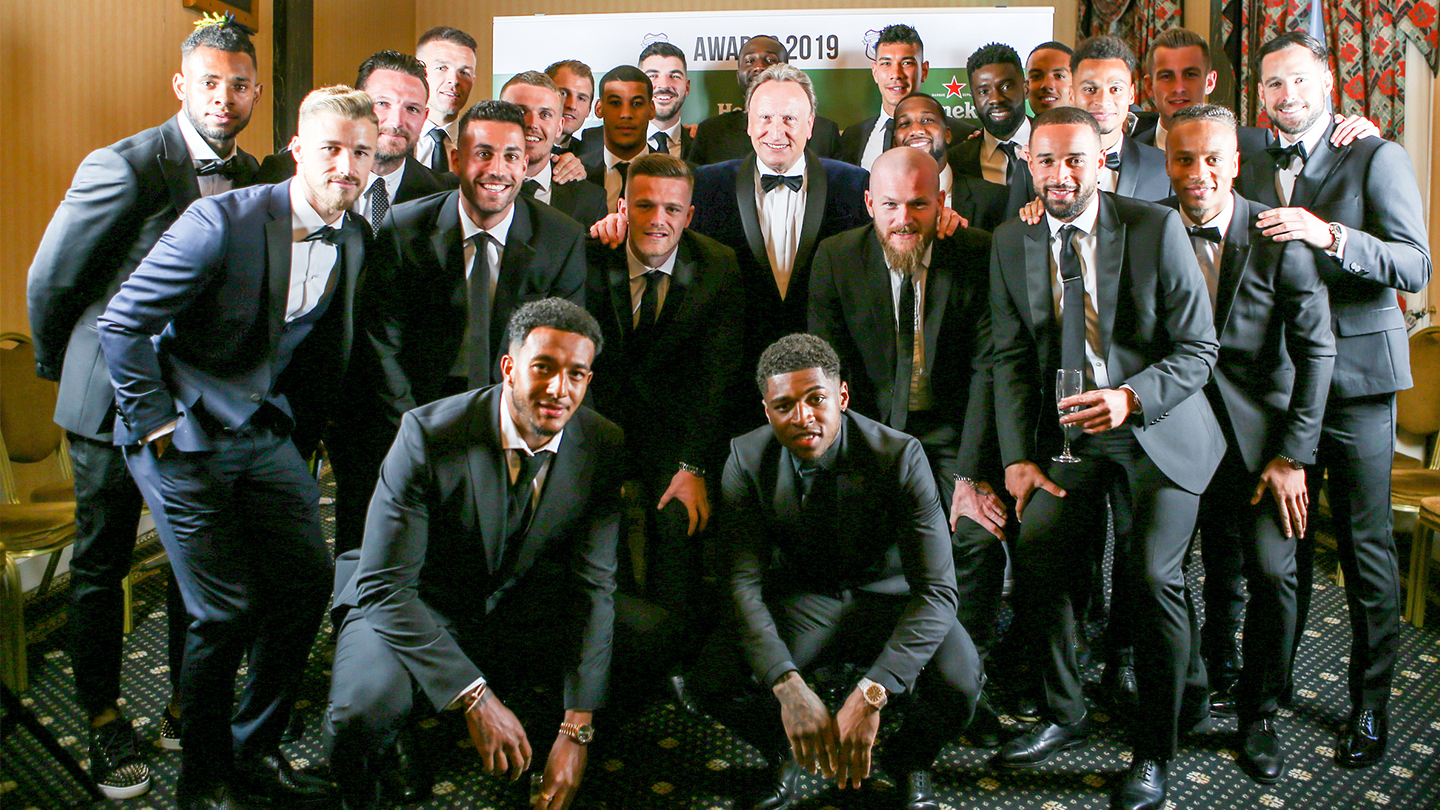 On Sunday May 5th, the Bluebirds held their annual Awards Night at Cardiff City Hall.

The exclusive black-tie event, in association with Heineken, took place in the heart of the city once again, following last year's event at the Mercure Cardiff Holland House Hotel.

Manager Neil Warnock and his first-team squad were in attendance, as Rhydian Bowen-Phillips hosted throughout the night.

Ahead of the presentation of the awards, Cardiff City FC Executive Director & CEO Ken Choo took to the stage and kicked off the evening with an opening speech.

The first winner of the night was Cardiff City Academy's Player of the Season, as 'keeper George Ratcliffe took the award.

On winning the award, George stated: “It feels amazing, especially playing with a team that has so many quality players, so to win Player of the Season is excellent and I couldn’t really ask for much more.”

Our first winner of the evening...

The second award of the night was Cardiff City FC Women's Player of the Season. The award went to defender Hannah Daley.

“It’s amazing and I’m so humbled because I didn’t expect it," began Hannah. "So I’m overwhelmed and really happy.

At the beginning of the season, Hannah transformed from a defensive midfielder to a central defender. She added: “I had to get used to it even though it’s only a few yards difference, but the coaches have been amazing in helping me adjust, so I’m comfortable and happy to be playing there now.”

? @CardiffCityFCW's Player of the Season is... Hannah Daley!

Next up was Cardiff City FC Foundation's Community Participant of the Year, which was given to Jordi Blake.

Jordi thanked his mother when accepting the award, saying: "If there was an award tonight for Mum of the Year then it would have to go to her!"

A touching moment at City Hall as Jordi Blake is named our Community Participant of the Season.

Following the main course at City Hall, it was time for the First Team awards to be presented.

For the second successive year, Callum Paterson was awarded Young Player of the Season!

"Making my debut in the Premier League was a massive achievement," said Paterson. "I've wanted to be able to do it since I was just a boy."

"To have the opportunity and to then score my first goal was even better. I was delighted to be able to do that this season and it'll stay with me for the rest of my days."

? "I think I'm the oldest-looking Young Player of the Season in history!"

Aron Gunnarsson was then presented the award for Outstanding Contribution, following eight years playing for City that will finish at the end of the 2018/19 season.

"I'm thankful for the eight years I've spent at the club," began Gunnarsson. "There have been plenty of ups and downs but I'm proud of what i've achieved with Cardiff City, from the Carling Cup Final and two promotions."

Not a dry eye at City Hall as Gunnar is handed our Outstanding Contribution Award. ?#CityAsOne pic.twitter.com/RpyhEIn2l9

The Player's Player of the Season Award was presented next. The award went to Víctor Camarasa.

"I'm very happy," began the midfielder. "Becuase it was my teammates who voted for me. Ever since I arrived both the dressing room and the coaching staff have been incredibly kind, they've treated me really well."

Camarasa earned his second award of the night immediately afterwards, picking up Goal of the Season for his wonderful strike against Leicester City in December.

It's a brace of awards for @vicama8!

Following a heartfelt speech of thanks from the Gaffer, the final award of the evening was presented. Cardiff City's Player of the Season, voted by you the fans, was Neil Etheridge.

On winning the award, Neil said: “It’s amazing and a fantastic achievement for myself personally, so thank you to all the supporters who voted for me.

“I didn’t expect this two years ago when I signed for the club, but I’m extremely proud of myself and everyone who supported me.”

Our final award of the evening at City Hall...#CardiffCity's Player of the Season is @Neil38Etheridge!#CityAsOne pic.twitter.com/Wk3ARAxzX1