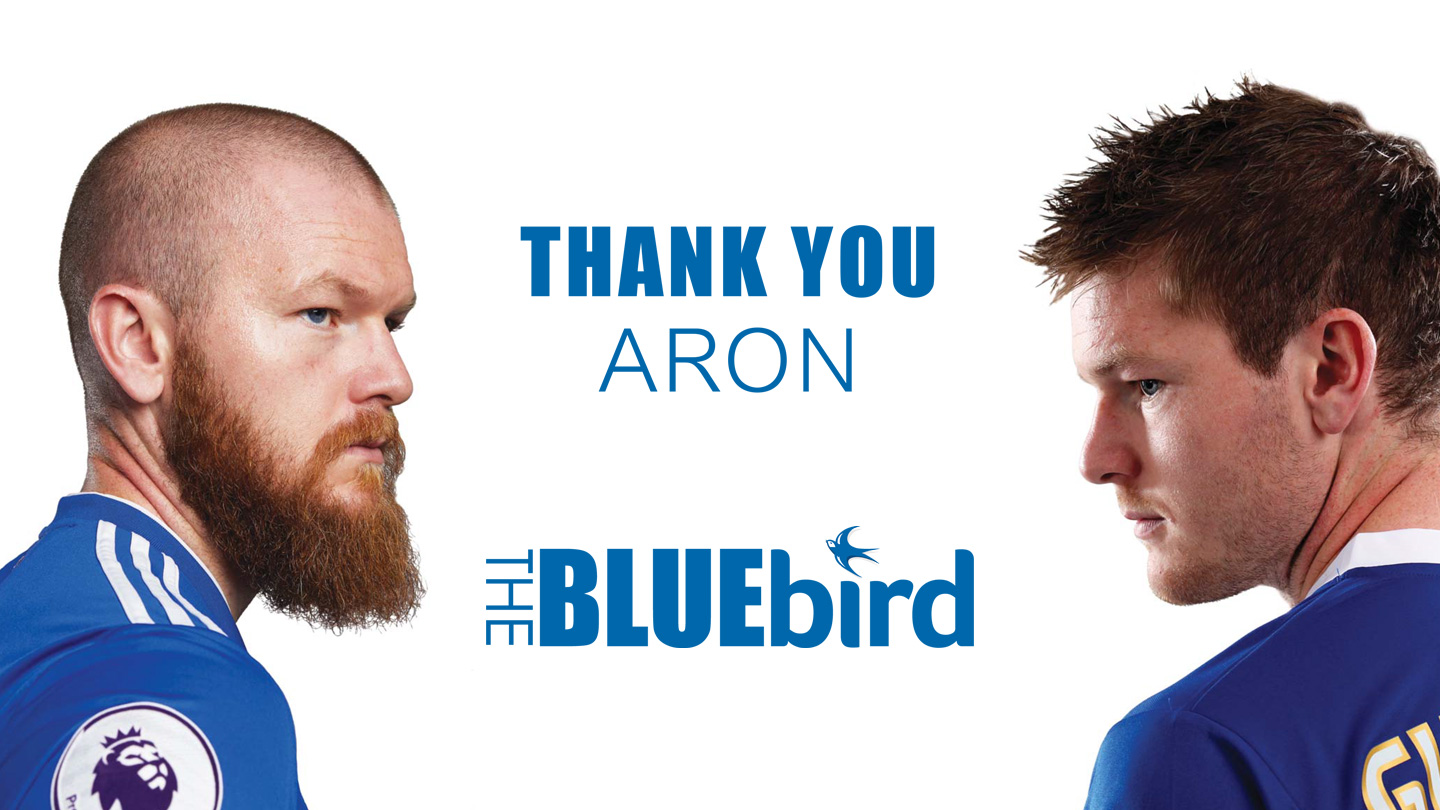 As we mark the ﬁnal home game of his eight years of service to Cardiﬀ City Football Club, today we pay tribute to Aron Gunnarsson. A true Club icon, Gunnar’s near decade stint with the Bluebirds will see his name remembered by supporters among the City greats.

Our longest serving current player, he has pulled on the shirt a total of 284 times to date. While his leadership and battling in the engine room has driven City forward throughout that time, he has also tallied up 25 goals – more than any other current Bluebird.

His legacy in the Welsh capital includes two promotions to the top ﬂight and a Cup Final. On an individual level, he netted our ﬁrst ever Premier League goal and, more recently, hugely important carbon-copy strikes against Nottingham Forest and Wolves, either side of promotion.

We have proudly watched him ﬂy the ﬂag on the international stage too, taking Iceland to the Quarter-Finals of their ﬁrst ever European Championships, along with the following World Cup. We sat down for an exclusive interview with Gunnar in the build-up to this afternoon’s match, as we reﬂected on his career in the Welsh capital ahead of the ﬁnal two matches of the Premier League season.

THE BLUEBIRD: Thanks for joining us ahead of your ﬁnal home game in a City shirt, Gunnar. Is today set to be an emotional one for you?

ARON: It will probably hit me after the game, knowing that it will be my last game in front of the home fans who I’ve played in front of for eight years. We’ve been through a lot, me and the fans. We’ve had ups and downs, good times, happy times, and tough times, as you get in football. We’ve had every bit of emotion together, and that will probably hit me a bit harder after the game. Game-mode for me is so focused that I don’t let things like that aﬀect me – not until the ﬁnal whistle blows, anyway.

THE BLUEBIRD: As those at CCS pay tribute to your Bluebirds career, have your family and loved ones come over to share today’s occasion with you too?

ARON: I’ve got a lot of people coming. My mum, dad, wife, her mum and plenty of people who want to experience my last game here. My mum and dad were here for my ﬁrst ever match, so I couldn’t imagine anything better than having them here for my last one as well.

THE BLUEBIRD: As you said, you’ve been through a lot alongside our supporters. How strong is your bond with them?

ARON: When you go through both tough times and good times, the bond usually gets stronger. We’ve had to ﬁght through at times, but we’ve done it all together. The support we’ve had this season has been unbelievable. The last time we were in the Premier League, there were mixed emotions; whereas this year, we’ve had our setbacks, but we’ve always bounced back. It’s another big game today that might deﬁne our season. Hopefully, we can get a win and give ourselves a chance for the last game.

THE BLUEBIRD: Our fans have been sending in their favourite pictures with you from over the years (p40-41). Have those brought back a few memories?

ARON: I’ve been following it and seen a lot of the pictures, especially on Twitter. It really does bring back a lot of memories, good and bad – there are some bad hairstyles and rough beards in those pictures [laughs]! But seriously, it’s good to be reminded of everything that you’ve been through with the Club and these fans.

THE BLUEBIRD: One of those pictures was sent in by a certain Kevin McNaughton! Have some of your teammates here become friends for life?

ARON: Yeah, he posted a picture of the day before my wedding. I was out with the boys: Huds, Pilks, Nooney, Marshy, Whitts. There were a few good old faces there. Like I said, I’ve been through a lot here and have got to know some talented players. I’ve got to play with a lot of characters who I will always remember and made mates that I’ll still speak to, even when I’ve retired. It’s been eight good years that I’ve thoroughly enjoyed. I’ve been lucky to be involved in two promotions and a Cup Final. Luckily, I’ve spent the majority of my career here, and I’ve enjoyed every minute of it.

THE BLUEBIRD: You have 284 appearances to your name since joining back in the summer of 2011. Does that still feel like yesterday?

ARON: It does – I remember when I ﬁrst came in. I was at the Vale, and we only had about nine players because the Club was going through a lot of changes. We’re were signing players in abundance and getting bodies in. It was a weird ﬁrst few weeks, but I knew Cardiﬀ because I had played against them a few times before with Coventry. They were always on the brink of getting promoted. I could have gone straight up to the Prem at the time, as I had an oﬀer from West Bromwich. But I felt like Cardiﬀ was the right step for me to take, because I wanted to grow as a player in the Championship and take that Club – Cardiﬀ City – to the Premier League.

Luckily that happened the year after I came. It was an unbelievable achievement from the boys in that squad. There are lots of memories from the eight years, but I’m happy with the achievements overall. Taking the Club, deservingly, into the Premier League this time around and playing at the top level with Cardiﬀ, the Club I’ve been at for eight years, has been a dream.

THE BLUEBIRD: Do you see those two promotions, and of course the Cup Final in 2012, as part of the legacy you’ll be leaving behind in the Welsh capital?

ARON: My aim was to come here and have success, to get to the Premier League with Cardiﬀ, and hopefully stay there. It’s still possible this time, but it’s going to be really hard, especially with two diﬃcult games coming up and Brighton picking up some points. My aim is to leave the Club in the Premier League, but if I don’t manage to do that, I’ll still look back and be proud of the achievements we’ve had together here at Cardiﬀ.

THE BLUEBIRD: Having made Cardiﬀ your home and started a family here, will the city always have a special place in your heart?

ARON: I’ve been here for eight years and both of my sons were born here. I’ll be a Bluebird forever; I know that for sure. I’ll be looking out for the results for years to come, and the ﬁrst will always be Cardiﬀ. With the boys growing up here, they’re going to know about it too. They’re going to play for Iceland, not for Wales, I can tell you that [laughs]. The ﬁrst thing I did was get them Icelandic passports, being a proud Icelander myself! I know how proud Welsh people are of being from here too and I get the same feeling when I represent my country. It’s that small-country mentality, that you need to be proud of where you’re from.

THE BLUEBIRD: Of course, your time here has coincided with unprecedented success on the international stage. Have the two gone hand in hand?

ARON: Deﬁnitely. Cardiﬀ has played a big part in my success with the national team actually – giving me conﬁdence going forward and teaching me a lot about the hard work needed to get results. I’ve taken all of that into the national side, so I’ve got Cardiﬀ to thank for a lot of the success we’ve had on the international stage as well. I don’t think we would have had that success without Cardiﬀ. The Gaﬀer has got that similar mentality, knowing that hard work and togetherness is going to take you places. That’s exactly what we’ve been about this season, and last season as well, so long may that continue.

THE BLUEBIRD: As for today’s match, Gunnar, are the boys simply preparing to ﬁght for everything in the two remaining games?

ARON: That’s it. We’re in this position together. Everyone has written us oﬀ again, but we do keep bouncing back because of the character of this group and the togetherness that we’ve got. It’s another tough game as Palace have been really good and eﬀective away from home this season. We know another good performance might give us a chance for the last game, but we need to have a top game to beat Palace, especially when you look at their form this season.

THE BLUEBIRD: And here at Cardiﬀ City Stadium, this group of players will continue to give everything for the shirt and the home faithful, won’t they?

ARON: Deﬁnitely, we need that – we have to stand together in these last couple of games. I know for a fact that the fans will be there for us today. We need to turn up and work hard to get something out of today’s game. Our backs are up against the wall. If both us and Brighton get results, then we can hold our hands up and say we couldn’t do anything more. But, it’s the business end of the season, which is when you need characters to stand up and be counted – that’s what we have to do this afternoon.

THE BLUEBIRD: Once the season ends and you look back on your career here in South Wales, will it be something that ﬁlls you with pride?

ARON: Of course. I will always be fond of my time here with Cardiﬀ. I came here as a young boy of 22 years of age, with the ambition to take the Club further. I knew it was going to be tough, but we did manage to do it. We got to the Cup Final and the PlayOﬀs in my ﬁrst year, which was tough, but were crowned champions the following year, and have had further success to follow. I’ve seen a lot of changes and a lot of players come and go, which is part of football. My boys were born here, I’ve got a special bond with this Club that I will treasure forever and, looking back on my time here, I wouldn’t change it for the world.

THE BLUEBIRD: Your tally of 25 goals also makes you our highest-scoring current player. Which of those do you look back on most fondly?

ARON: I think everyone will talk about the Man City goal, being our ﬁrst in the Premier League for Cardiﬀ. Looking back at it, I think my most important was against Nottingham Forest last season though. I’d just come back from injury and wasn’t feeling my best. I came back into the team and we started losing games! It was one of those things, and I was thinking: “What more do I need to do?” When that goal went in to help us push forward and give us that cushion we needed, it was really special for me. The emotion came out of me straight away – I actually got angry after scoring the goal, which doesn’t usually happen! I’m probably most proud of that goal because of how I wanted to see the Club going forward and having success. I needed that, and so did we.