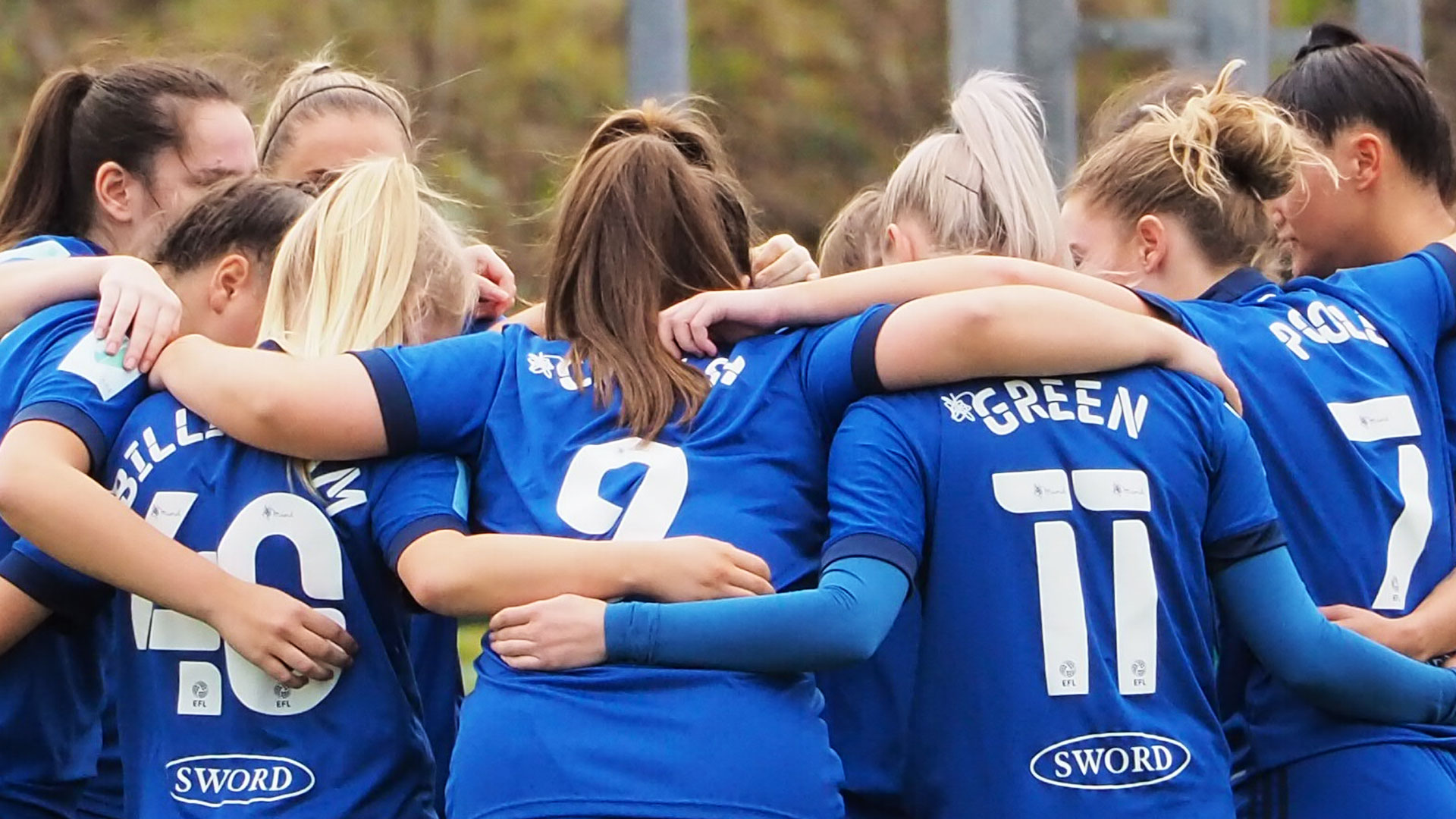 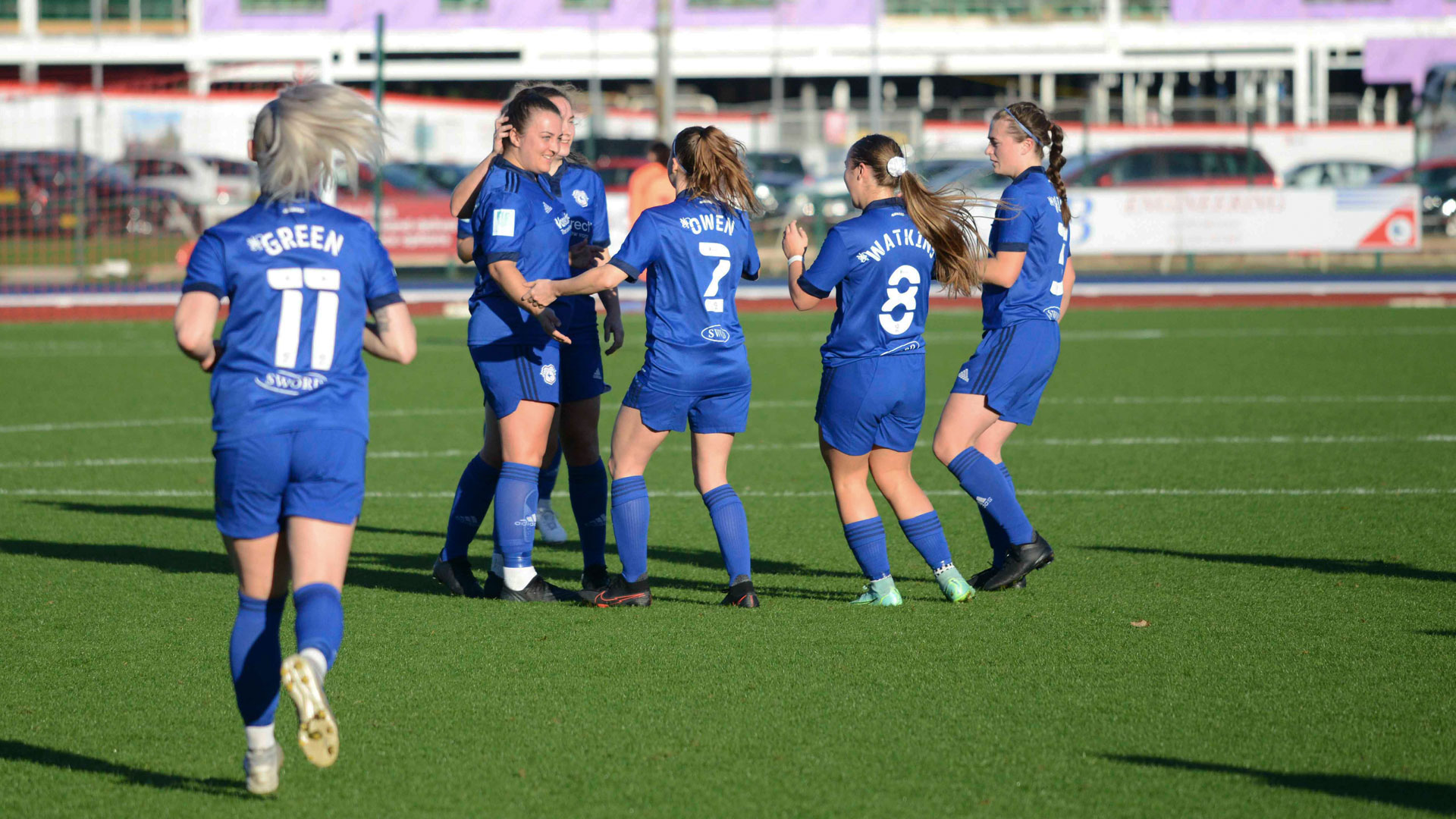 The Bluebirds finished Phase One of the Adran Premier campaign in third position, with it all to play for in the league’s second instalment.

City will be competing in Phase Two with Swansea City, Cardiff Metropolitan University and Aberystwyth Town, as well as battling for both the Adran Trophy and FAW Premier Cup.

As we reach the halfway stage of the campaign, we review the season so far and look ahead to the coming months with manager Iain Darbyshire and integral centre-back Hannah Daley.

With the side averaging a remarkable 3.2 goals per game in Phase One, Darbyshire expressed he has been pleased with the campaign so far.

“I think it’s been a positive season. We’ve improved in the way we play, both on and off the ball. As a whole club, we’ve really improved.

“The younger players have developed really nicely and the more experienced players and buying into what we’re looking to do. As a group, we’re looking really positive ahead of Phase Two.”

In the summer, Darbyshire looked to add quality to the dressing room and did so in the form of new signings Zara Mujica, Emily Bayliss, Megan Saunders, Seren Watkins and Amy Williams.

The Bluebirds boss has since added Wales U19’s defender Hollie Smith to the ranks, who has made an impression in her opening displays.

Commenting on the effect of the new recruits, Darbyshire said: “They’ve all taken on board what I wanted from them, they’re still learning.

“We’re still a young group. I think we’ve still got a long way to go to get to where we want to be, but we’re growing, we’re performing and that’s what it’s all about.

“Our new signings have added a lot to the squad, they’ll be looking to push us forward going into the second part of the season.”

One of the huge positives for City this season has been the morale amongst the squad, shown in a number of fine performances this campaign.

Centre-back Daley feels that the relationship between the squad is having a huge effect on the field.

“It’s always a benefit when the team morale is high. It definitely makes a big difference when you step onto the pitch.

“It means that everyone wants to work hard for each other, which is so important, so it’s been really positive for us as a group so far this season.”

With the recent introduction of the U19 and U16 sides to the women’s programme at the club, Darbyshire has given first-team opportunities to young, talented Bluebirds so far this campaign.

The likes of Michaela Major, Eliza Collie, Charley Hocking, Indie Jay Morgan, Mikayla Cook and Lily Billingham have all featured, with the latter in particular impressing.

Darbyshire expressed that the prospects in the squad have stepped up and played a huge part this season.

“It’s fantastic seeing the young players come through. When we added the U19s and the U16s squads, the aim was to bring these young players through and we’ve been quite fortunate to have a lot of talent.

“We’re a young squad, thankfully we have some experienced players on top of that which helps, but the young players have stepped up because we’ve needed them.

“They’ve played a lot of minutes between them, the girls that are U18 and have performed really well. Lily (Billingham), Phoebie (Poole) and Seren (Watkins), to name a few, have been fantastic, so that’s something we’re happy with and looking to push further now moving forward.”

The Bluebirds will return to action next week as we travel to Pwllheli in our opening fixture in the Adran Trophy.

With an FAW Premier Cup clash with Abergavenny also a key date in the calendar, City will be looking to compete for silverware in the second part of the season.

Daley expressed that finishing the season with success would mean a great deal to the squad.

“It would be great for us to win some silverware this season. A lot of us, the more experienced players, know what it’s like to win silverware and how amazing the feeling is.

“It would be brilliant for the younger players to get that experience as well. For us as a Club, it would show how much we’ve improved.”

In the Adran Premier table, the Bluebirds are currently trailing second-placed Cardiff Metropolitan University by three points, with the postponed clash at Cyncoed Campus rescheduled in the coming weeks.

After a positive start to the campaign, Darbyshire outlined the targets for Phase Two.

“We’re targeting a top two finish at the end of the year and we want to see how far we can go.

“We have to be confident, that’s what it takes to play for Cardiff City. You have to want to improve and be better.

“We’ve had a close result against Swansea, had games against Met and Swansea where they were better than us on the day and that’s what we need to correct.

“We’ve beaten all the other teams around us twice and that was one of our goals at the start of the season, make sure we were one of the dominating teams at the top of the table.

“Now it’s just about improving on the bigger games, make sure we get the mentality right, perform well on the day and step up."

Ahead of a competitive Phase Two in store, Daley added: “We’ve learned a lot in Phase One, especially from the games against the top two.

“They’re both strong teams with quality, but we believe in our own strengths. Those are the kind of games in Phase Two that we’ll have to go into confident in our ability. We’re really looking forward to facing them."

Our 2021/22 Shirt Sponsors are Vans Direct. We'd like to thank Vans Direct for their support this season. For more information about the company, visit: www.vansdirect.co.uk