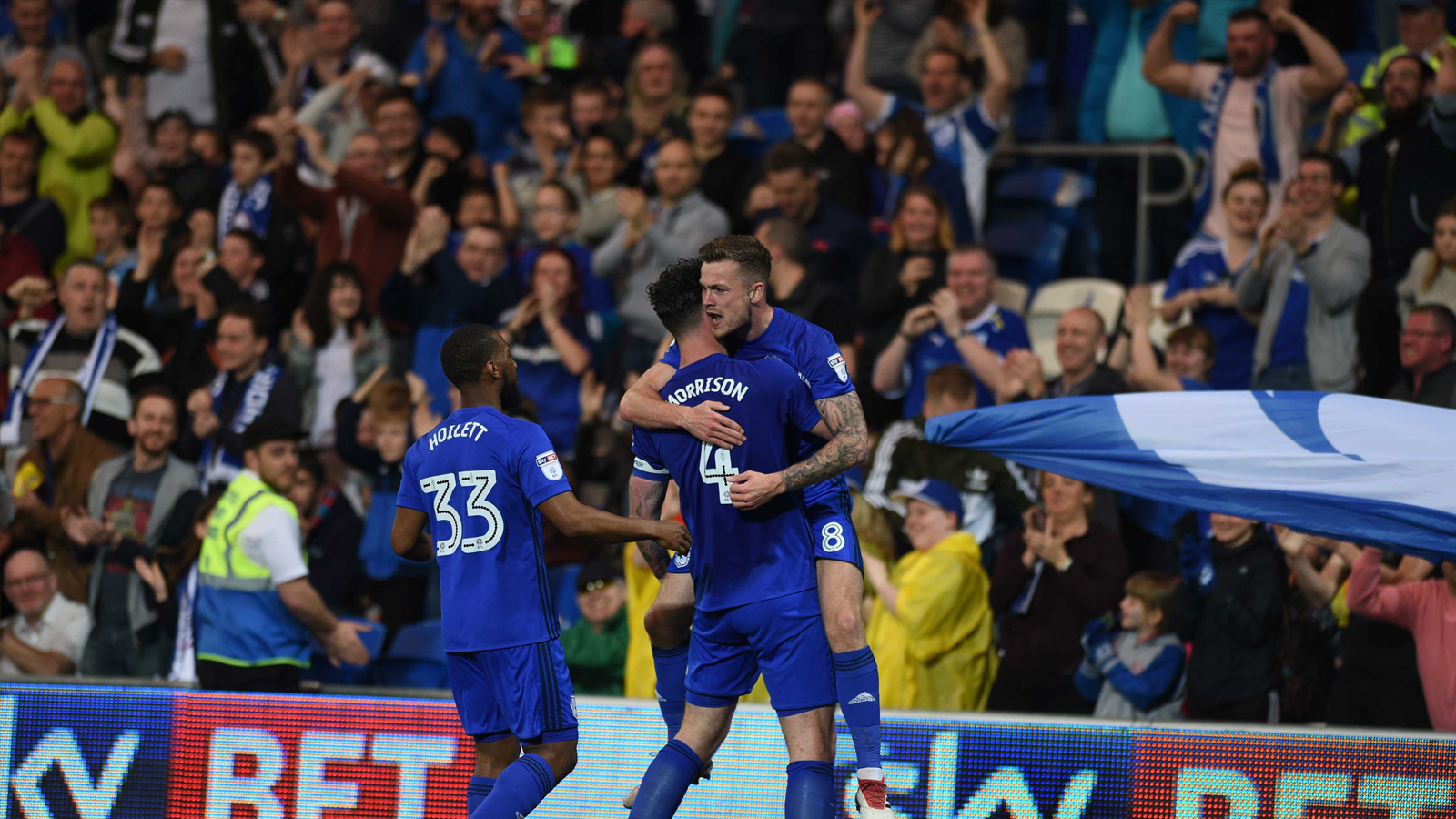 Ahead of Saturday’s match against Nottingham Forest at the City Ground, we take a look back at some notable recent meetings between the two sides… 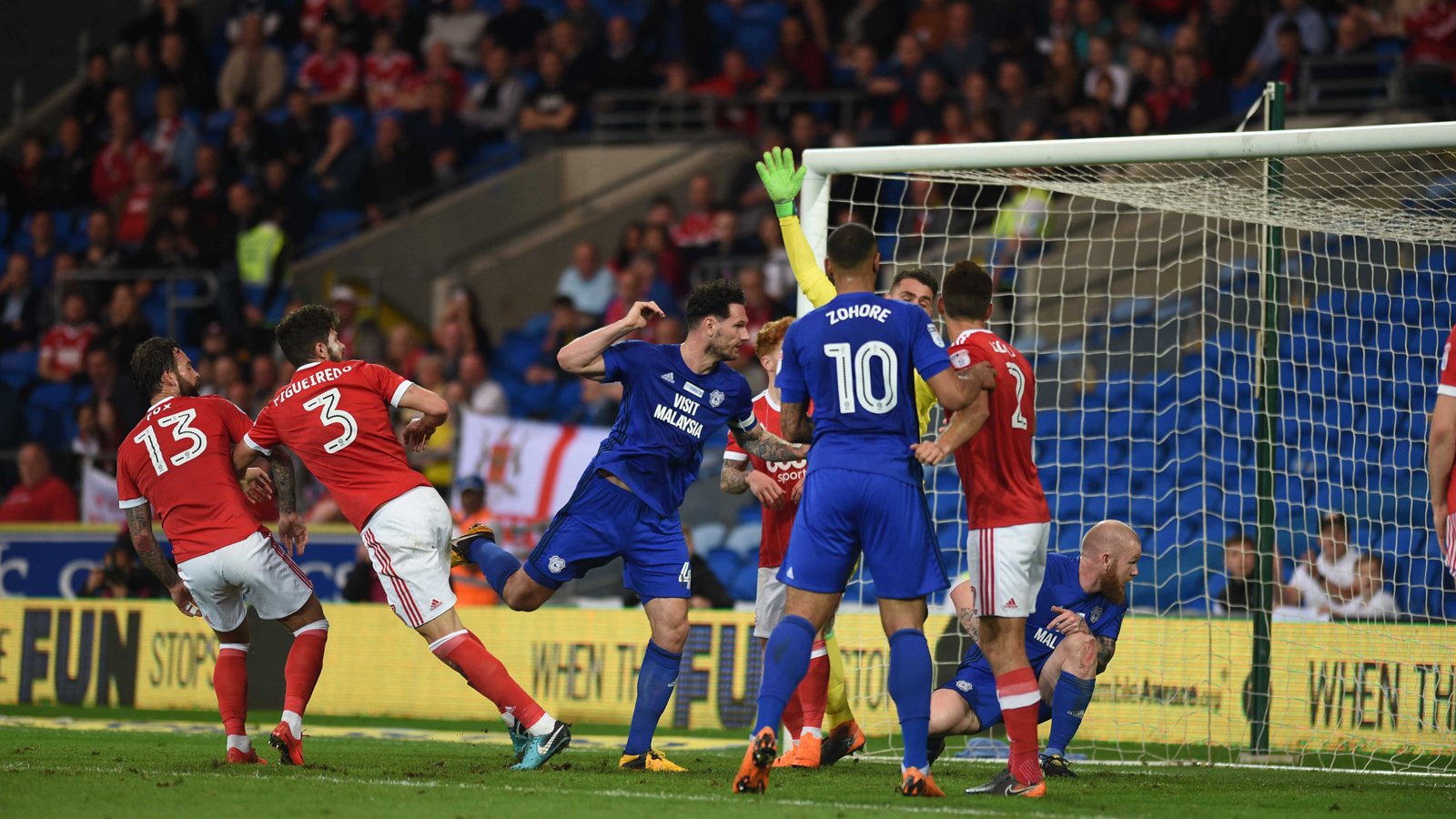 City’s last meeting against Forest took place at CCS on April 21st 2018. With the 2017/18 season drawing to a close and the Bluebirds 2nd on the league table, the pressure was on for the hosts to continue their momentum following their 2-0 away victory over Norwich City in the week prior.

City skipper Sean Morrison opened the scoring with less than 25 minutes played as he headed powerfully into the back of the net from Joe Ralls’ corner kick.

The Bluebirds looked likely to double their lead on several occasions afterwards, with Morrison once again getting a head on the ball from a cross, though it went just wide of the left post as the first half drew to a close.

Ken Zohore came close in the opening moments following the interval, striking past ‘keeper Stefanos Kapino but being cruelled denied by the post and cleared by Danny Fox. 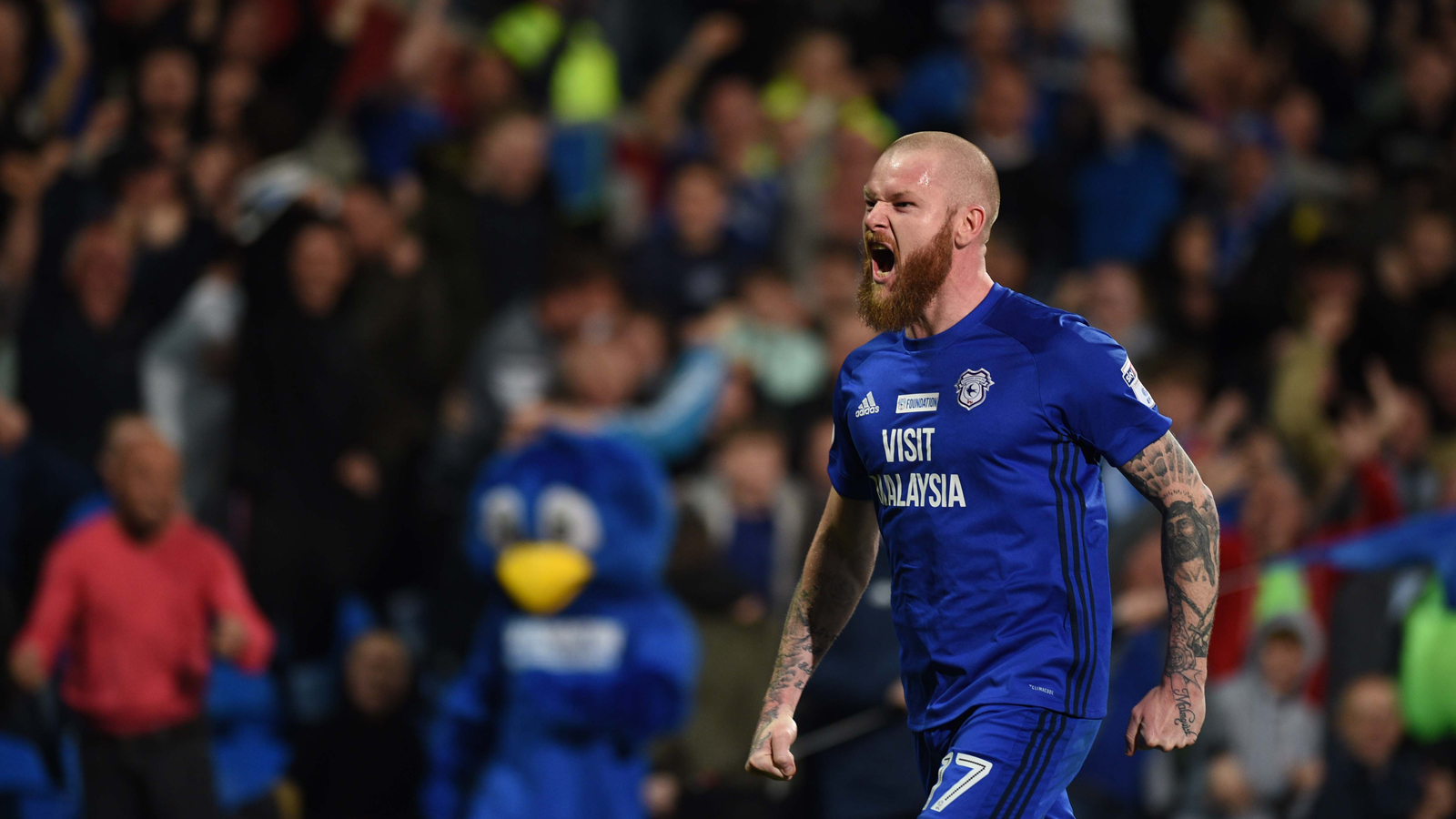 Liam Bridcutt equalised for the visitors shortly afterwards, beating Neil Etheridge to the ball inside City’s area and tapping over the ‘keeper.

However, undeterred by the goal and keeping their composure, with 15 minutes remaining the Bluebirds once again took the lead. Junior Hoilett crossed into Forest’s area from a free-kick, with Bamba heading down towards the waiting Aron Gunnarsson.

The Icelandic midfielder rose at the edge of the six-yard box to acrobatically strike the ball towards goal, beating Kapino before rushing towards the home crowds to celebrate. 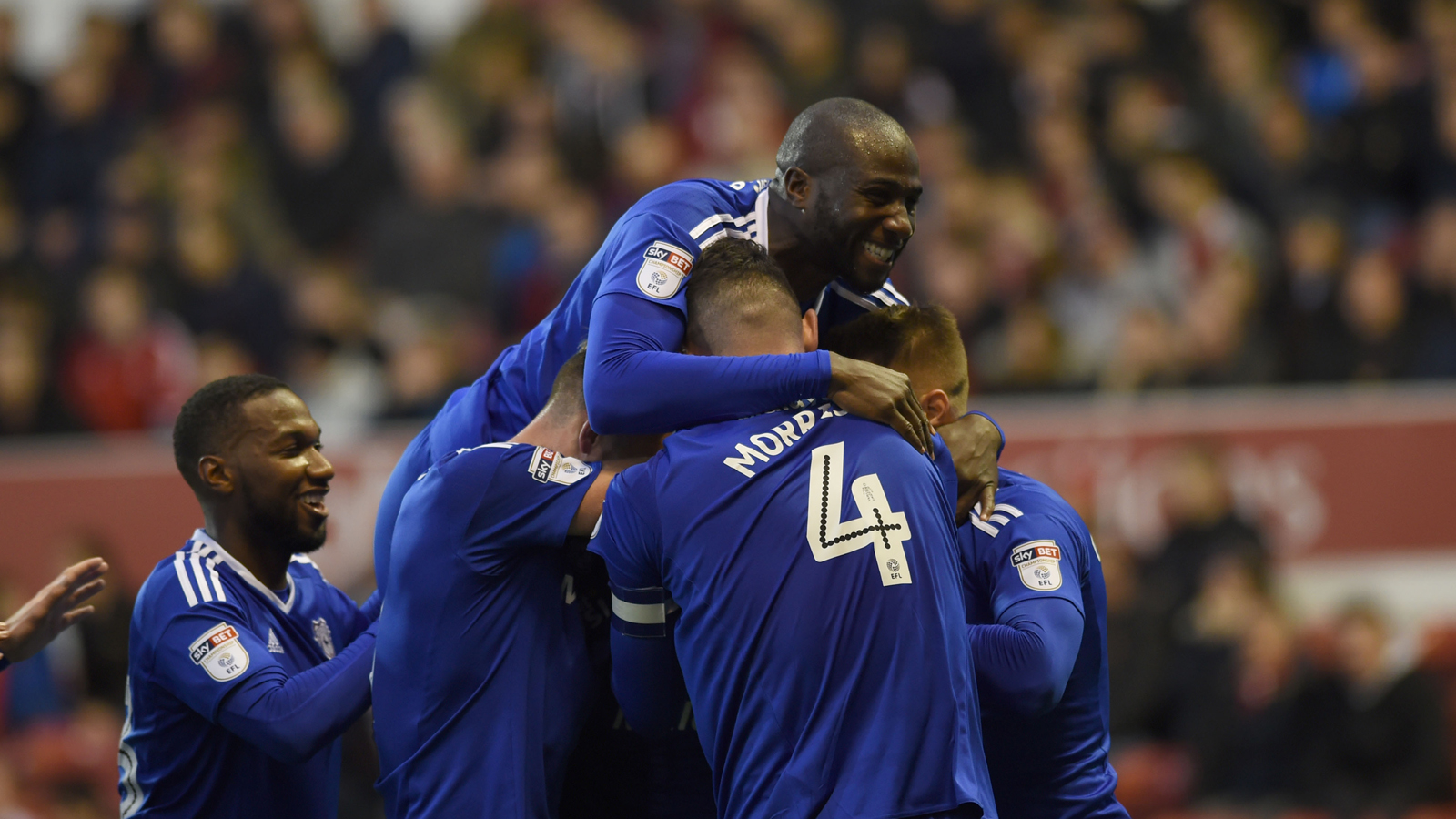 One notable meeting between City and Saturday’s opponents at the City Ground took place in October 2016 as both sides were settling in to the 2016/17 Sky Bet Championship season.

Once more it was Aron Gunnarsson who found the back of the net against the East Midlands side, breaking the deadlock before the half hour mark as Peter Whittingham’s corner-kick found the head of the midfielder inside the area.

Joe Ralls found a goal for himself five minutes from the interval, as Craig Noone’s low pas into the area was deflected high and into the path of the midfielder. In space and with ‘keeper Vladimir Stojković caught out of position, Ralls quickly headed towards the far post, doubling City’s lead. 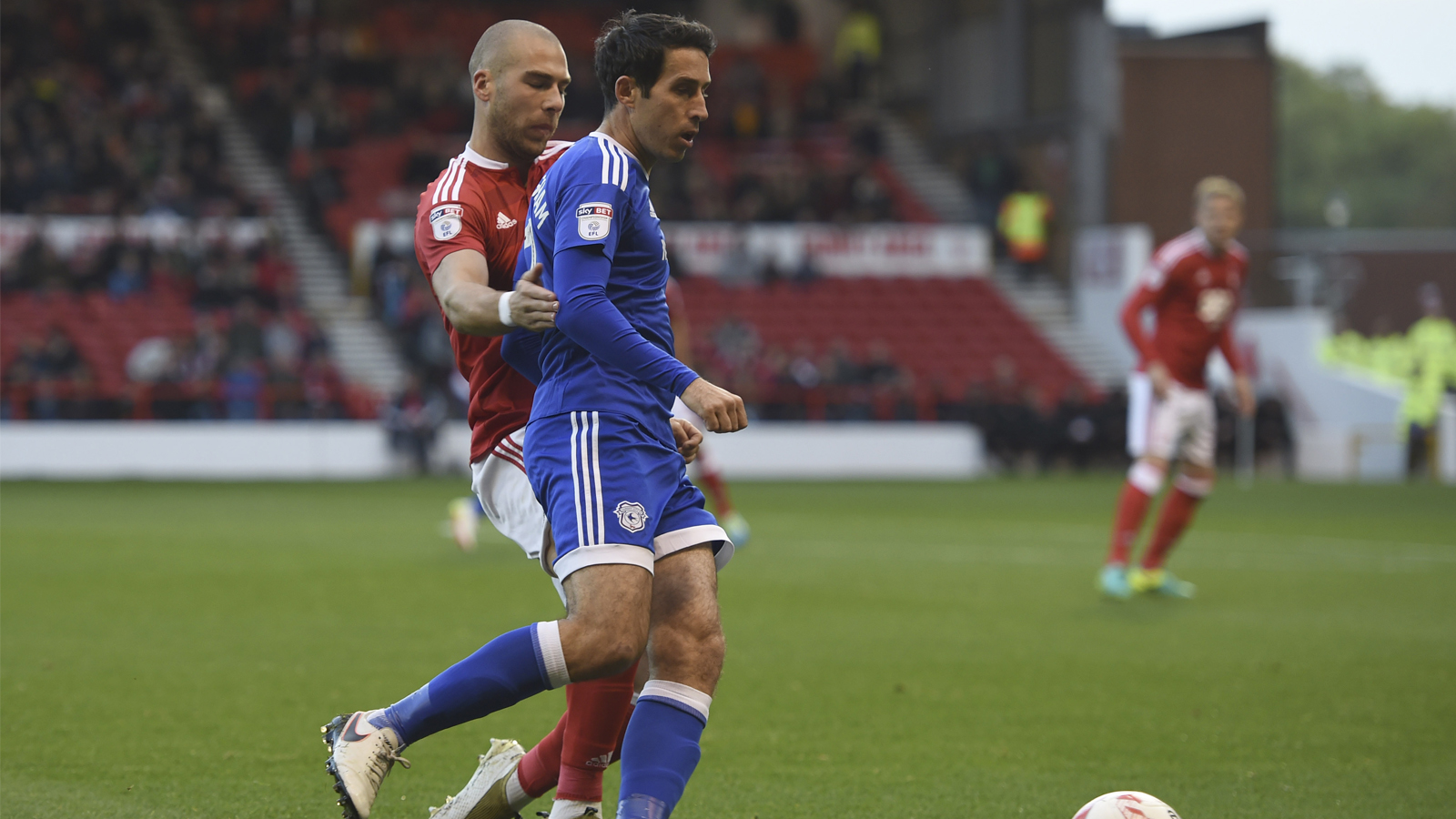 Not content with a two-goal advantage, the travelling Bluebirds continued to press, and the second half was not without some dramatic instances.

Anthony Pilkington was pulled back and fouled by Thomas Lam with nearly an hour on the clock, with the striker having dispossessed the defender deep in the hosts’ half.

The foul proved costly for Lam, who was quickly given his marching orders by the referee, reducing Forest to ten men.

Pilkington came close yet again shortly afterwards, as Whittingham set a wonderful ball down the middle of the park to play the forward through on goal. Beating the ‘keeper and striking towards goal, midfielder Chris Cohen did well to keep the effort at bay, getting a foot to the otherwise goal-bound ball.

In the 91st minute the hosts got a goal back for themselves as Forest won a penalty kick. Gunnarsson was deemed to have fouled Henri Lansbury, who stepped up to take the kick from the spot himself.

Sending Ben Amos the wrong way and reducing the deficit, another goal for the hosts was too much to ask for, however, as the final whistle blew without any further chances for either side.