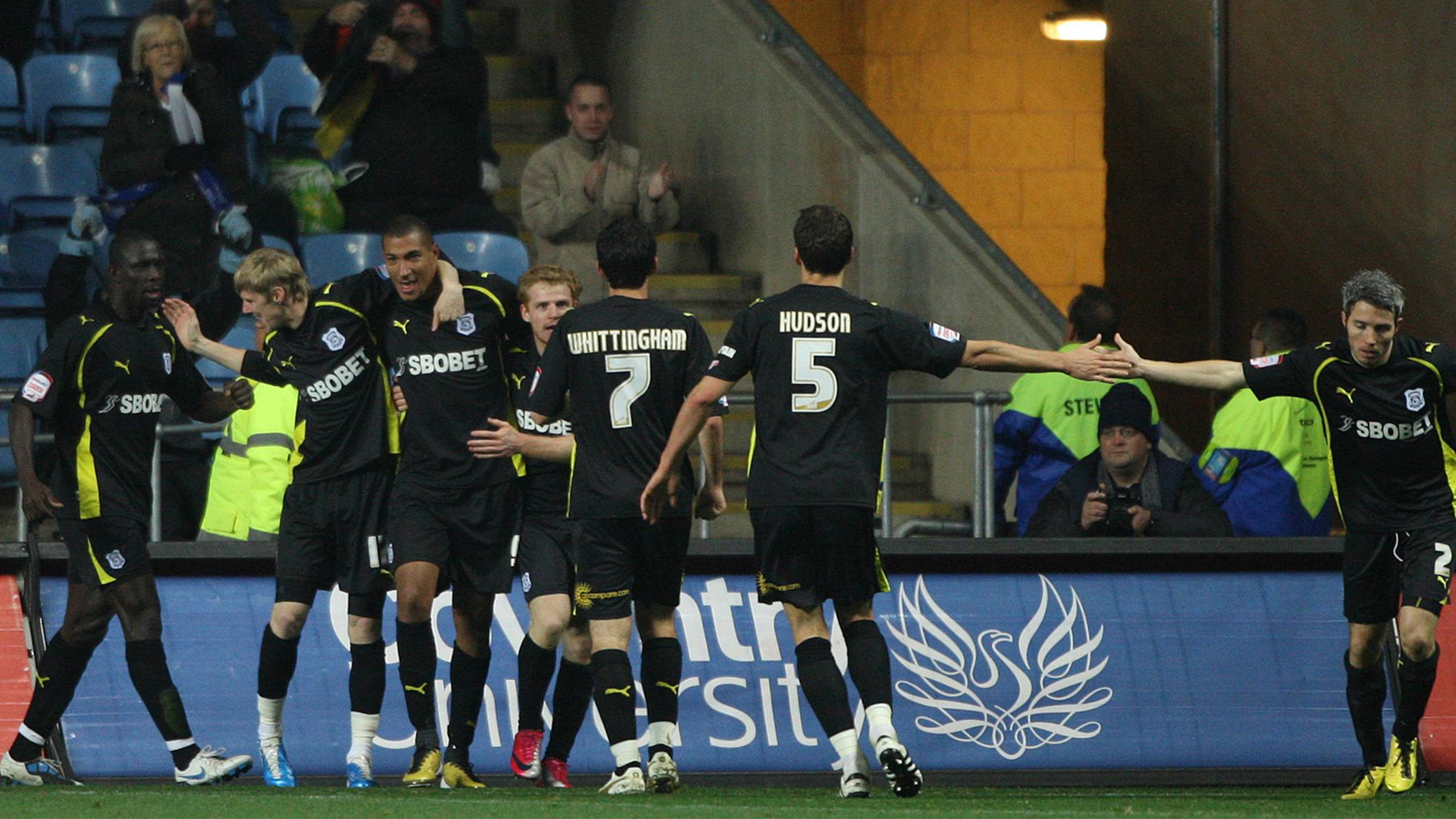 With Wednesday night's fixture fast approaching, we recall a dramatic encounter with the Sky Blues...

The Bluebirds' meeting with the Sky Blues on October 18th 2010 came as both sides looked for a battle at the top end of the Championship table.

City had lost only two of their opening 11 fixtures in the campaign up to that point, and were unbeaten in four matches. Meanwhile, the Sky Bues were knocking on the door of the Play-Off spots, and were themselves unbeaten in three after a recent victory against Ipswich Town.

Following kick-off at the RICOH Arena, the Bluebirds wasted no time in taking the lead, netting in only the fourth minute of play.

With Michael Chopra fouled inside the area, Peter Whittingham stepped up to take the resulting kick from the spot. The assured midfielder struck with his left foot to put the visitors in the lead, racking up his third goal of the season with a brace against Bristol City coming only three days earlier.

The early lead would not last until the interval, however, as Gary McSheffery struck into the Bluebirds' net on the stroke of half-time in response to further pressure from the visitors.

Though in the driving seat for a majority of the fixture, the hosts saw a few chances denied by City 'keeper Tom Heaton, including one great stop from a shot by eventual Bluebird Aron Gunnarsson, who eventually moved to South Wales at the end of the campaign.

At the end of a frustrating second half for City, it would fall to Chris Burke to set up the eventual winner in the 86th minute. Utilising his pace with the ball at his feet, the Scotsman darted down the left wing and deep into the hosts' final third.

Crossing low and into the area, striker Jay Bothroyd recognised the pass and quickly rushed to redirect the ball goalward from his left foot. Unleashing the effort on his first touch, the ball flew into the back of the net, securing all three points returned with the visitors to South Wales.

The result helped to secure Cardiff City's early chase at second place on the league table, who at that point trailed Queens Park Rangers by only two points.

The Bluebirds would continue their unbeaten streak in the weeks that followed with victories against both Leeds United and Norwich City, with Bothroyd picking up a further three goals from the two matches for his tally.

Jay Bothroyd's winner against the Sky Blues came midway through a terrific run of form for the Islington-born forward.

Having scored 12 goals in his first campaign for City, followed by a further 11 in his second, the 2010/11 campaign began with a bang for Bothroyd, who netted seven times from his first ten appearances that season.

The winner against Coventry City, his ninth goal of the campaign, saw the forward display his goalscoring prowess to the club where he had began his senior career.

Beginning with a youth career spent playing for Arsenal, Bothroyd was bought by the Sky Blues in 2000, at the age of 18 years old.

As a young man he made his professional league debut against Manchester United in the Premier League, appearing as a substitute in a home defeat to the eventual league winners.

Though the club was relegated at the end of his inaugural season, Jay remained with the club for two more seasons, plying his trade in the Championship (then called the First Division), scoring 14 goals across two campaigns in the second tier.

A move abroad was soon to follow for Bothroyd, with a season spent with Serie A club Perugia, before he returned to play Premier League football for Blackburn Rovers (on a loan spell) and later Charlton Athletic.

Following a two-year stint with Wolverhampton Wanderers, Jay joined the ranks at Cardiff City, where, incidentally, he would go on to score his first goal for the Bluebirds in a 2-1 victory against Coventry City.

Playing as a vital part of City's potent attacking lineup throughout the 2010/11 season, the forward would go on to be the Club's top goalscorer during the campaign, netting a total of 18 times from 37 league appearances.

His efforts in the opening months of the campaign didn't go unnoticed, either, with 15 goals in 16 matches played earning Bothroyd an international call-up to play for England in a friendly against France in November 2010.

With City unsuccessful in a Play-Off run at the end of the 2010/11 campaign, Jay joined Premier League club Queens Park Rangers, where he played for two seasons before moving to play for Thai club Muangthong United.