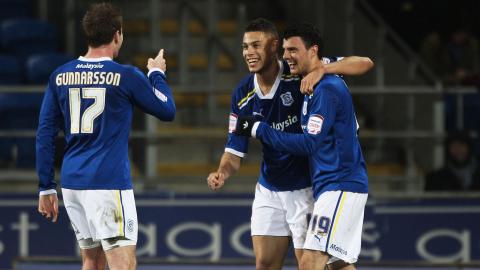 Three goals in six first half minutes helped the #Bluebirds to victory when Peterborough United visited us in 2012.#CityAsOne

As the Bluebirds welcome Peterborough to Cardiff City Stadium on Wednesday night (09/02), we take a look back at a memorable performance against the Posh back in 2012.

Despite a positive start to the campaign, City went into the contest on a difficult run of form, having fallen to defeats to Blackpool and Leicester City in February.

Peterborough, managed by Darren Ferguson, were struggling in the Championship, but while looking for their first win of the calendar year, remained a stern challenge for City.

The Bluebirds stepped up to the task admirably, taking control of proceedings in a memorable six minutes.

With 34 minutes on the clock, Peter Whittingham’s wicked corner found its way past soon to be Bluebird Joe Lewis and into the net to give City the lead, settling the early nerves.

It took just four minutes for the Bluebirds to double the advantage, as striker Rudy Gestede was on-hand to head home the second.

In a fantastic period of dominance, City found a swift third in the 40th minute, as Slovenian midfielder Haris Vučkić, on loan from Newcastle United, struck his first goal for the club to ensure the three points.

After City controlled the second period and restricted the Posh’s chances, the visitors found a consolation goal in added time thanks to top scorer Paul Taylor.

It was a notable season for City in more ways than one, with a fantastic Carling Cup campaign leading to a final against Liverpool.

As for the Championship season, the Bluebirds finished the campaign with a brilliant month in April, recording crucial wins over Middlesbrough, Barnsley, Derby County and a final day win at Crystal Palace to secure a play-off position.

City earned a play-off tie with West Ham United, who had a hugely talented squad that went on to secure promotion back to the Premier League, having overcame the Bluebirds over two legs.