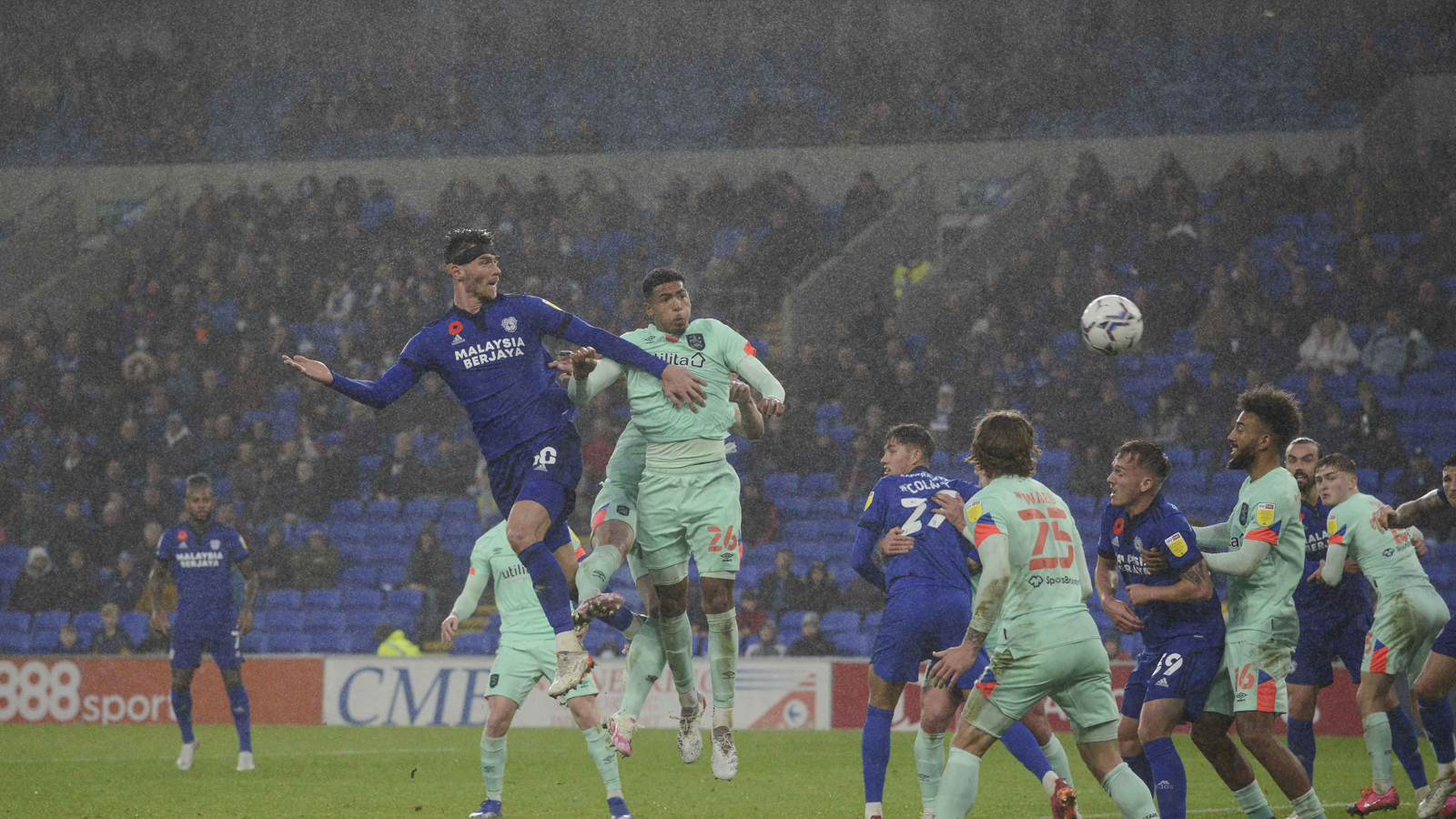 Kieffer Moore's second-half brace earned City all three points at CCS on Saturday afternoon, as the Bluebirds returned to winning ways against the Terriers.

Following an early half-chance for Ralls, who wore the captain’s armband for City the Welsh capital, it was the visitors who took the lead through Daniel Sinani. The Luxembourg international, on loan at Huddersfield from Norwich City, capitalised on a loose pass from Mark McGuinness, held off the challenge of Curtis Nelson and slotted the ball past Alex Smithies and into the net.

Kieffer Moore was involved minutes later as the Bluebirds searched for a leveller, with Terriers’ goalkeeper Lee Nicholls surrendering possession easily. However, the Welsh forward opted to find Mark Harris instead of shooting on goal, with the danger eventually being cleared. Ralls and Moore combined again minutes later, with the midfielder heading wide of the upright from the striker’s flick-on.

Further shots from Ralls and Perry Ng followed, with the right back cutting smartly onto his left foot and curling a fine strike which was well-held by Nicholls, with Town holding a slender lead going into the half time interval.

Moore as heavily involved in the opening stages of the second half, with the Bluebirds deploying a more direct approach as they went in search of an equaliser. The 29-year-old received the ball from the marauding Ryan Giles, before rolling his marker and moving into a central area, but fired high and wide of the upright.

Alex Smithies was called into action at the other end just moments later, producing a superb one-handed stop to deny young Huddersfield defender Levi Colwill. The Chelsea loanee found himself free inside the six yard box and nodded on goal, with the City stopper clawing the ball onto the post to prevent a certain second.

Former Bluebird Danny Ward enjoyed two chances soon afterwards, and was unfortunate not to find the back of the net. The striker made the most of a defensive mix-up to clip the ball over Smithies and on goal, but the Bluebirds were fortunate to see the ball clip the post before being cleared by Aden Flint. Soon afterwards, substitute Josh Koroma darted into the box and drove a low ball across the face of goal, with Ward inches away from finding the net.

Thankfully, City were able to weather the storm and find an equaliser after 74 minutes. A superbly delivered corner kick from Ralls was met by Moore, who did well to create space before powering a header in at the near post to get City back on level terms. Perry Ng continued to threaten on the right flank, sending an effort narrowly wide of goal just moments later, as the home crowd began to sense that a winner was on the cards.

The introduction of Isaak Davies and Rubin Colwill gave the Bluebirds a renewed attacking energy, though the game soon dipped in tempo after Moore’s equaliser. With possession changing hands frequently inside the final few minutes, it was the two Academy graduates who combined to create the decisive moment of the match. Breaking forward at speed, the ball was played out to Davies, who produced a fine piece of skill to beat his man and advance down the left flank to the byline.

The 20-year-old then delivered a nonchalant chipped cross to the back post, with Moore once again doing excellently to create space between him and Tom Lees, rising highest to send the ball back across goal and into the bottom far corner. Moore’s fourth goal of the season sealed City’s comeback, with the full-time whistle confirming the Bluebirds’ return to winning ways in the most dramatic of circumstances.

After the international break, the Bluebirds will take on Preston North End on Saturday, November 21st, with a 3pm kick-off at Deepdale.