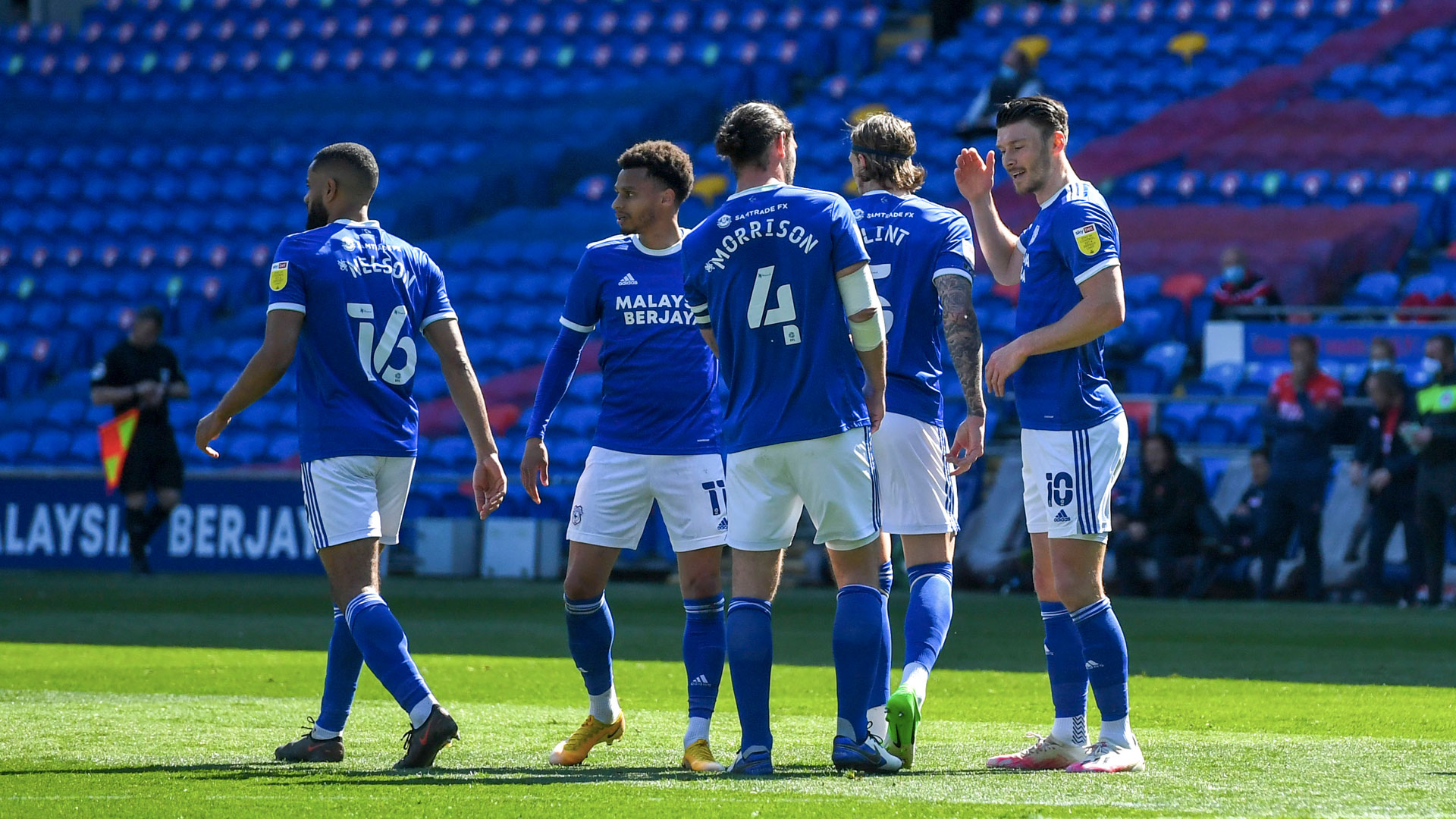 The Bluebirds returned to winning ways with a hard-fought home victory over Wycombe Wanderers on Saturday afternoon.

Kieffer Moore netted a brace to reach 20 Championship goals for the season, helping City to secure an important win over a battling Wycombe side.

Bluebirds boss Mick McCarthy made three changes to his starting eleven at Cardiff City Stadium; skipper Sean Morrison returned to the lineup after injury, Josh Murphy replaced Harry Wilson, whilst Rubin Colwill came in for his full debut in a City shirt.

Colwill and Murphy combined after four minutes as the Bluebirds looked to take an early lead, with Wycombe stopper David Stockdale called into action. The young midfielder did well to pick out the winger, who, unmarked in the area, fired a low effort on goal. Murphy’s right-footed strike from the left-hand side of the penalty area was saved by Stockdale in the centre of the goal, giving the visitors an early warning of City’s attacking intentions.

Indeed, McCarthy’s men went on to take the lead after 22 minutes, with Kieffer Moore netting a superb solo effort. Collecting a long ball on the far touchline, the Welsh international dropped his shoulder to evade countryman Joe Jacobson, before advancing into the penalty area. The striker then skipped past Fred Onyedinma to earn a sight of goal, and applied a perfectly executed, curling finish into the bottom corner of the net; a fantastic strike which gave City a deserved lead.

The Bluebirds continued to create the better attacking opportunities in the first period, with Marlon Pack hitting the target at the end of a swift counter attack which had involved Moore and Colwill. Making a fine impression during his first start for the club, 18-year-old Colwill went close himself just after the half hour mark, almost matching Moore with a solo strike. The midfielder picked up the ball on the edge of the area, twisting and turning to beat his man and make space, before shooting into the side netting from a tight angle.

The visitors grew into the game during the final stages of the first half, with Onyedinma shooting wide of Alex Smithies’ upright after 36 minutes. Just before the interval, the winger was again involved in the City area, earning a penalty kick which would bring the Chairboys level. Onyedinma drove towards the byline and forced a challenge from Morrison; the skipper was an inch away from applying a perfect tackle, but was unfortunate to clip the Wycombe man and send him to the ground. Cardiff City Academy graduate Jacobson made no mistake from the spot, rolling the ball down the middle of the goal to send the two sides in at the break on level terms.

The second period brought fewer chances than the first, with the visitors attempting to find that all-important goal in order to aid their chances of Championship survival. Uche Ikpeazu had a golden chance to do so just past the hour mark, connecting well from close-range after receiving a cut-back pass. However, Smithies reacted well to block the ball, preventing the visitors from turning the game on its head.

That save proved to be vital just five minutes later, as the Bluebirds regained the lead thanks to Moore’s 20th strike of the campaign. McCarthy’s men patiently played the ball around the Wanderers’ box, with Curtis Nelson finding Leandro Bacuna in space. The Curaçao international delivered a looping cross to the back post which was met by Ciaron Brown, who nodded the ball back towards the penalty spot. Waiting unmarked was Moore, who fired into the net with ease to become the first City player since Peter Whittingham in 2009/10 to reach the 20-goal mark in the league.

Gareth Ainsworth’s men retained the majority of possession in the final stages, desperately in need of a victory, but were unable to break through the resilient Bluebirds’ backline. City enjoyed several opportunities on the counter attack, with Pack going closest. The midfielder struck from distance late on, with his effort looping in front of Stockdale before clipping the post and bouncing away to safety.

City were reduced to ten men for the final few minutes of the entertaining fixture, with Will Vaulks being shown a red card for a poor tackle during injury-time. However, the sound of the final whistle confirmed all three points for the Bluebirds, with a visit to Birmingham City up next for Mick McCarthy’s men on Saturday, May 1st (3pm).