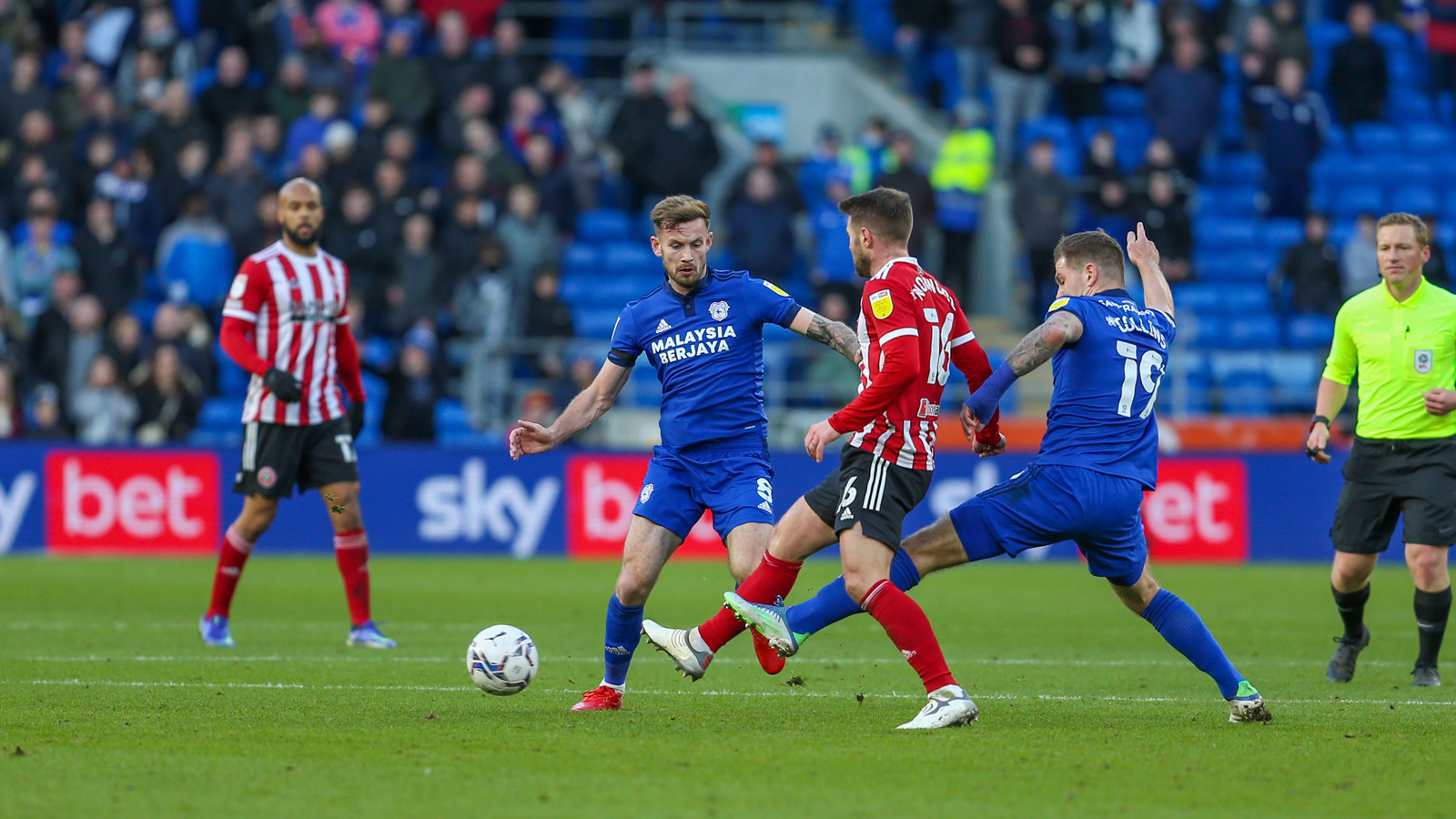 A ten-man Cardiff City fell to a narrow defeat to Sheffield United at Cardiff City Stadium on Saturday afternoon.

Boss Steve Morison made two changes to the side that defeated Luton Town last week, with Isaak Davies and Harris coming into the starting XI.

City started brightly and forced the opening chance, as Joe Ralls’ dangerous corner delivery narrowly evaded the on-rushing Curtis Nelson. The visitors responded with an opportunity of their own, with Jayden Bogle’s cross almost picking out McGoldrick at the back post. Blades striker Sharp went close to opening the scoring, only for his header to be saved by the well-positioned Alex Smithies.

The Bluebirds shot-stopper was again on-hand to pull off a fine save, denying Sharp for a second time with the striker through on goal. As the visitors continued to create opportunities, a corner routine found Conor Hourihane, who fired over from the edge of the box. McGoldrick beat the offside trap for a chance to strike at goal, but Smithies saved once more.

Loanee Ryan Giles came close to setting up the opener, driving a low cross into the area that narrowly evaded Wales international Harris. In a positive spell for City, McGuinness met Ralls’ corner with a towering header, deflecting off Bogle and saved by Wes Foderingham. The Bluebirds’ persistence paid off, taking the lead in the 32nd minute. Ralls’ fantastic chip over the Blades defence found Harris, who fired home the opening goal.

City instantly looked to double their lead, as a fine individual run from Davies saw him force a save out of Foderingham. On the stroke of half-time, Bogle found space at the back post and looked certain to equalise for the Blades, only to be denied by a sublime block from Nelson, ensuring the Bluebirds went into the break with a 1-0 advantage.

Cardiff went down to ten men early in the second period, as captain Sean Morrison was given a straight red card for bringing down Sharp. From the resulting free-kick, Gibbs-White fired over the woodwork. The visitors made use of the man advantage, finding a leveller in the 60th minute, as Gibbs-White cut inside and struck into the top corner.

Paul Heckingbottom’s side went close to a quick-fire second, with McGoldrick’s close-range effort heroically kept out by Smithies. City responded well, as Perry Ng’s cross from the right was met by substitute Aden Flint, who headed over the woodwork before being caught offside.

The visitors took the lead in the 73rd minute, as an intricate move led to Gibbs-White squaring for Sharp to turn home from close-range. Two minutes later, Gibbs-White drove forward and found McGoldrick on the right side of the area, whose effort trickled in off the post.

The Bluebirds responded well to falling further behind, with substitute Kieffer Moore firing over from distance, before heading wide following Giles’ cross into the area. City were rewarded for applying late pressure, as McGuinness headed home from a corner, but it wasn’t enough to mount a late comeback, as the Blades secured all three points.

City return to action next week as they travel to St Andrew’s to face Birmingham City on Saturday, December 11th, 3pm KO.