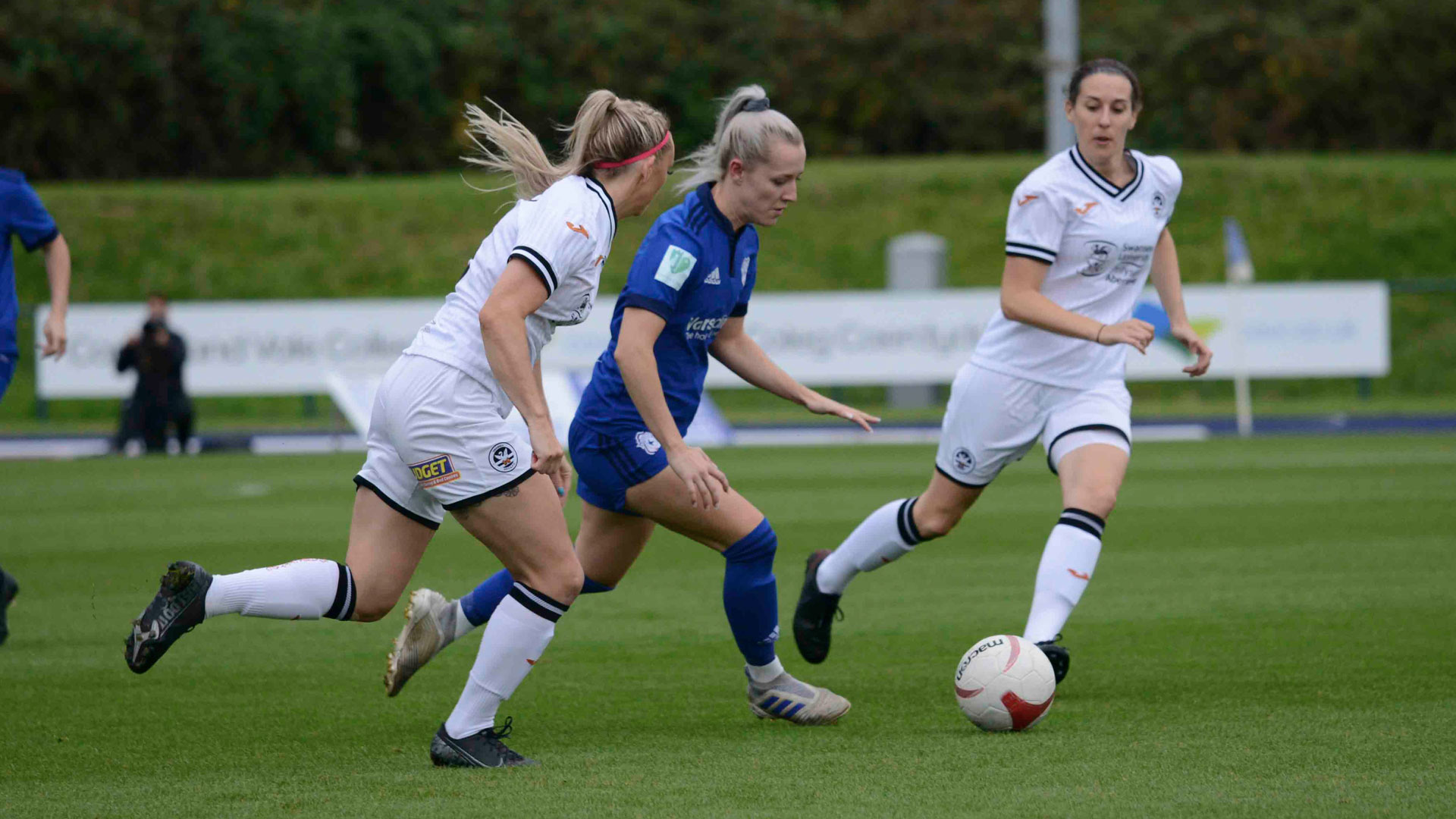 Despite a determined performance, the Bluebirds suffered defeat against Swansea City at Cardiff International Sports Campus on Sunday afternoon.

Iain Darbyshire made four changes for this Adran Premier top of the table clash with Phoebie Poole, Lisa Owen, Ceryn Chamberlain and Seren Watkins welcomed back into the starting XI.

Both teams jostled for control in the early exchanges. City’s top goal-scorer Poole attempted to open the deadlock after seven minutes, but her shot was held by Claire Skinner. A moment of pure magic gave the champions the lead in the capital one minute later. Chloe Chivers unleashing an unstoppable shot from 35-yards, that stunned City shot stopper Chamberlain.

The away side went on the front foot after scoring, but the Bluebirds held strong and eventually turned the play around. Danielle Green saw her powerful low strike tipped wide on 25 minutes. Midfielder Watkins tried her luck from distance 11 minutes later, but Skinner was again on hand to gather.

City went close to levelling twice towards the end of the half, with the Swansea goal leading a charmed life. Green was twice stopped from netting by last second blocks, while Danielle Broadhurst’s header was saved. The experienced No.10 continued going for the Bluebirds despite taking a heavy blow to the nose earlier in the half. Darbyshire’s side arguably deserving more than going in at the interval behind after a dogged opening half display.

The away side scored a fortunate second goal five minutes into the second half. The dangerous Katy Hosford saw her corner cleared, but on a further attempt to cross, Hosford’s effort evaded all in the box and drifted in at the back post.

Substitute Amy Williams went extremely close to reducing the deficit after 70 minutes, reaching Broadhurst’s cross, only to volley beyond Skinner, but just wide of goal.

Sadly, this missed chance was punished almost immediately as Swansea added a third goal. Substitute Rhianne Oakley was adjudged to have breached the offside trap and she rounded Chamberlain before slotting in. Oakley scored a fourth goal for her side four minutes later, making the most of a rare slip in the City defence, and firing in one-on-one.

The Bluebirds kept their heads up and fought hard, but they couldn’t find a consolation goal or a way back into the game. Swansea taking home all three points from this first South Wales derby of the campaign.

City head coach Iain Darbyshire spoke to cardiffcityfc.co.uk after the encounter in Leckwith.

“For quite a lot of the game, we played exactly the way we wanted," Iain began. "We put them under a lot of pressure. We had a couple of chances ourselves and if they go in it is a different game. Ultimately, they’re very effective at what they do. They’re the team to beat.

“Four-nil is a very flattering scoreline but it was that score and we’ll look back at it in-depth and assess those moments that made the difference. We won’t dwell on one result though. We’ll use it as motivation moving forward.

“As a squad, we'll keep grafting and eventually we’ll be up there challenging. We’re developing ourselves on and off the field at the moment.

“We’re going to take it game-by-game. We’re a young and hungry side. We’ve got new players and a new way of playing. It is all fresh.

“If we keep working hard and coming together as we are - with our U19s and U16s performing how they are at the moment - then the future is very bright.

“We’re proud of the girls and they’re putting everything in. We’ve got a great team spirit and we’ll keep pushing on."