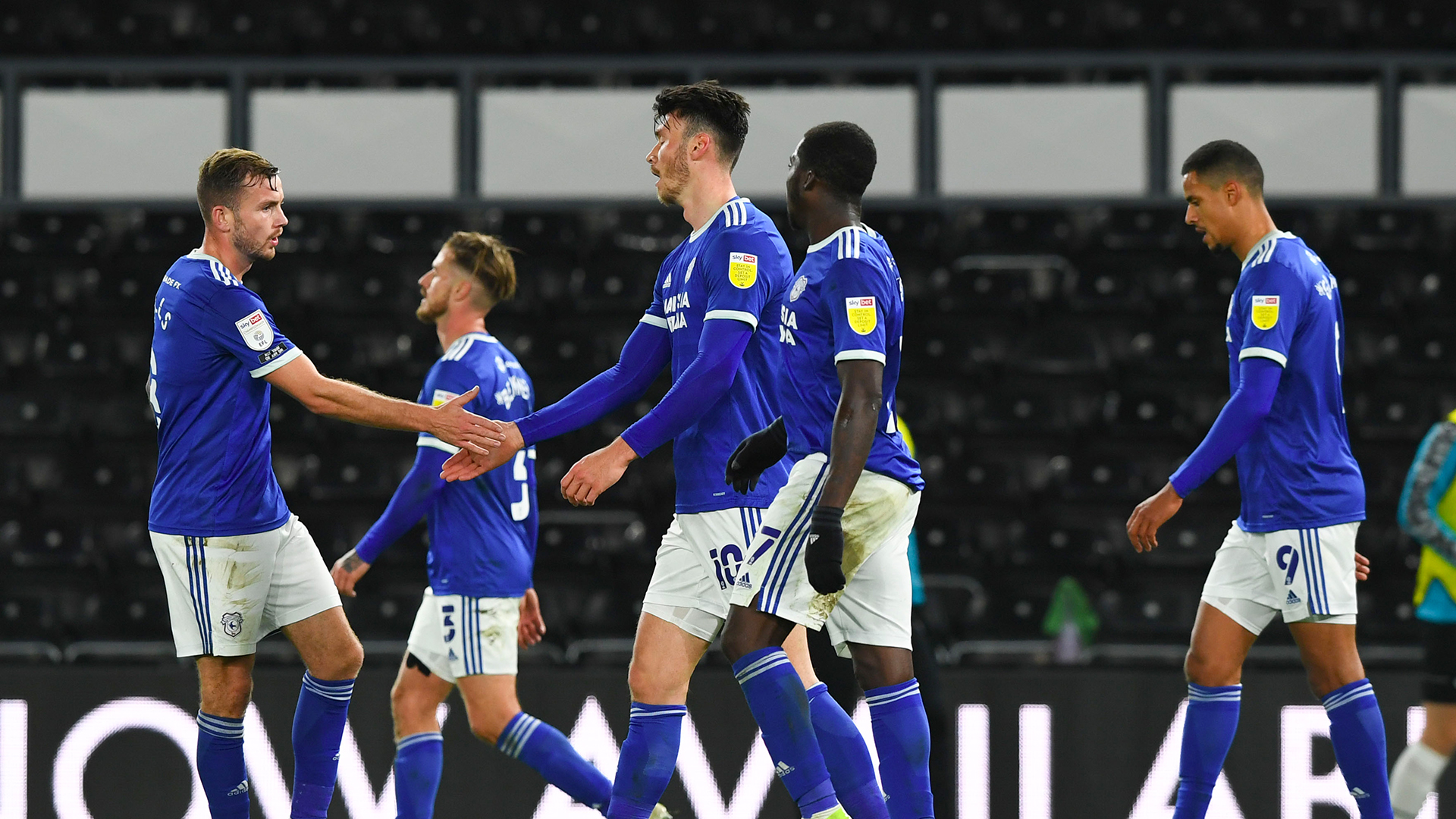 Cardiff City battled to a 1-1 draw with Derby County at Pride Park on Wednesday evening.

The Bluebirds had fallen behind to Martyn Waghorn's first-half free-kick, but found their leveller through Kieffer Moore's effort thirteen minutes from time, having twice hit the woodwork.

Neil Harris made four changes to the side that had drawn against Middlesbrough, with Leandro Bacuna, Joe Bennett, Marlon Pack and Junior Hoilett coming into the side.

Kicking off midweek during a packed fixture schedule for the two sides, the opening exchanges took place at a steady pace, with both defences afforded plenty of time on the ball.

While the Bluebirds made the first inroads with a long throw from Will Vaulks and a searching Sheyi Ojo cross, the home side soon upped the ante.

And the Wales international was again involved as he went down under Joe Ralls' challenge outside the area. The Rams were awarded a free-kick, which Martyn Waghorn curled over the wall and into the top corner.

With the wind in their sails, the home side went looking for a second, which they would have found had Joe Bennett not blocked Kamil Jóźwiak's effort wide of target.

While Rams defenders Matthew Clarke and Curtis Davies both had aerial opportunities in the City box, the Bluebirds had one big chance to equalise before the interval.

Vaulks lofted a perfect cross towards the head of Kieffer Moore, who managed to wrestle away his marker, but placed his downwards header against the post.

Five minutes after the restart, City hit the woodwork again as they continued their hunt for a leveller with increased intensity.

Ojo delivered an excellent ball into the area and, with Sean Morrison occupying two markers, Hoilett drifted in at the back post to head back across goal and strike the upright.

The home side continued to look threatening at the other end, with Lawrence, Waghorn and Jóźwiak all sending crosses into the six-yard box.

The Bluebirds were holding firm in the second period though, and were beginning to create more through the attacking threat of Ojo.

It was the Liverpool loanee who did create the Bluebirds' equaliser with 13 minutes remaining. He threaded a ball through behind the Derby defence for Moore, who slotted the ball between the legs of Kelle Roos.

The finale of the match developed into an end-to-end affair, with Waghorn stinging Smithies' palms and Ojo seeing a header saved.

But the referee's whistle signalled an end to proceedings and another point for the Bluebirds, now unbeaten in five Sky Bet Championship matches.