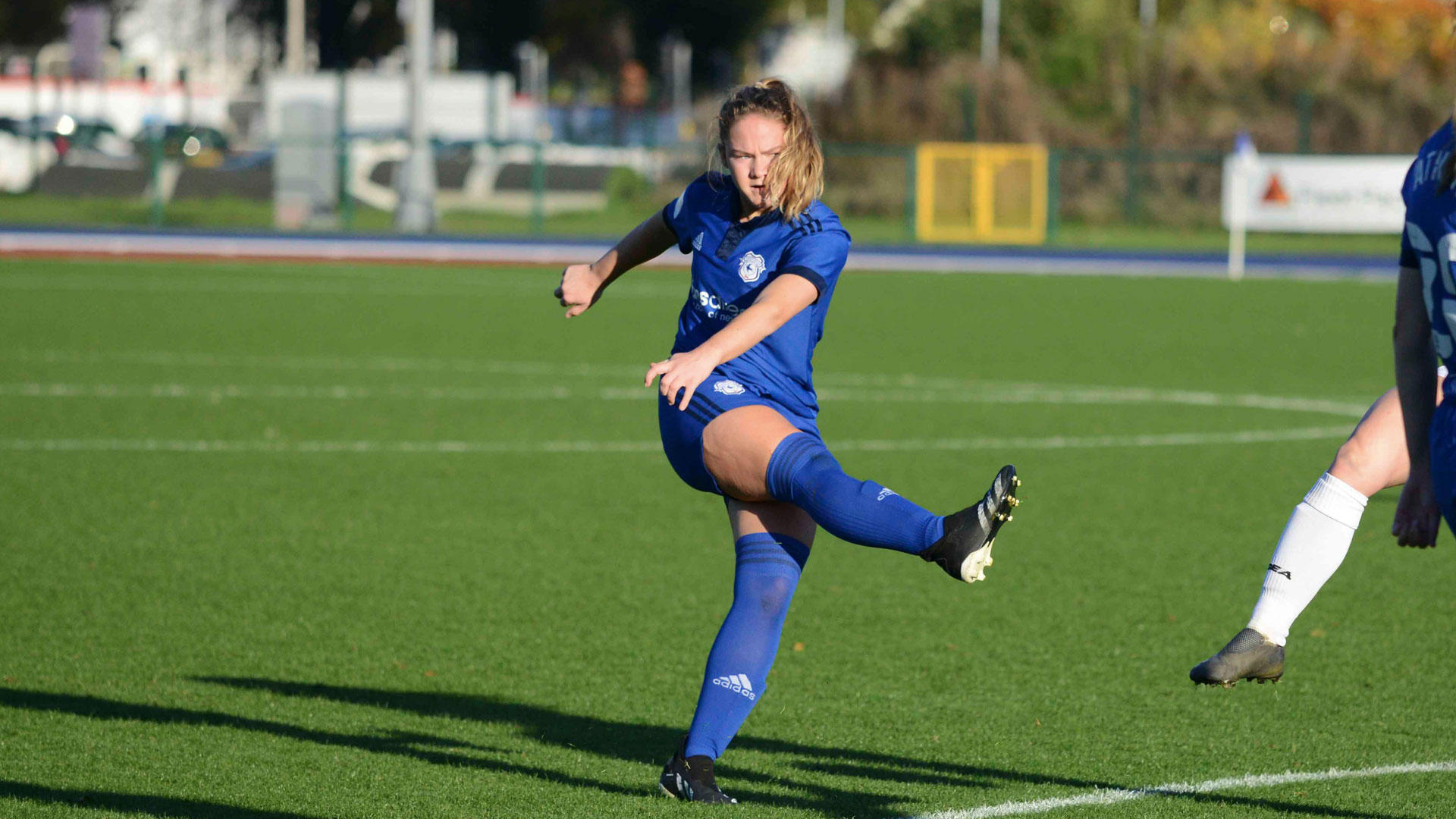 Cardiff City FC Women earned a 3-0 victory over Pwllheli on Sunday afternoon to book a place in the next round of the Adran Trophy.

Phoebie Poole’s first-half brace, along with Zoe Atkins’ goal after the interval was enough to secure all three points.

Boss Iain Darbyshire made four changes to the side that faced Cardiff Metropolitan University before the festive break, with Amelia Forkings, Emily Bayliss, Zoe Atkins and Megan Saunders coming into the starting XI.

After a lively start from the hosts, City settled and created chances for the opener. Left-back Bayliss did well on the left to cross for Poole, whose shot on the turn was saved. Saunders also went close on her return to the side, as she struck just over from the edge of the box. Bayliss was again involved in a positive attack for the Bluebirds, playing Danielle Green through, who was just beaten to the ball by the goalkeeper.

Pwllheli looked to counter-attack and did so with intent, finding space in the box, only for Bayliss to clear with a brilliant challenge. City continued to press for the opener, as Seren Watkins tried her luck with a great strike from distance to force a save. Watkins’ corner delivery was pinpoint to force another chance for the Bluebirds, with captain Siobhan Walsh heading onto the woodwork.

City’s persistence paid off, taking the lead in the 38th minute. A great run in-behind from Saunders allowed the playmaker to find Poole in the box, who calmly fired home to break the deadlock. The Bluebirds had their tails up having gone ahead and found a second goal on the stroke of half-time, as a brilliant team move saw Saunders cross low for Poole to net and send City into the break with a 2-0 lead.

The Bluebirds started the second period on the front foot and went close to a third through Watkins’ set-piece delivery, finding Poole at the back post, but her close-range effort was saved. City weren’t to be denied however, as a great ball into the box from Green fell to Atkins to tap home in the 51st minute.

Darbyshire’s side continued to create opportunities, with the full-backs combining. Bayliss found space on the left to deliver a brilliant cross for substitute Ffion Price, whose strike rattled the post. City looked dangerous with every attack, with Green’s low deliveries from the right almost finding on-rushing attackers.

Price’s deliveries from corners created chances for the Bluebirds, as substitute Hollie Smith fired narrowly wide of the post. In another attack, a great interchange between Bayliss and Saunders saw the latter find space to force a save from the goalkeeper. After a professional performance, City booked their spot in the next round of the Adran Trophy.

City return to action next week as they travel to Cyncoed Campus to face Cardiff Metropolitan University on Sunday, January 17th. 2022.

“It was a tough game," Iain began. "The conditions were challenging and travelling a great distance to the venue made it more difficult, but I thought the girls applied themselves really well.

“Credit to Pwllheli. They really battled hard and made it difficult for us, so we’re happy to be in the next round. It’s another step in hopefully winning silverware.

“When we needed it, the girls stepped up. They defended really well, we had to adjust to the pitch and it was difficult to play our football, but we got the job done.”

Highlights of this fixture will follow later this week on Cardiff City TV!