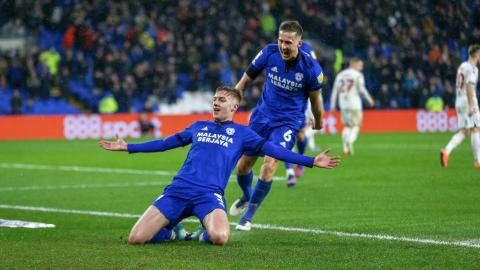 After a Man of the Match performance in the Bluebirds’ victory over Coventry City on Tuesday night, left-back Joel Bagan spoke to the press to discuss the result.

The Academy graduate netted his first professional goal over the weekend against Millwall, before following up with a stunning strike to net his second in as many games.

Commenting on his new-found goal-scoring form, Bagan expressed his delight after such a positive week.

“To score at home, get a clean sheet and a win against a good side, it meant a lot,” he began. “I hadn’t scored for a long time before these two, so I couldn’t believe it when it went in. It’s a great feeling.

“We’ve said that we’re looking up after the last few results we’ve had. We definitely think we can push up the table now and finish as high as we can.”

The victory is the Bluebirds’ fourth in the last five fixtures, taking City up to 19th in the Championship table.

After handing Bagan his Man of the Match award, midfielder Will Vaulks was full of praise for his teammate and the side’s recent positive results.

“I think it’s been slower progress than we’d have liked, but we’re getting there now. It’s been a shame to come this far in the season and just be kicking on now, but it’s better late than never.

“I think we showed how far we’ve come. When we played Coventry away, we got battered, it was only 1-0, but we were so far from them.

“Tonight, I thought we were the better team. That goal has been coming, he chopped inside twice against Millwall. He looks like he’s got his confidence back and I thought he was excellent."

With the second goal coming in the form of a shrewd finish from substitute Mark Harris, both City goals came from Academy graduates.

With Blackpool up next for the Bluebirds on Saturday (19/02), Vaulks insisted that the squad are looking ahead with positivity.

“The atmosphere feels a lot better. As players, we have to drive that. We can’t just rely on the fans to get us going every game.

“I think we’re giving the fans something to cheer about now. Getting that first goal is so important. It’s something we didn’t do well enough earlier in the season.

“If you get that first goal, you feel the players relax. We have a young squad, young players out there who aren’t used to playing in front of this many people.

“I think that first goal just settles everyone. Joel and the other young lads are growing in confidence now and are kicking on.”