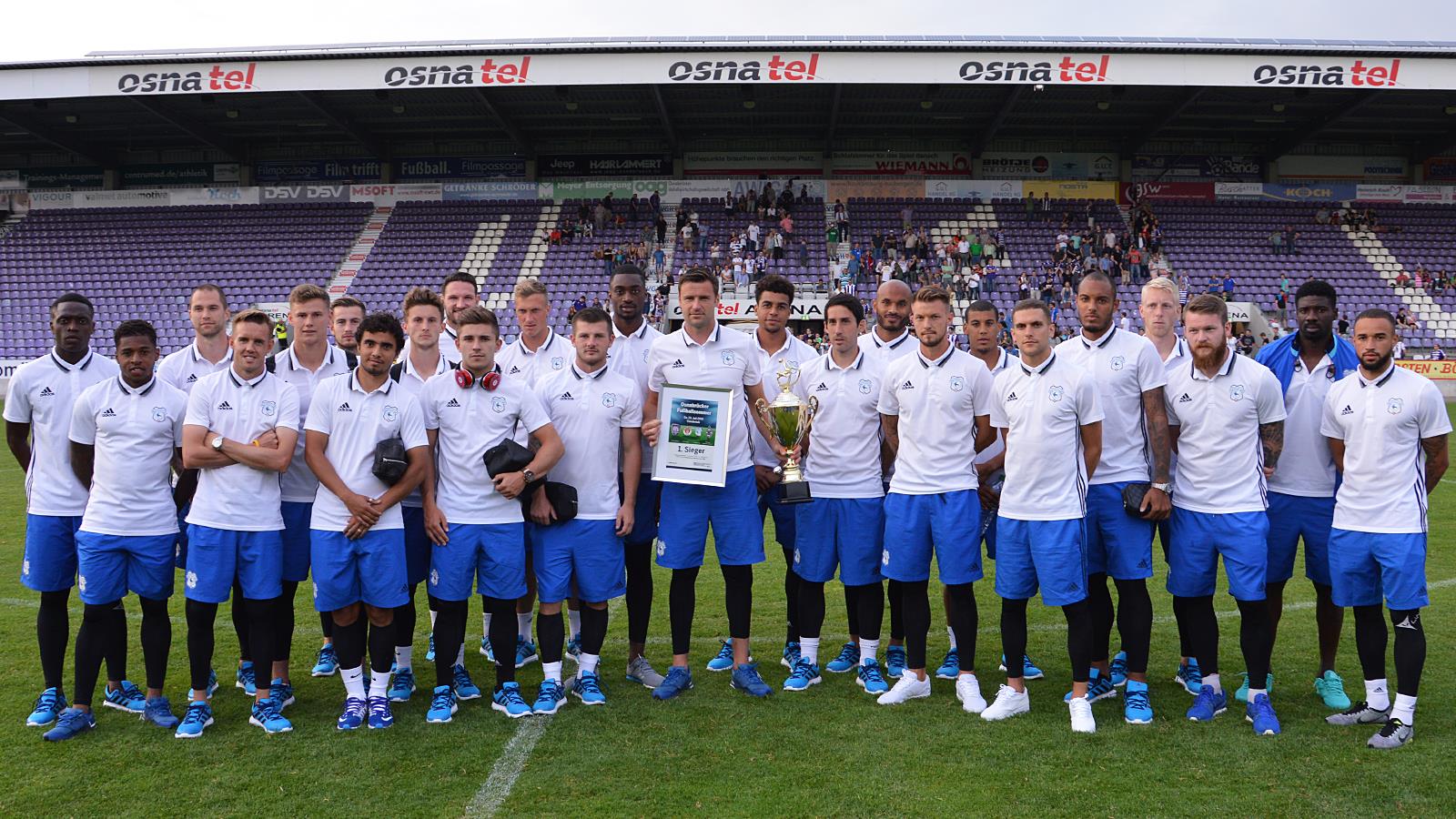 Cardiff City secured back-to-back victories to lift the Osnabrück Tournament trophy on Saturday.
The Bluebirds began proceedings with a 3-0 victory over the hosts, VfL Osnabrück, with goals from Frédéric Gounongbe, Declan John and Anthony Pilkington proving decisive over the course of two half hour periods.
Osnabrück created few chances during the contest, with City’s midfield mopping up some sloppy defending with ease and using the ball to decisive effect.
Lex Immers' scored City's opener in 2-1 victory over FC St. Pauli
Cardiff kicked off their second game – against FC St. Pauli - half an hour after the first had finished, with only two changes to the side that had tasted victory earlier in the afternoon.
Ben Wilson replaced David Marshall in goal, whilst Joe Ralls stepped into midfield in place of Peter Whittingham to take on the Bundesliga 2 side.
And it wasn’t long before the Bluebirds had the advantage again. Two minutes into the contest and the impressive Declan John whipped in a perfect cross from the left that Lex Immers brought down and fired past a helpless Philipp Heerwagen.
After fifteen minutes, wholesale changes were made by the manager as City sought to utilise the 120 minutes playing time to maximum effect and benefit. A slight re-shuffle in formation brought about a momentary spell of inspiration for St Pauli, as Maurice Litka capitalised on an excellent cross to slot home underneath Wilson.
City would be unperturbed by the setback though and soon set about re-establishing their advantage. Substitute Kenneth Zohore pressed the FCSP back-line, forcing defender Lasse Sobiech into a communication mix-up with goalkeeper Heerwagen – the former directing his pass beyond the latter and giving Cardiff a 2-1 advantage. It was one they wouldn’t relinquish.
Bundesliga side Borussia Mönchengladbach beat St Pauli 5-4 on penalties later in the afternoon and then VfL Osnabrück 2-1 in the final game of the day.
But it was the Bluebirds who would be awarded the victory for the six points they picked up courtesy of back-to-back victories, Mönchengladbach finishing second by virtue of having to take the hosts to a shoot-out in their opener (their contest was thus considered a draw at the full time whistle).
A welcome bonus indeed for the Bluebirds as they look ahead to their penultimate pre-season friendly against VfL Bochum on Tuesday…
CARDIFF CITY FC vs. VfL OSNABRÜCK: Marshall, John, Fabio, Ajayi, Connolly, Tutonda, Whittingham, O’Keefe, Immers, Pilkington, Gounongbe. (No substitutes used).
VfL OSNABRÜCK: Lehman, Blexer (El-Bouazzati), Krasniqi, Wilters, Hohnstedt, Renneke, Syrtie (Tuting), Gros, Sangare, Kristo (Tigges), Klaas (Arslan).
CARDIFF CITY FC vs. FC ST. PAULI: Wilson, John (Harris), Fabio (Adeyemi), Ajayi, Connolly (James), Tutonda, Ralls, O’Keefe, Immers (Kennedy), Pilkington (Noone), Gounongbe (Zohore).
FC ST. PAULI: Heerwagen, Hedenstad, Sobiech, Rasmussen, Keller, Miyaki, Choi, Rosin, Litka, Duksch, Empen. (No substitutes used).
Highlights of the two games, trophy ceremony and full reaction to follow on Cardiff City Player HD & YouTube...