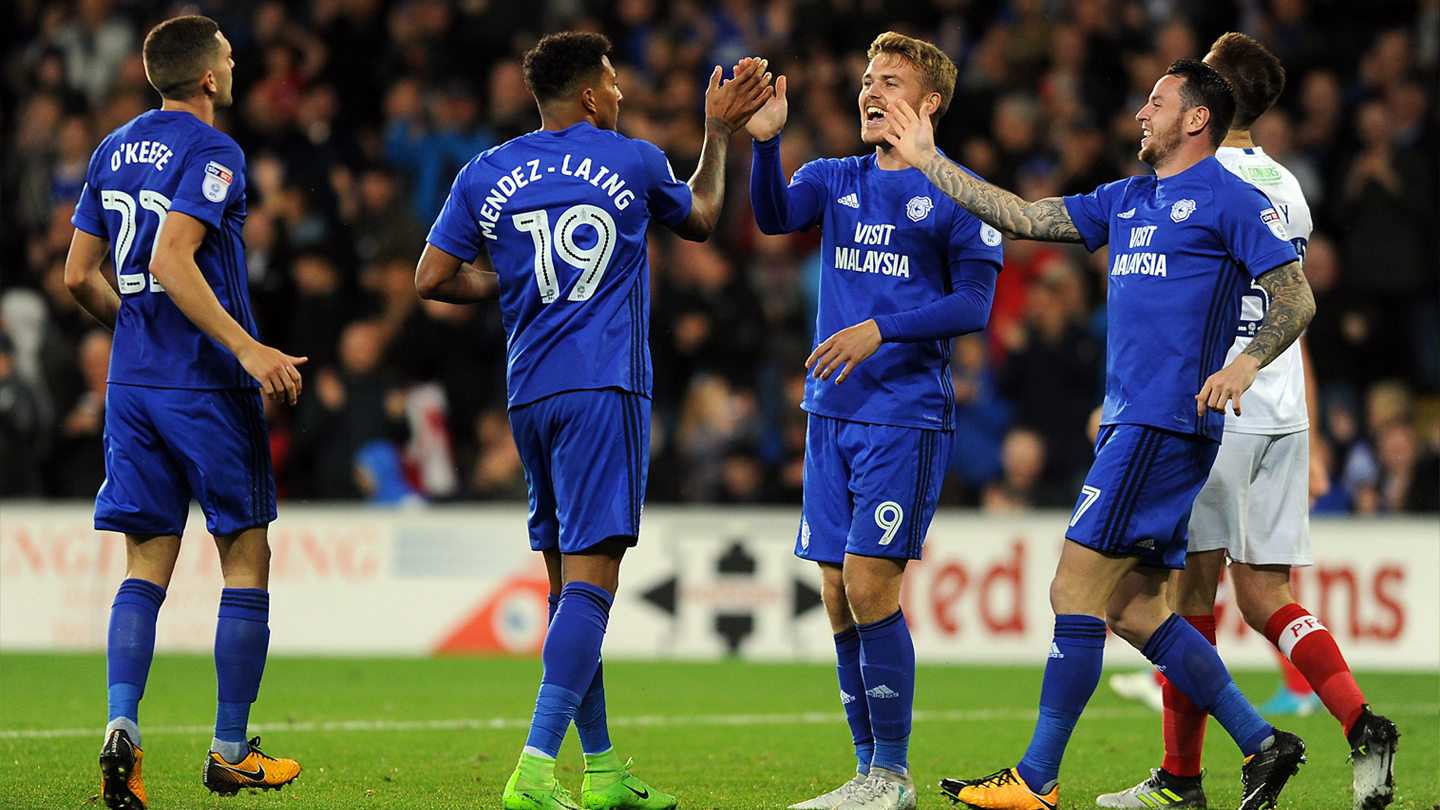 Match report for Cardiff City vs Portsmouth on 08 Aug 17

The Bluebirds advanced through to the Second Round of the Carabao Cup with a 2-1 win over League One side Portsmouth.

Chances were scarce in the first twenty minutes, with both sides attempting to keep possession for long spells. City’s first major opportunity came in the fifteenth minute, through Danny Ward. His shot from the edge of the area took a deflection which narrowly diverted the ball away from the bottom corner. At the other end, Kyle Bennett’s low effort fizzed just wide of Brian Murphy’s goal.

On the half hour mark, Ward had another attempt on goal, after a good cross from Matthew Kennedy. The forward connected well with a powerful header, but ‘keeper Luke McGee wasn't troubled.

However, Pompey took the lead two minutes later, following good work on the left hand side. Kal Naismith delivered a cross into the centre of the box, which was inadvertently diverted into the Bluebirds’ net by Sean Morrison.

City came close to an equaliser through a Greg Halford long throw and a Lee Tomlin corner, although Portsmouth managed to clear their lines on both occasions.

Bluebirds back in it...

City rattled the woodwork only seconds after the break, through Bruno Ecuele Manga. An inviting free-kick delivered by Tomlin was met by the Gabonese defender, who saw his header pushed onto the crossbar by McGee.

The Bluebirds maintained the pressure, and were rewarded with an equaliser two minutes later. On the left flank, Matty Kennedy used his pace and skill to bypass his marker before flashing a low cross across the box. The ball evaded Tomlin and Ward, before arriving at the feet of recently-introduced Nathaniel Mendez-Laing, who neatly applied a side foot finish.

The Bluebirds stepped up their search for a winner, with some well worked passing moves in-and-around the Pompey box. One such move saw Mendez-Laing tee up Kennedy, with the winger seeing his close-range effort poked to safety by McGee. Minutes later, the Scot had another opportunity, heading wide from a superb Loïc Damour cross.

City entered the final ten minutes looking the most likely team to score, but faced a stern Pompey defence who were keen to throw themselves in front of any Cardiff shot on goal. In the dying moments, Mendez-Laing waltzed into the box before teeing up Tomlin, whose shot was blocked by yet another Portsmouth body. However, the Bluebirds couldn’t find a winner, as the game crept into extra time.

Second half substitute Junior Hoilett had the first big chance of extra time, shooting low towards the far corner, only for the impressive Pompey keeper to keep it out. The Canadian winger had another effort excellently denied just before the extra-time interval. An inch perfect crossfield ball from Jazz Richards was controlled by Hoilett, before he drove forward and shot low, bringing a smart save from former Tottenham youngster McGee.

In the second additional period, substitute Ibrahim Meite narrowly missed the target with his first real opportunity after a wonderful Hoilett cross.

With seven minutes to go, the Bluebirds found their well-deserved winner through former Pompey man Greg Halford. A driven corner from Hoilett evaded the mass of bodies in the box, falling to City’s number fifteen at the far side of the area. Halford powerfully half-volleyed into the bottom corner to ensure safe passage into the Second Round, which will be drawn on Thursday.