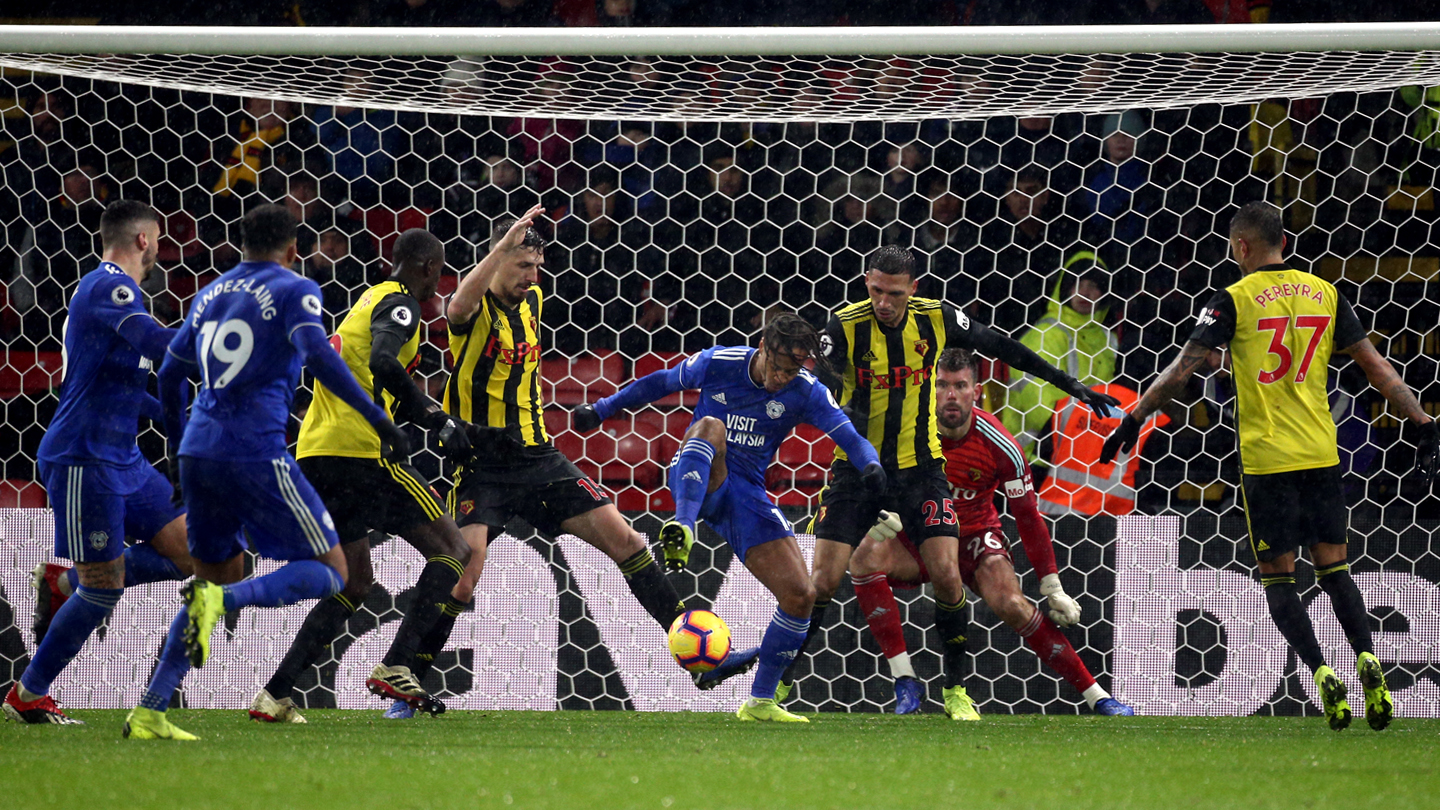 Match report for Watford vs Cardiff City on 15 Dec 18

Despite a spirited fightback at Vicarage Road, Cardiff City slipped to a 3-2 defeat to Watford in the Premier League.

The hosts had built up a convincing lead through goals from Gerard Deulofeu, José Holebas and Domingos Quina. However, Junior Hoilett’s wonder-strike from distance and Bobby Decordova-Reid’s effort two minutes later almost saw a sensational turnaround in Hertfordshire’s torrential rain.

Neil Warnock made just one change to the side that defeated Southampton at Cardiff City Stadium the week before, bringing in Hoilett in the place of Nathaniel Mendez-Laing.

Watford scored the opening goal of the match on 16 minutes, with Deulofeu slipping through Cardiff City’s defence in possession of the ball and shooting low to Neil Etheridge’s right from inside the box.

The Bluebirds’ first real chance came not long after, with Victor Camarasa’s through ball finding Harry Arter inside the box. His low cross past Watford ‘keeper Ben Foster was too quick for Josh Murphy to meet, however, and the ball rolled wide.

Watford pressed City back, with Roberto Pereyra having an effort blocked on the half-hour mark. The Bluebirds were quick to respond though, and Junior Hoilett’s cross so nearly found the head of Callum Paterson six yards out.

Philippines international Etheridge pulled off another sensational save from Pereyra’s free-kick on the stroke of half-time to keep City in it at the break.

Mendez-Laing replaced Murphy during the interval, with Hoilett swapping to the left wing to accommodate him.

Watford stamped their control on the match just seven minutes after the restart, as they doubled their lead. Holebas’ shot from 25 yards found the back of the net, with the ball flying just out of Etheridge’s reach.

And they made it three on the 70 minute mark as Quina’s shot from outside the box found the corner.

Cardiff City’s response came ten minutes from time, as Hoilett picked the ball up and found the top corner from range with an incredible strike - with echoes of his effort against Wolves at CCS.

Just two minutes later, Decordova-Reid ramped up the pressure on the Hornets. After Bamba had gone close, the second-half substitute found the net in the midst of a goal-mouth scramble to give City hope of a dramatic turnaround.

With five minutes of injury time at the end of the match, the visitors searched for their third goal. However, despite a valiant attempt, the home defence held firm and the full-time whistle blew.