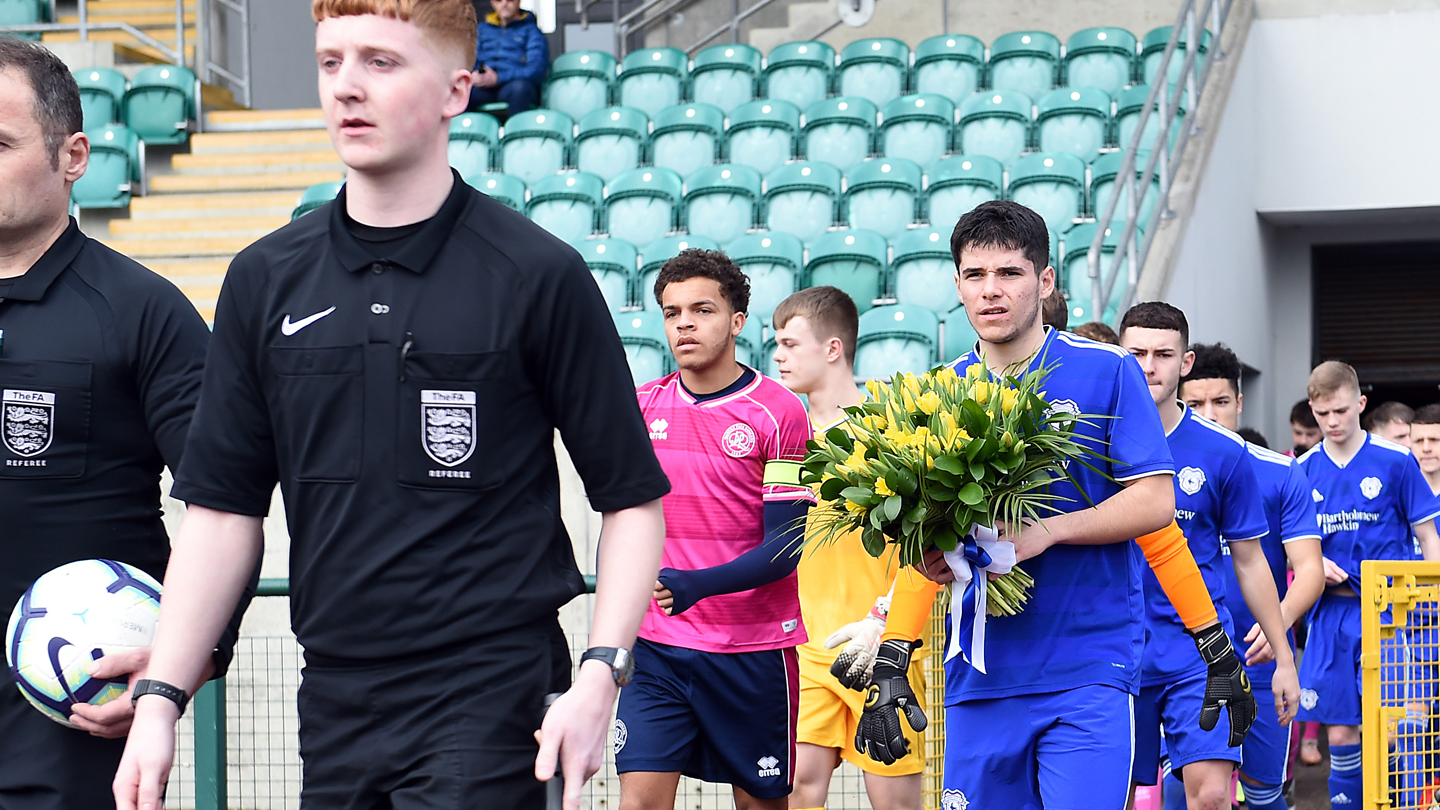 A youthful Cardiff City side produced a performance full of desire at Cardiff International Sports Campus, to maintain their 100% record in 2019.

Before the match, U18 captain Jac Davies laid a wreath of daffodils and tulips as a mark of respect – following the sad events that have unfolded during the past week involving Cardiff City forward Emiliano Sala and pilot David Ibbotson. The thoughts of everyone at Cardiff City FC Academy are with the families of Emiliano and David, and we continue to hope for positive news.

City grew into the game early on, with Siyabonga Ligendza brought down by Joe Gubbings on 11 minutes. The industrious forward seemed to be through on goal, but the opposition defender did enough to prevent Ligendza from taking advantage and the R’s defender received a yellow card for his troubles.

The young Bluebirds would find themselves ahead soon enough though. Connor Davies made a smart run down the right-byline to support Ligendza, before finding Taylor Jones in the box. Jones, who represented Wales’ U16 side in the Victory Shield last year, showed great composure to find the bottom-corner on his right-foot with 20 minutes played.

Jordan Duffey produced an excellent save to prevent Bummi Babajide from drawing the visitors level 14 minutes from half-time. City’s goalkeeper was alert to the danger from Babajide’s curling effort, and acrobatically kept his side ahead going into the break.

Conditions started to worsen at the Cardiff International Sports Campus as the match progressed after the break, but the visitors went close to finding an equaliser on 70 minutes.

Nathan Carlyle attempted to find the back of the net from distance, but his effort was well over. Queen’s Park Rangers looked set to travel back to London with a point, as Kai Douglas levelled up the scores with just ten minutes left to play. Jake Frailing delivered an excellent ball into City’s box and Douglas beat Duffey with a smart finish into the bottom-left corner.

The hosts would show resilience in abundance and were rewarded for their efforts in the final moments of the match. Substitute Cian Ashford finished off an efficient counter-attack after getting on the end of Trystan Jones’ through ball. Ashford showed great technical ability to find an inch-perfect finish on his right-foot from the edge of the area to give the Bluebirds all three points from a tough match.