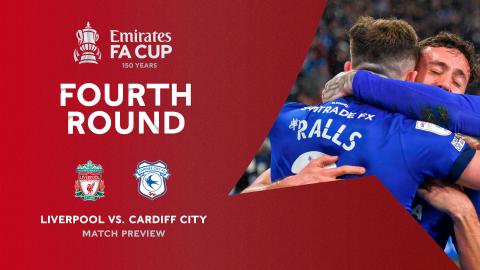 The Bluebirds head to Anfield on Sunday, February 6th, 2022 in Emirates FA Cup Fourth Round action!

This fixture will kick-off at 12pm, with the game being shown live on ITV!

The Reds, managed by Jürgen Klopp, continue to attack on four fronts this season.

As well as Sunday’s Emirates FA Cup involvement against City, Liverpool are currently second in the Premier League and finalists in the Carabao Cup, with a two-legged Champions League clash against Inter Milan to start later this month.

They are unbeaten in 2022, winning four of their six fixtures in all competitions, and drawing against Chelsea and Arsenal. Like the Bluebirds, Liverpool have a packed February, with seven fixtures to be played in the shortest month of the year, finishing with a Wembley trip to face Chelsea for the Carabao Cup.

Sunday evening will see Mo Salah's Egypt face off against Sadio Mané's Senegal in the Africa Cup of Nations final. Neither of the two dangerous wingers will therefore feature against the Bluebirds.

After the aforementioned Salah, Diogo Jota is Liverpool's next top scorer this term with 14 goals in all competitions from 28 matches played.

Addressing the press on Friday morning, Reds boss Klopp confirmed that Harvey Elliott would be in his squad for the visit of Cardiff City. Following a successful season in the Championship in 2020/21, Elliott was welcomed into the Liverpool team at the start of the current campaign, but the 18-year-old has been unavailable for some time due to a serious ankle injury sustained against Leeds United in early September. Elliott is still the youngest player to ever play in the Premier League, making his top flight bow at just 16 years and 30 days old for Fulham against Wolves in May 2019.

In the last round, 17-year-old Kaide Gordon opened his Liverpool account with their first goal against Shrewsbury Town, becoming their youngest ever FA Cup goalscorer in the process. It ended 4-1 in that encounter, with Fabinho (2) and Roberto Firmino finishing off the scoring.

City have loaned a number of players from Liverpool in recent seasons, including Marko Grujić, Sheyi Ojo & Harry Wilson.

Grujić linked up with the Bluebirds for the second half of our 2017/18 season. The midfielder played a key part as City secured promotion, making 14 appearances for the Club. His single City goal came during the victory over Barnsley, netting an impressive long range effort. The 25-year-old is now playing in Portugal with FC Porto.

Ojo and Wilson both arrived for our 2020/21 season. Sheyi played 42 times as a Bluebird, netting five goals throughout the season. Wilson put on a City shirt on 37 occasions and scored seven goals, including a hat-trick against Birmingham City. Ojo is still a Liverpool player, although the 24-year-old is currently out on loan again, with Millwall while Harry left the Reds to sign for Fulham permanently in summer 2021.

The most famous transfer between City and Liverpool so far happened in November 1970 when John Toshack left his boyhood side to join the Reds.

'Tosh' came through at City, signing his first agreement at the age of 16 in 1965. He played over 160 times for the Bluebirds scoring 74 goals, before departing Ninian Park for Merseyside. Toshack spent eight years as a player with Liverpool, winning the top flight on three occasions, the FA Cup, FA Charity Shield, European Cup, two UEFA Cups and a UEFA Super Cup.

ℹ️ Due to ongoing construction work at Anfield, access and arrival routes to the stadium are currently disrupted.