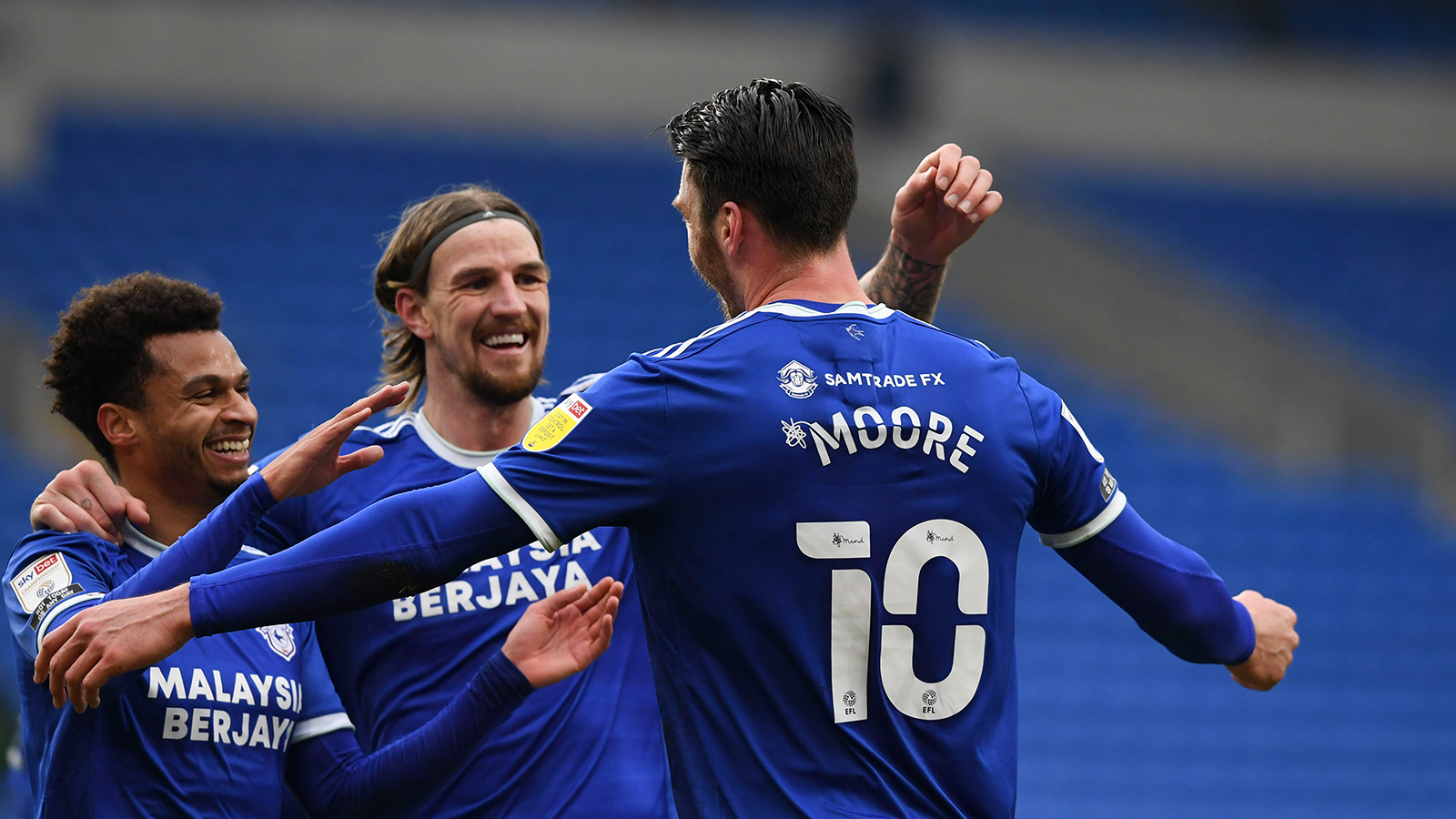 The Bluebirds meet the Rams in midweek action as Derby County travel to the Welsh capital.

Mick McCarthy’s men will take on Wayne Rooney’s side on Tuesday 2nd March with a 7pm kick-off at Cardiff City Stadium. 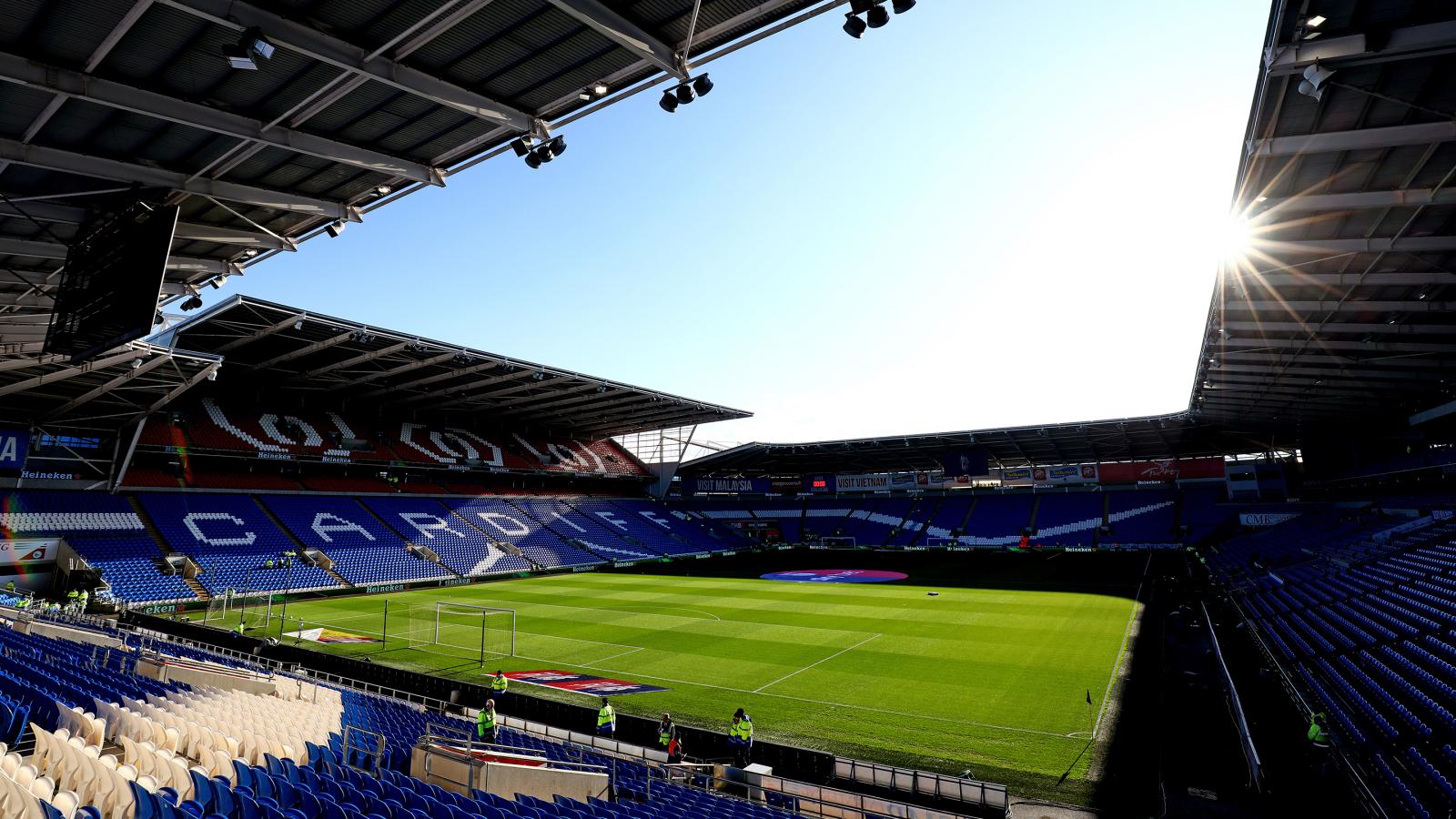 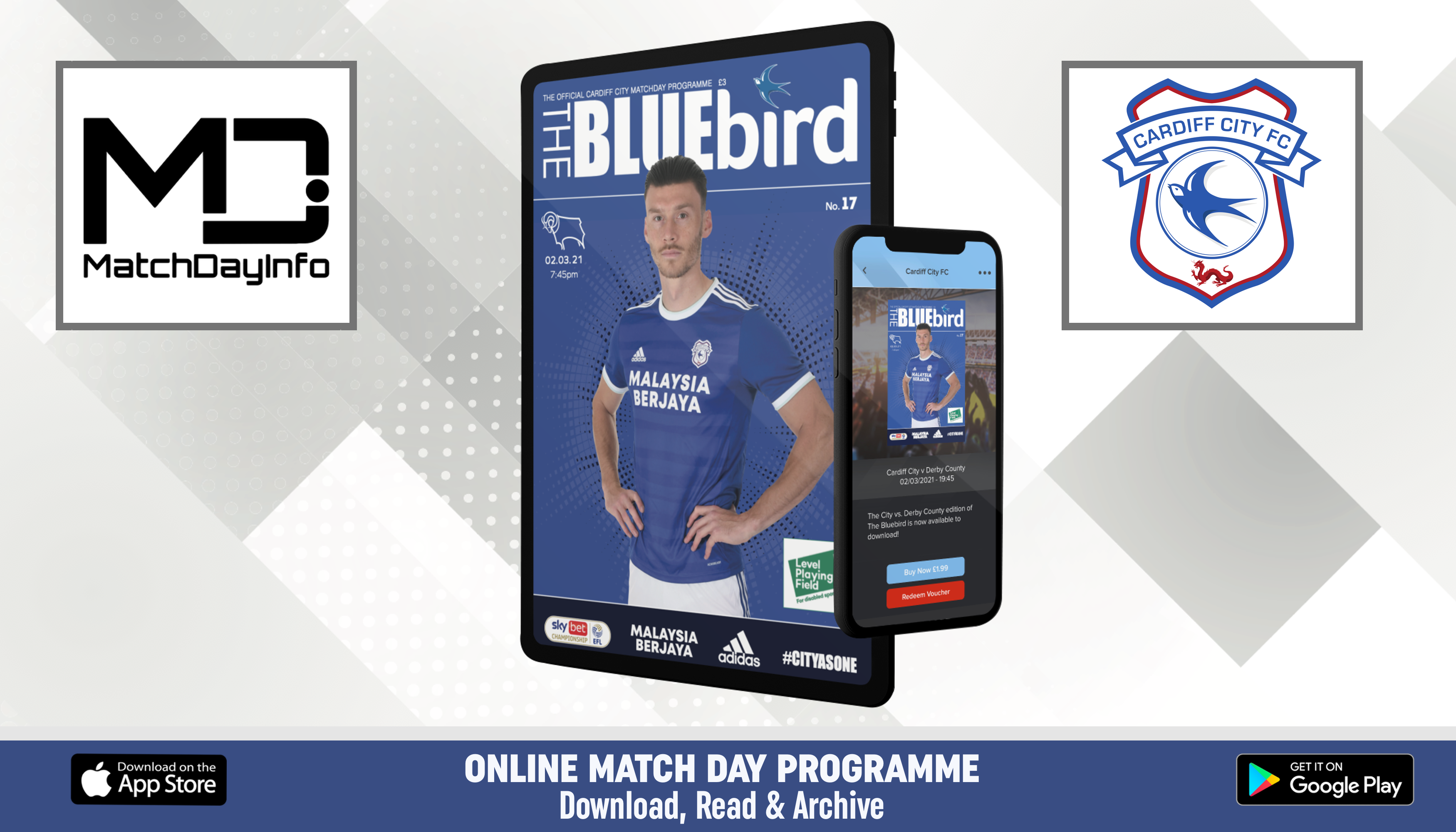 There are two ways to get hold of the Cardiff City vs. Derby County matchday programme.

The Bluebird – edition 17 for 2020/21, featuring Kieffer Moore as cover star and feature interview, can be ordered and delivered in its traditional print format from Cardiff City FC SuperStore. Click here to buy your copy!

Matchday programme bundles are also now available. With your programme subscription, you’ll have each print edition delivered to your door for the rest of the 2020/21 campaign.

You can buy your programme bundle here for just £49, including delivery!

The Bluebird is now available digitally as well as in its traditional print format. The Derby County edition is available to download now! 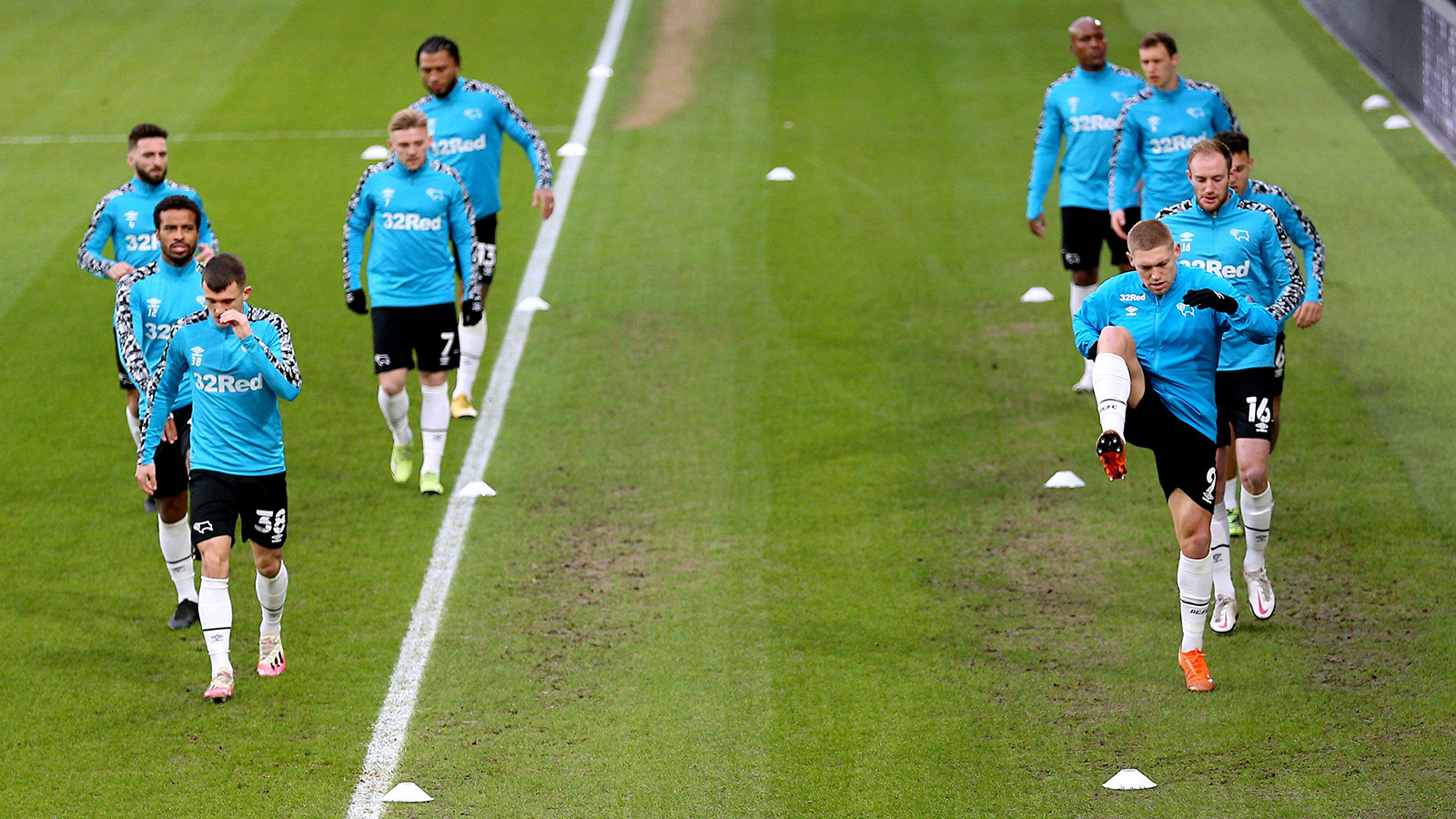 After a tricky start to the campaign, Wayne Rooney’s transition from player-coach to permanent manager at Pride Park has helped the Rams move away from the relegation places. County currently occupy 18th position in the Championship table, with ten wins, eight draws and 14 defeats from their 32 league matches. Derby hold a nine-point lead over 22nd place Rotherham United, and could move as high as 15th with victory in South Wales.

The Rams’ poor beginning to the season, which saw them sitting at the foot of the table for most of November, led to the dismissal of Phillip Cocu on November 14th. Indeed, County have enjoyed a mid-season revival under their new manager, moving out of the drop zone on December 29th and pulling clear of the bottom three in recent weeks. Since Rooney was named as Derby’s permanent boss on November 26th, his side have picked up 32 points, suffering just five Championship defeats.

Derby come into Tuesday’s clash with six victories from their last nine matches. In late January, the Rams recorded three consecutive wins, defeating AFC Bournemouth, Queens Park Rangers and Bristol City, with a 1-0 scoreline in all three games. Defeat to Rotherham United followed, but the Rams returned to winning ways by beating Middlesbrough and Wycombe Wanderers. In their most recent outing, County earned a 1-1 draw with their fierce local rivals, Nottingham Forest. 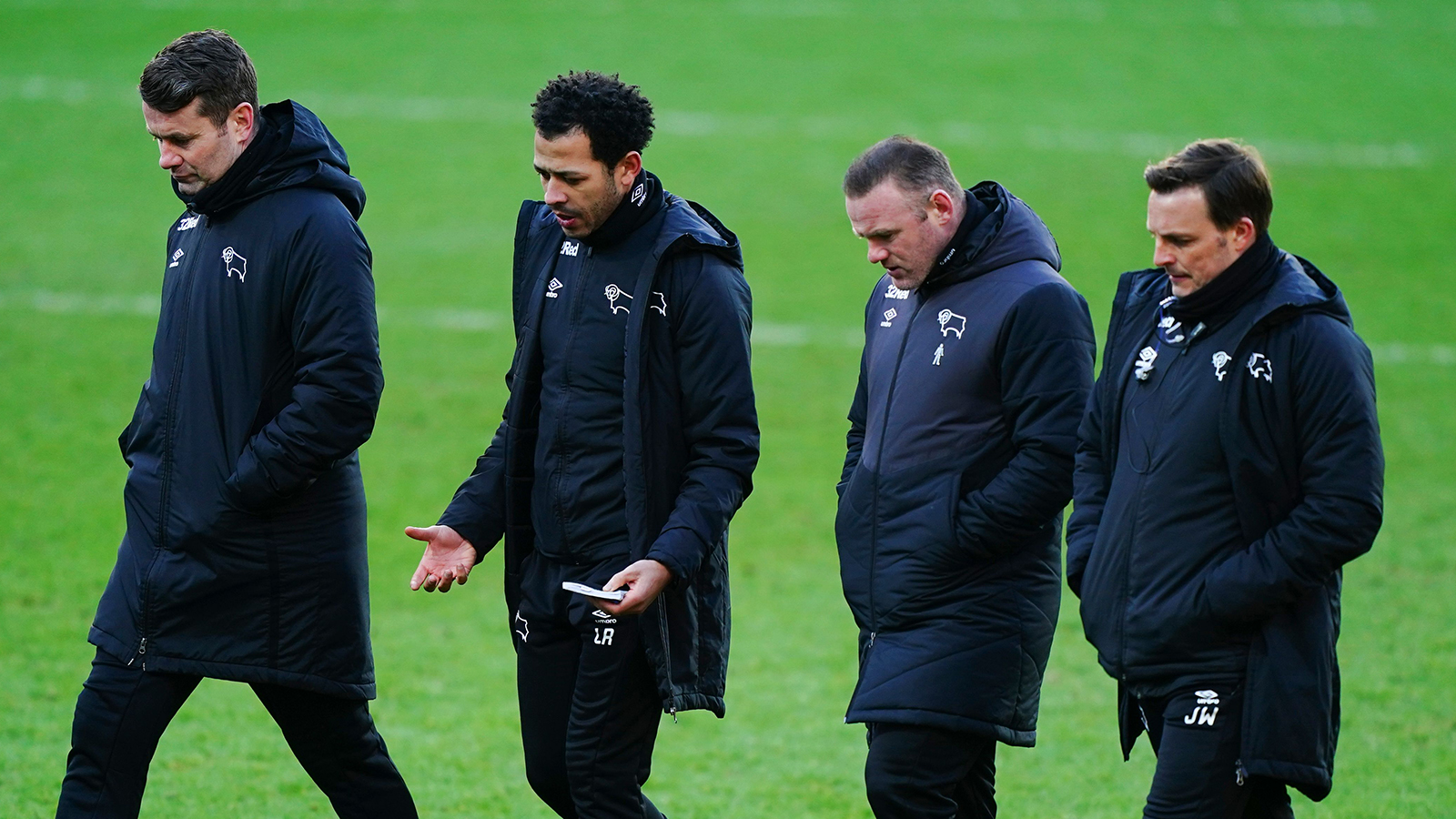 Derby left it late to complete their January transfer dealings, but announced the signing of five new players on Deadline Day. All of Rooney’s new recruits arrived at the club on loan, with the ex-Manchester United and Everton man using his top flight connections to add two players from his former clubs. Defender Teden Mengi signed from the Red Devils, whilst midfielder Beni Baningime joined from the Toffees.

County strengthened their options across the pitch with the acquisition of three additional players. Winger Patrick Roberts, who had been on loan at Middlesbrough from Manchester City, cut short his stay at the Riverside to instead move to Pride Park. Experienced forward Lee Gregory also joined Derby, signing from Stoke City, whilst central defender George Edmundson arrived at the club from Rangers.

Three first team players left the club during the window, with all three signing for Championship rivals. Midfielder Duane Holmes was the first to depart; the United States international signed for Huddersfield Town on January 25th. On Deadline Day, midfielder George Evans signed for Millwall on a permanent deal, whilst promising forward Morgan Whittaker made the move to Swansea City. 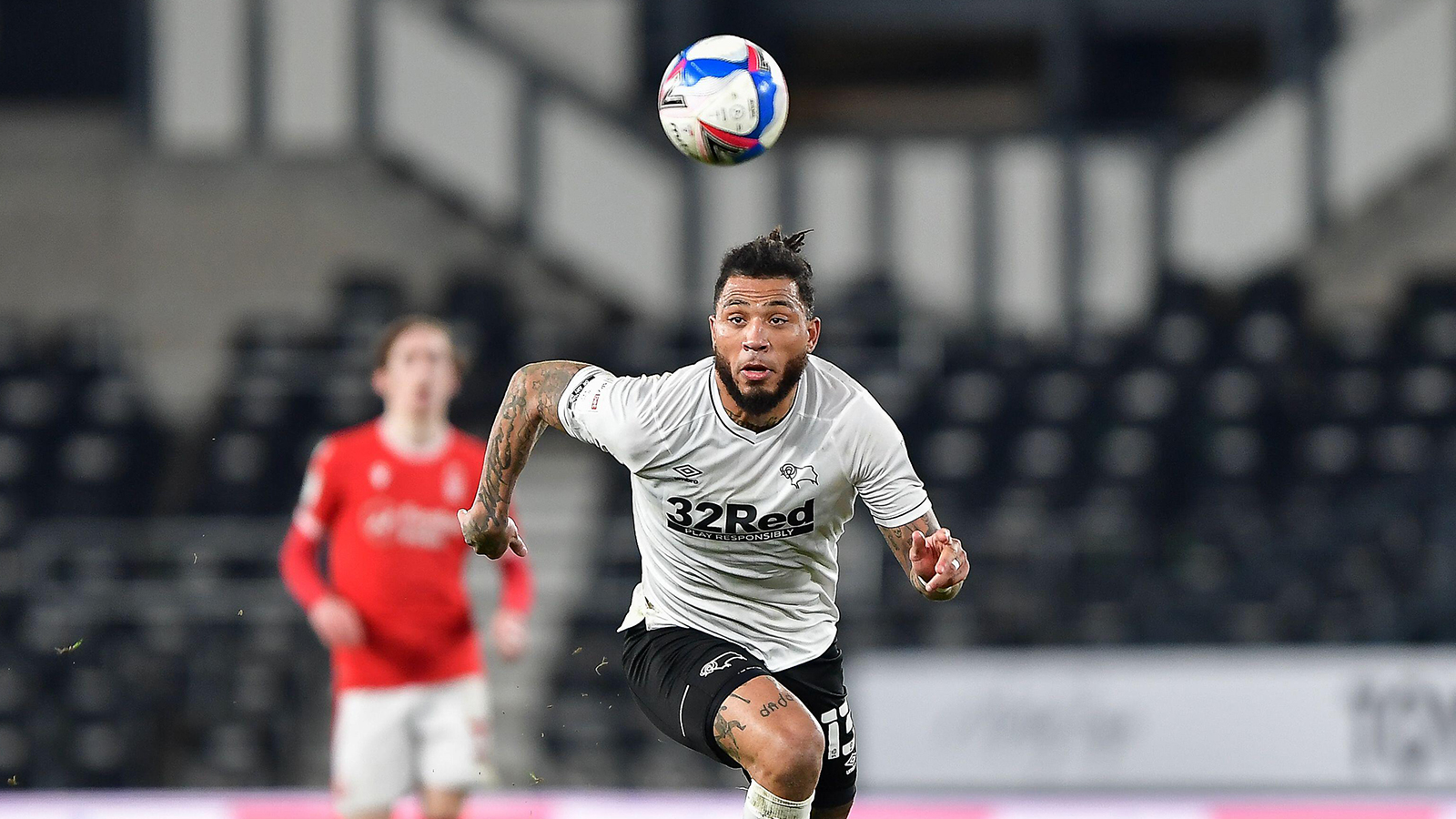 Colin Kazim-Richards unexpectedly arrived at Pride Park late in the summer window, having recently featured in the top flights of Brazilian and Mexican football. However, the 34-year-old has made a seamless transition back into the Championship, and is Derby’s leading scorer for the campaign with seven goals to date. The well-travelled forward, who previously enjoyed spells in the second tier with Brighton & Hove Albion and Blackburn Rovers, has also provided one assist this term and is undoubtedly County’s main attacking threat.

Matthew Clarke re-joined the Rams in August for a second consecutive loan spell from Brighton & Hove Albion. The central defender made 35 league appearances for County during the 2019/20 campaign, and is close to equalling that tally for the current campaign. The 24-year-old has missed just two Championship fixtures all season, and has helped the Rams to record 10 clean sheets in all competitions.

Graeme Shinnie has made 27 league starts for Derby this season, cementing his position at the heart of Wayne Rooney’s midfield. The Scot, who joined the club from Aberdeen in 2019, adds experience to the County lineup, and is often paired alongside either Jason Knight or Max Bird in the middle of the park. Primarily a defensive midfielder, Shinnie has also found the back of the net on two occasions this term, scoring against AFC Bournemouth and Birmingham City earlier in the campaign.