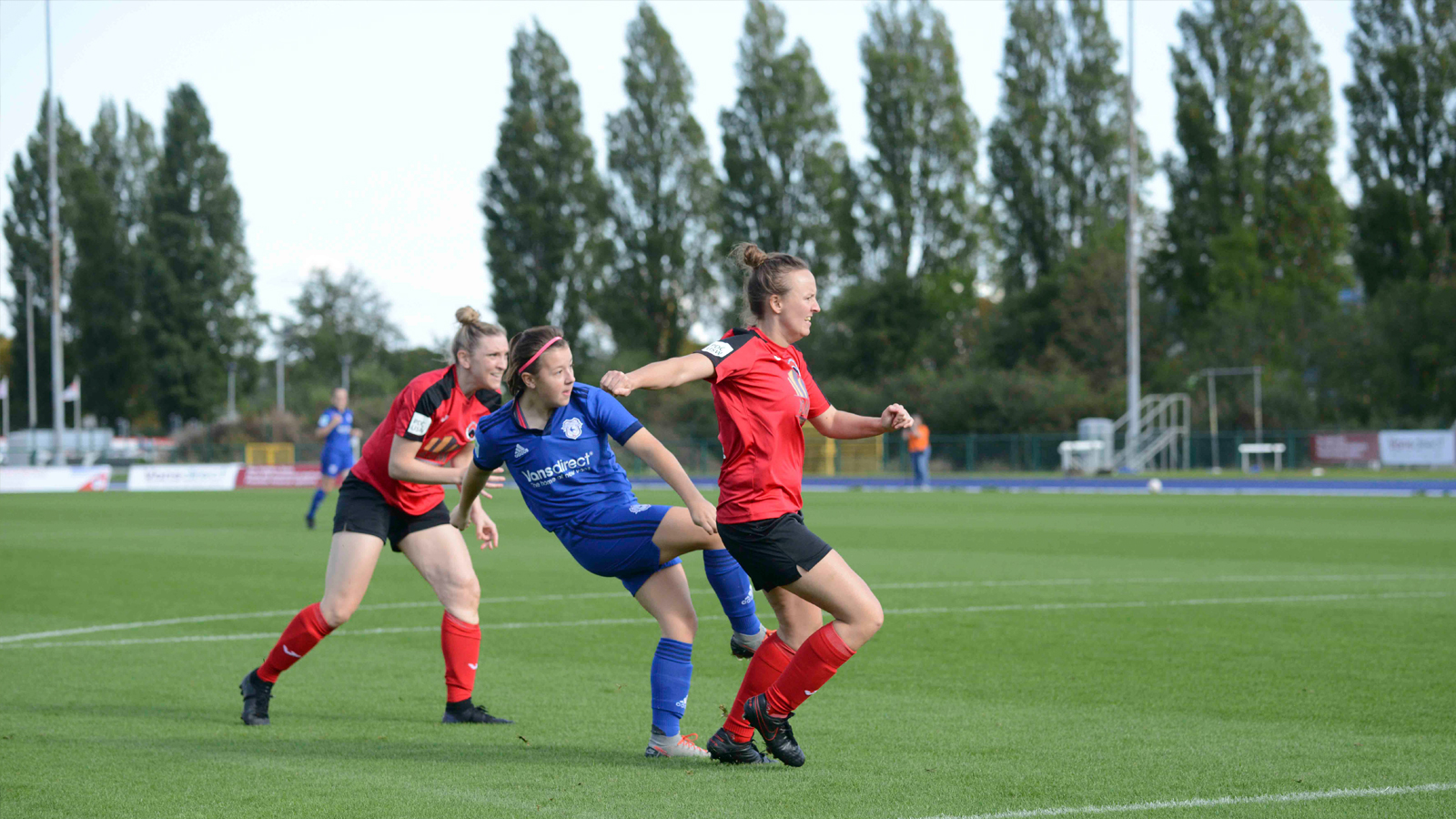 Cardiff City FC Women made it back-to-back league wins on Sunday afternoon with a 2–1 victory over Pontypridd Town at Leckwith Stadium...

A fantastic brace from summer recruit Megan Saunders, netting either side of Niamh Tinman’s first-half equaliser, secured a hard-fought three points for City.

Boss Iain Darbyshire made two changes to the side that claimed a 2-0 win over Barry Town United in midweek, with Zara Mujica and Sophie Norman coming into the starting XI.

The Bluebirds started brightly and were rewarded for doing so, taking the lead in the third minute. Danielle Green’s low cross from the right found Saunders, who netted against her former club to give City an early advantage. A second goal came close soon after, as Ffion Price’s cross was flicked onto Lily Billingham, who couldn’t quite convert at the back post.

Pontypridd Town responded and equalised in the 15th minute, as a low cross was finished into the bottom corner by Tinman. Fern Burrage-Male’s side went close to taking the lead through Alison Witts, only to be denied by a fantastic goal-saving block from Price.

City almost re-gained the lead before half-time, as Green’s dangerous delivery from the left was latched onto by Danielle Broadhurst, but the midfielder couldn’t quite connect with the ball, ensuring that the scores were level at the break.

The Bluebirds began the second period on the front foot and went close to a second goal through Billingham, who curled wide from inside the box. Darbyshire’s side continued to push for the lead, as midfielder Norman struck narrowly over with a fantastic effort from distance.

City found the breakthrough in the 65th minute in some style, as Saunders picked up the ball and struck a superb effort from distance past goalkeeper Maisie Jones to restore the Bluebirds’ lead and net her third goal since signing for the club this summer.

Pontypridd went close to levelling the scores through Witts, who cut inside and struck onto the woodwork. City responded by creating chances of their own however, with Broadhurst firing narrowly wide from the edge of the box after more great work from Saunders. Green also found space to strike at goal, forcing a good save out of Jones.

In the final minutes, Bluebirds goalkeeper Mujica pulled off a fantastic save, denying Renee Day in a one-on-one situation to keep the lead intact and secure a valuable three points for City.

It’s FAW Welsh Women’s Cup action up next for the Bluebirds, as City travel to Park Hall to face The New Saints.

“Lots of credit to Pontypridd," began Iain. "They pressed us really high, they’re shape caused us a lot of problems. It was a difficult first-half for us, where we didn’t get going at all. We got an early goal, but we didn’t do much after that.

“It’s exciting that we have more challengers in the league and that we have teams that will come here and test us. We have to dig really deep for that, but we got the result.”

Commenting on Megan Saunders’ brace, Darbyshire said: “She’s been fantastic. When she first came to train with us, we could see that there was ability there.

“At the time, we had a big attacking core, but we decided that Meg was the player we wanted to go for and she’s been paying us off week by week.

“She’s improving her fitness and learning all the time. She’s also a great character and has a great personality for the dressing room. We’re delighted to have her.”

Giles pre-Swansea | It's important for everybody

Sky Bet EFL Rewards | A signed City shirt has to be won this matchday!