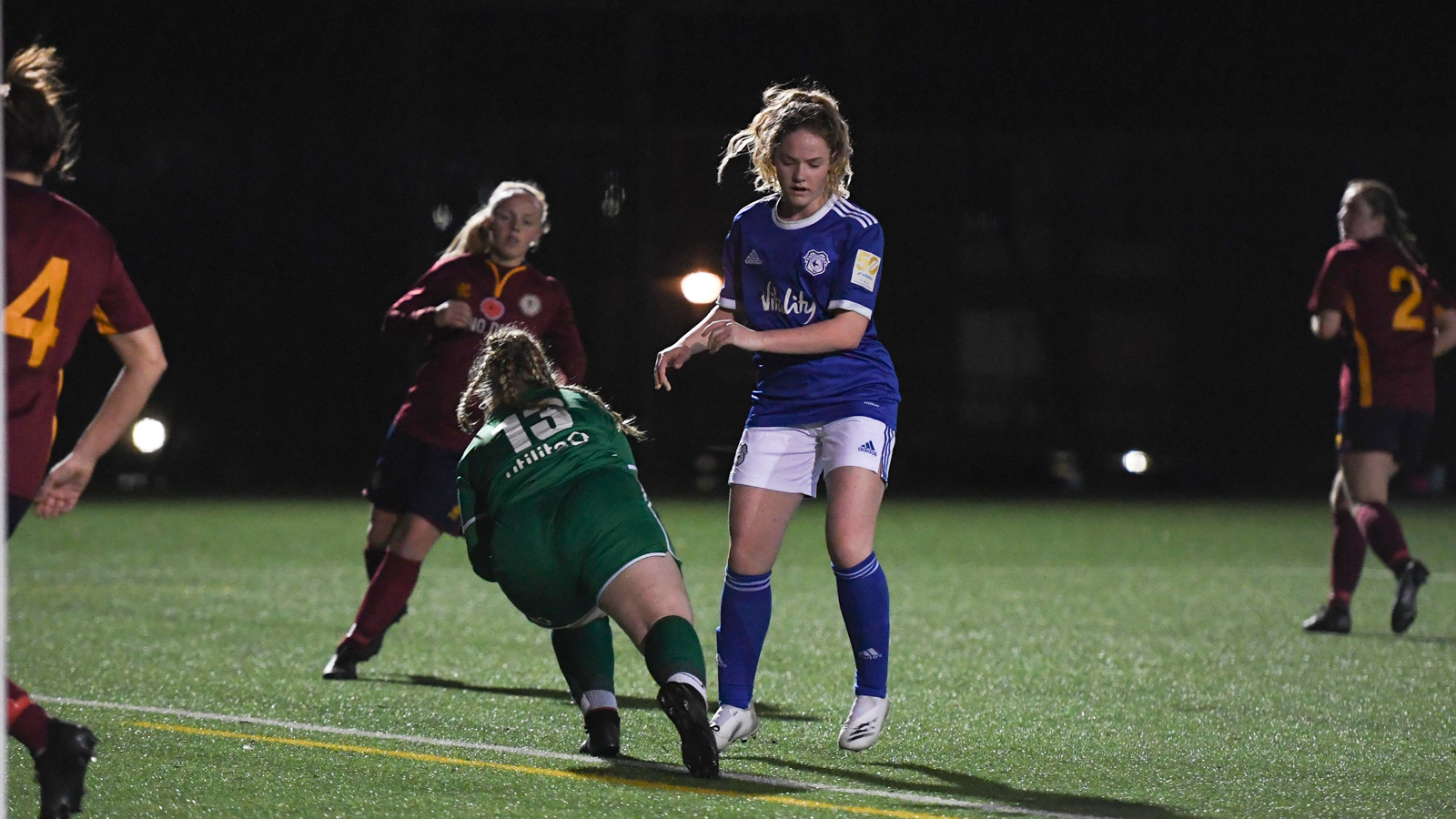 Cardiff City FC Women battled it out in a thrilling 2-2 draw against the Archers on Thursday night, twice taking the lead under the floodlights in Leckwith.

Iain Darbyshire made two changes to the side that started against Port Talbot Town on Sunday, with Ffion Price and Phoebie Poole making their way into the starting eleven.

The opening stages of play saw both sides compete for early pressure, with much of the action taking place in the middle of the park. With both hosts and visitors finding a foothold, play was tense as the match progressed past the early exchanges.

City's first real chance of the evening came 25 minutes in as Kanisha Underdown's header fell to Siobhan Walsh inside the Archers' area. Striking with her left foot, her effort went just wide of the near post, however.

Amy Long's shot from the edge of City's area was the response from the visitors five minute from the interval, but it drifted wide of the left upright.

Phoebe Poole picked up a terrific through ball moments later at the other end and unleashed a shot from the right, though it flew narrowly wide across the face of goal. Heading into half-time goalless, the match promised much more to come following the interval...

With the second half looking to begin in a similar fashion to the first, Poole broke the deadlock in the 48th minute of play with a terrific strike from the edge of the area. Lisa Owen placed her through ball perfectly from deep in City's half, which Poole latched onto effortlessly in the final third. Taking the ball forward in her stride and free of her marker, the forward beat the 'keeper from a difficult angle off her right foot, putting City ahead.

Following more pressure by the hosts, Grace Corne equalised five minutes later against the run of play. Volleying from a high cross, the Archers' number 8 arched the ball over the reach of Ceryn Chamberlain, who had replaced Charlotte Hastings at half-time.

With momentum running in the visitors' favour, Hannah Daley shone in the middle of City's back four, intercepting and clearing constantly to keep the visitors from taking the lead.

Jasmine Simpson's pressure on the Archers' defence paid off on the hour mark, as a misplaced pass back towards Charlotte Smith found its way into the back of the net. Simpson had the chance to double the reestablished lead two minutes later, but two shots were well handled by the 'keeper, who made amends for her earlier mistake.

Again the Archers pressed in the following minutes, and despite a terrific blocked shot by Daley, the visitors eventually found another equaliser, this time through Ellie Preese.

With little more than ten minutes left on the clock, strong calls for a penalty-kick in the Bluebirds' favour were swiftly waved away by the referee after Poole was taken down abruptly inside the visitors' area. Denied despite their claim, City were forced to continue in their efforts to once again take the lead.

The final ten minutes were as exciting as the rest of the encounter, though they yielded no further goals for either side. With the visitors pressing high and whipping in dangerous crosses in an effort to beat City in the air, the hosts responded well by utilising Simpson and Poole's pace on the counter, making crucial runs up the pitch as they played the ball to feet.

With the final whistle blown in Leckwith, both sides were forced to settle for a point. With the amount of grit and determination shown by City throughout an intense 90 minutes, nobody can deny that it was a point well earned as the Bluebirds continued their WPWL campaign.