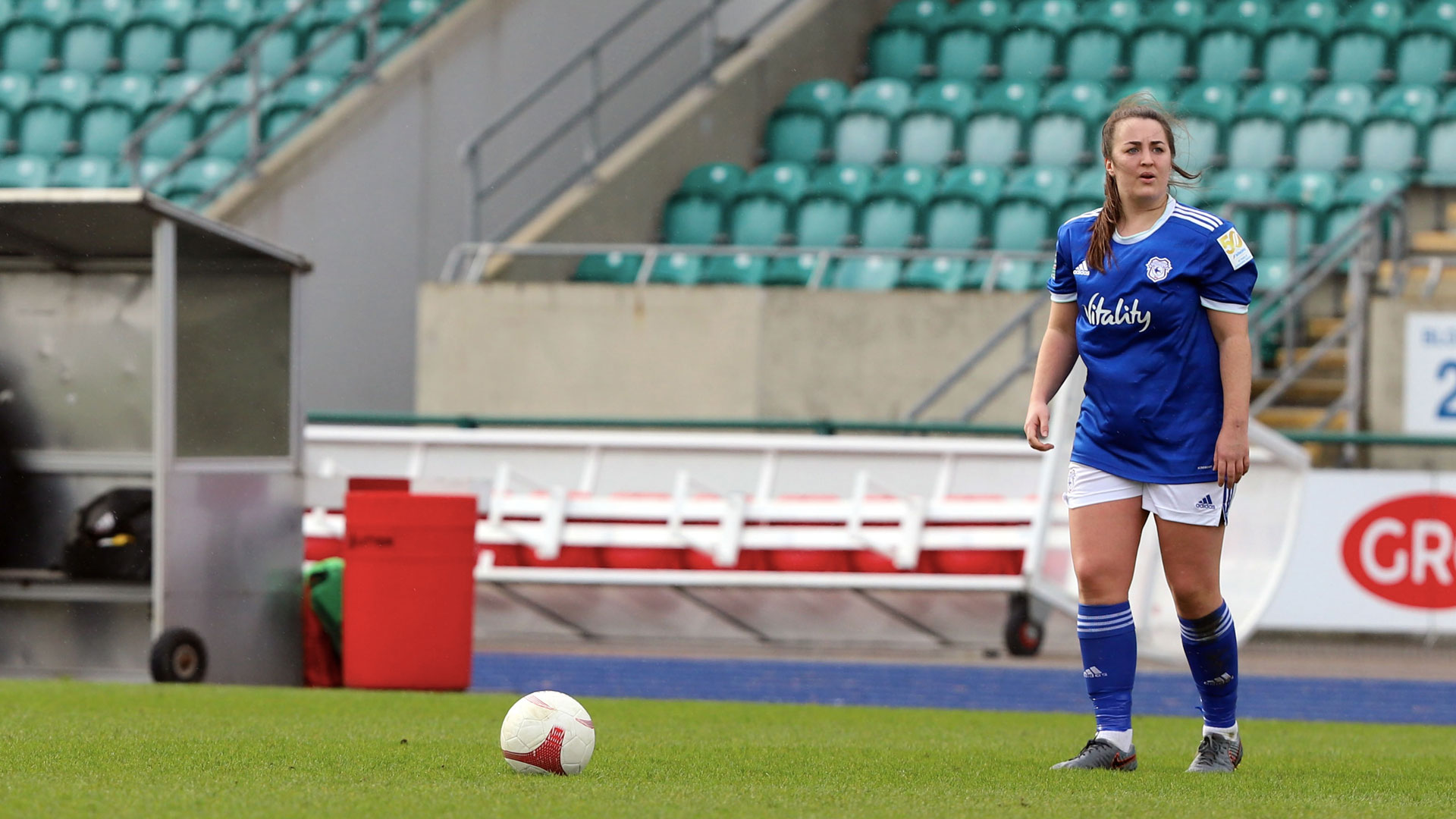 Head Coach Iain Darbyshire made four changes to the side that faced Abergavenny last time out with Ellie Jones, Kanisha Underdown, Danielle Broadhurst & Jasmine Simpson coming in to the starting XI.

The Bluebirds controlled the flow of the match from the opening but found themselves one goal behind from a penalty. Jones punished for an alleged foul after a shot had taken place. Lauren Amor slotted home the spot kick, to give her side the lead after 17 minutes, against the run of play.

The hosts had a fine spell with the ball after scoring - but City grew back in to the match. It was a real battle of two competitive teams at Victoria Road.

A deserved equaliser came after 40 minutes. Forward Jasmine Simpson was slipped through on goal. Instead of shooting, she beat the 'keeper by passing to her strike partner Catherine Walsh, who made no mistake, sending the ball into the empty net.

City made a change at the interval, with the booked Jones replaced by Sophie Norman for the second period.

Laura-May Walkley's flicked header went close for Port Talbot with 59 minutes gone, but the hosts were punished for this miss one minute later as the Bluebirds took the lead for the first time.

Simpson had seen two efforts go wide in the first half, but she wasn't to be denied her goal. It was a lovely finish from Jasmine after an hour, which was followed by some big celebrations with her teammates.

Bethan Lloyd went close to levelling the match again three minutes later, but her free kick from 25-yards crashed wide off the post.

Darbyshire introduced top scorer Phoebie Poole after 71 minutes, and she made a real impact. The forward saw a deflected effort drift wide - before netting nine minutes after entering the game. Poole ran clear, and her shot was too strong for Vicky Beddows, with the ball rolling over the line despite the touch from the 'keeper.

Rather than resting on their two-goal lead - the Bluebirds attacked, and added two further goals late on. Simpson scoring her second of the game in style with an exquisite lob, before Poole made it a double, with a brilliant close range strike. City bouncing back in style with this impressive away win.

Head Coach Iain Darbyshire spoke to cardiffcityfc.co.uk after the match.

“We’re proud of the girls and how they responded to last week," Iain began. “We know we’re good enough. We’ve got that ability. But it is about getting into that psychological mindset of knowing that teams are going to come, they’re going to batter us, they’re going to be physical and we just need to stand up to it and our quality will shine through.

“That’s what happened today. That was difficult, especially with the penalty decision as well. We could’ve gone into our shell. But, we bounced back, and they battled so hard. They deserved the rewards they got at the end of the game."

He added: “We were clinical today. We made a slight adjustment at half-time. I felt the final ball was letting us down. It was about putting the ball in the right areas and letting the forwards do their jobs. All three of our strikers involved today scored, which is always great. We were effective, we battled and we handled the game well.

“We also had that bit of class when we needed it and it’ll give us motivation to do that again moving forward."

With injuries and suspensions to members of the squad, Darbyshire was forced to play a few of the team out of position at Port Talbot. He continued: “We’ve got a very good squad and a group of players that love to play for Cardiff City. If that involves playing in a different position and playing 90 minutes then they’re happy to do that.

“Hannah Daley played left-back today. I don’t think she’s ever played there in her career. We had Zoe (Atkins) wide in the midfield, and she did fantastic.

“I could reel off every name, because they were all great today as the game went on. It was great to see young Brooke (Evans) come on too.

“We had a game plan today, and it went pretty much how we thought it was going to. It is always great to have some wonderful goals. A bit of a highlight reel.

“The girls came off the pitch buzzing, with that hunger and enjoyment back and that was just what we needed.”