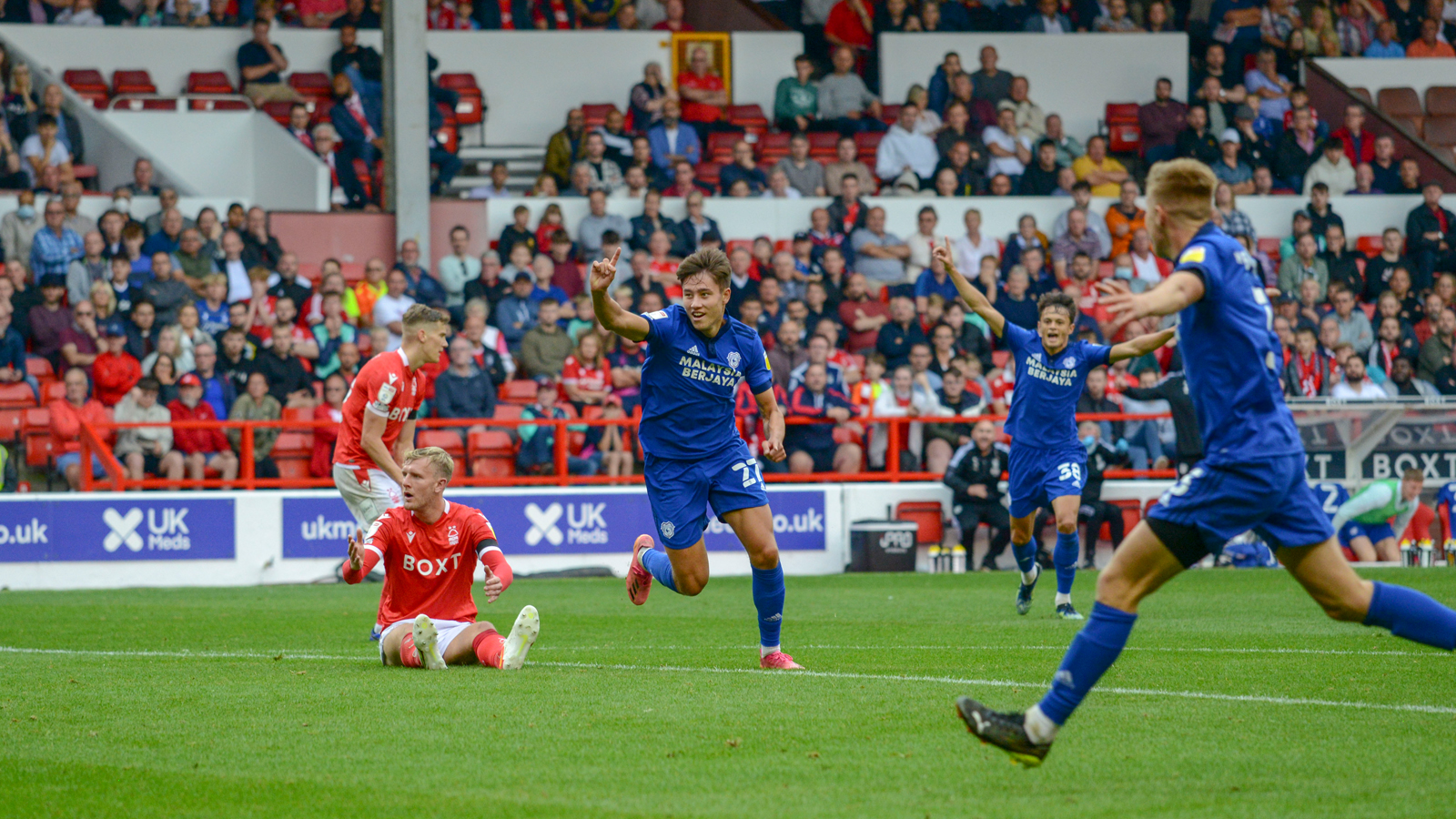 Rubin Colwill bagged a second-half brace as the Bluebirds came from behind to beat Nottingham Forest at the City Ground on Sunday afternoon.

Returning to league action after a two-week break for international action, Mick McCarthy handed a Championship debut to young midfielder Sam Bowen, who was named in the starting eleven after a last-minute injury to Leandro Bacuna.

The Bluebirds started on the front foot in Nottinghamshire, and went close to an opener after just five minutes. Joel Bagan got onto the end of a cross at the back post, sending a looping header up and over Brice Samba in the Forest goal. The left-back was unfortunate to see the ball bounce down onto the top of the crossbar, with Joe Worrall able to clear before the ball reached his goal line.

However, the hosts made the breakthrough with their first real opportunity of the afternoon, finding the back of the net after 23 minutes. Chris Hughton’s side moved the ball down the left-flank, with new recruit Max Lowe cutting the ball back into the penalty area. Lewis Grabban was in the right place at the right time, beating Dillon Phillips with the aid of a slight deflection off Curtis Nelson.

City pushed for a leveller in the final minutes of the first half, with Mark Harris going closest. The Welsh international latched onto Will Vaulks’ ball, heading wide of the target, with James Collins himself narrowly unable to get a final touch on the ball at the back post.

McCarthy’s men showed far brighter attacking intent in the second period, with a fine move on the right flank four minutes after the interval. Linking up with Harris, Perry Ng drove forward and slipped the ball to Collins inside the area, though the striker’s low shot was well-saved at the near post by Samba.

Kieffer Moore and Rubin Colwill were introduced to the action after 56 minutes, and the Welsh duo took little time to make their mark. Just 53 seconds after their introduction, it was Colwill who fired home a deserved equaliser, netting his first senior goal. From a Vaulks cross, Moore’s header bounced back off Flint and into the path of Colwill, who scooped the ball into the bottom corner on the turn to level the scores.

The Bluebirds dominated the fixture after Colwill’s strike, enjoying a flurry of chances just after the hour mark. Firstly, after Sean Morrison had beaten Samba to a high ball, Harris was unfortunate to turn the ball over the crossbar on the volley. Minutes later, another ball into the box found the head of the unmarked Kieffer Moore; the striker applied an excellent low header, which agonisingly clipped the foot of the post. Minutes later, Aden Flint went close to extending his fine goalscoring start to the season, with a strong header forcing Samba into a two-handed save.

Forest managed to weather the City storm and regain possession, though the Bluebirds turned the result on its head with a fine goal on the counter attack. Moore produced an excellent flick to knock the ball to Colwill, who advanced towards the edge of the Forest area. With defenders approaching, the 19-year-old curled the ball into the far corner for his second of the afternoon, sparking scenes of wild celebration amongst the travelling fans behind the goal.

Having endured a quiet second half, Dillon Phillips was called into action on several occasions in the final fifteen minutes of the match. After Ng was adjudged to have brought down James Garner, City stopper Phillips was able to tip the loanee’s free-kick onto the crossbar and out to safety. Moments later, Joe Lolley saw his low drive parried away by the Bluebirds’ number one, with Jerry Yates also forcing Phillips into a two-handed block with a few minutes remaining.

The Bluebirds backline was able to hold firm and prevent the hosts from finding an equaliser, with the full-time whistle maintaining City’s unbeaten start to the season away from home. Next up for McCarthy’s men is a trip to Coventry City on Wednesday, September 15th, with a 7:45pm kick-off in the West Midlands.