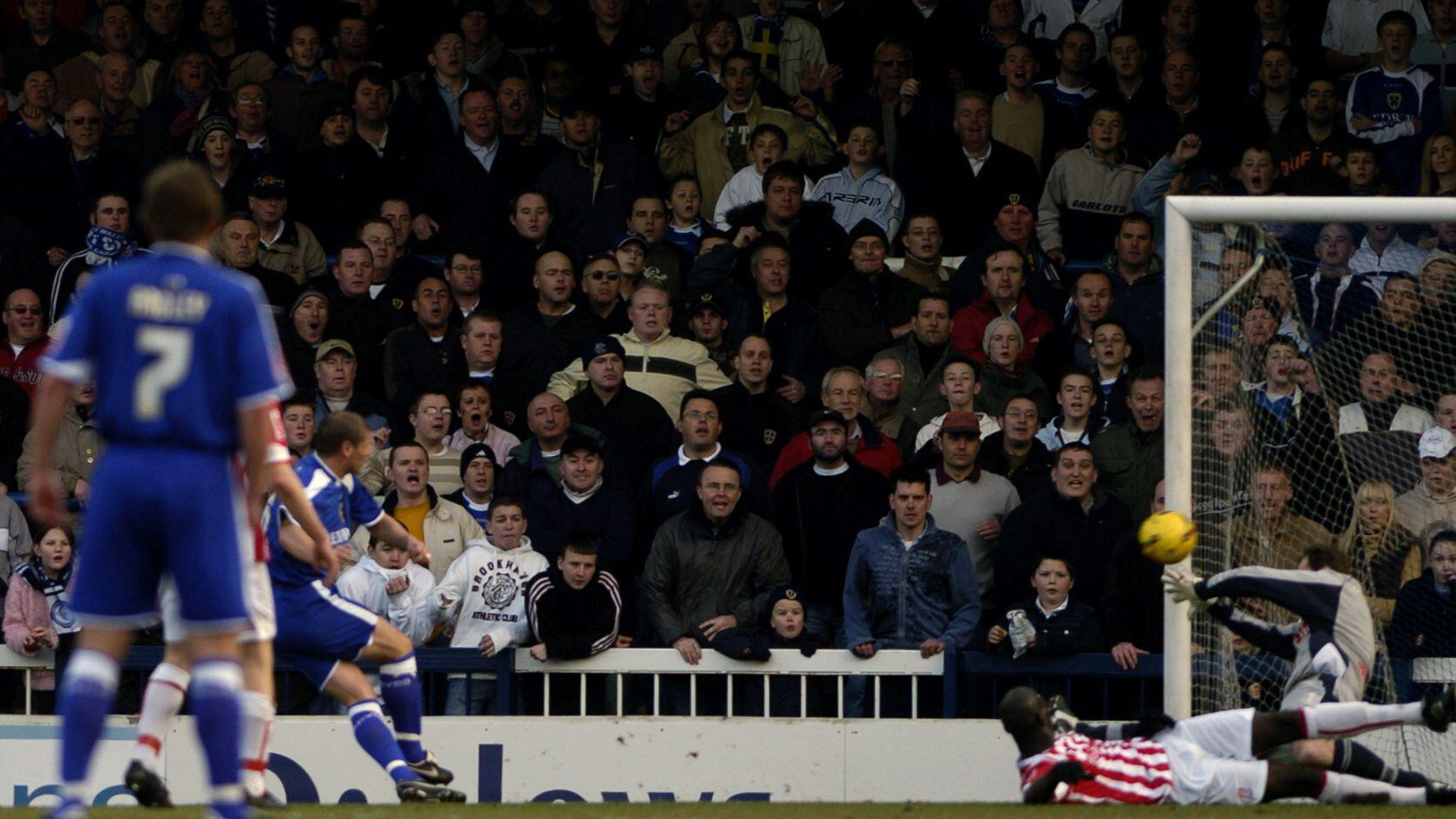 Ahead of Tuesday's meeting with the Potters, we recall connections from the shared pasts between City and Stoke.

Cox bags a brace and soldiers on

Cardiff City secured a league double over Stoke City in the 2005/06 season, both times defeating Tuesday's opposition 3-0 during that campaign.

In their first meeting at the Britannia Stadium in September 2005, regular goalscorer Cameron Jerome bagged a brace alongside skipper Darren Purse's effort, earning three points away from home as the Bluebirds made it six matches unbeaten.

Later on in the campaign, with City recently defeated by fellow promotion-chasers Crystal Palace, the Bluebirds took the opportunity to bounce back with a return to Ninian Park on February 11th, 2006, though the goalscorers on that afternoon were far from the usual suspects.

The hosts took the lead in the 18th minute of play through midfielder Kevin Cooper. Having joined from Wolverhampton Wanderers in the previous summer, Cooper had soon become a regular starter for City, playing in the middle of the park alongside Neal Ardley, Willie Boland and Joe Ledley.

Pressing up the field in possession, the midfielder cut inside from the right wing before unleashing a shot from a tight angle at the edge of Stoke's area. The ball soared towards goal at such a speed that it caught 'keeper Steven Simonsen off guard and unable to intercede as Cooper's effort flew in at the top left corner, breaking the deadlock in sensational style. 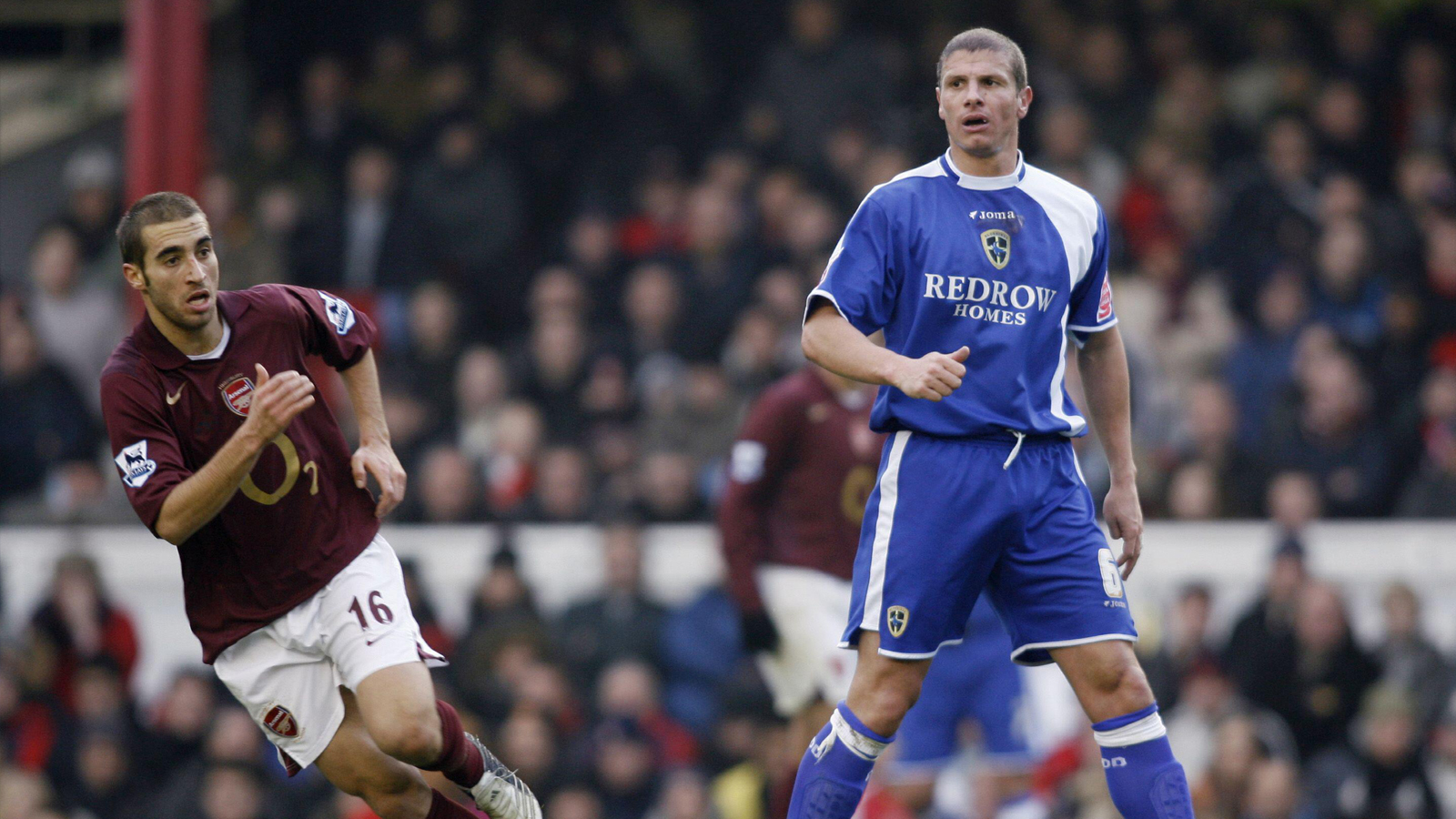 Neil Cox featured for the full 90 minutes against Arsenal in an FA Cup tie in January 2006, as the two clubs met for the first time since 1982.

Defender Neil Cox would double City's lead at the half-hour mark, with Cooper this time providing the assist from a well-placed corner-kick. Finding Cox unmarked inside Stoke's area, the summer signing struck home from six yards, getting his name on the scoresheet for the first time in a City shirt.

Going in 2-0 up at half-time, City would go on to add another in the second half, when with little more than 20 minutes remaining, Cox scored another. Positioned inside the area once more, the defender rose the highest to meet Ardley's cross, heading home to conclude the scoring that afternoon.

Having combined to put City three to the good, the pair worked tirelessly alongside their teammates to see out the victory, with a clean sheet to boot despite the late pressure applied by Icelandic international striker Hannes Sigurdsson.

Speaking the following week, Cooper said of his goal of the season-contender: "When the opportunity came on Saturday, I thought I'd hit it. There wasn't really anything else on, the angle wasn't right for a cross and I was absolutely delighted to see it go in the top corner."

Cox revealed post-match that he was also harbouring quite the injury, but had soldiered on to score the two goals for his side: "I banged my shoulder and now there's a little bit of bone sticking out of it, that's all I know, the physio knows a bit more.

"I've seen a specialist, I'm alright, just got to get on with it. I did used to strap it up before a game, but I was in too much agony afterwards."

Ironically, Cox had in fact replaced teammate Glenn Loovens in the starting lineup due to injury, only to pick one up himself:

"You get your opportunity and you've got to take it, and that's what's happened, it's disappointing for Glenn as he's had a good season, but everyone's got to play for their places."

Carrying on despite his injury, Cox continued to play for the Bluebirds only days later against Luton Town, playing for the full 90 minutes in a 3-3 draw at Kenilworth Road. Making 27 league appearances that for City season, he departed for Crewe Alexandra in time for the following campaign, with those two goals scored against the Potters also under his belt.

A Trinidadian international, Kenwyne Jones enjoyed two stints playing for Stoke City, where he made a total of 101 league appearances for the club. Following an introduction to playing in the Football League in 2004 with a transfer to Southampton, the striker went on loan to the Britannia Stadium in February 2004, where he scored three times from 13 Championship appearances.

Playing for Southampton in the Championship for the following two seasons, a move to Sunderland saw the striker become a Premier League regular between 2007-2010, scoring 24 goals for the Black Cats across the span of three campaigns, being named the club's Player of the Year in 2008.

Signing permanently for the Potters in 2010, Jones was the joint top-scorer in all competitions during his first full season with the club, netting 12 times alongside teammate Jonathan Walters. Among his accomplishments that year, the striker helped his side to the 2011 FA Cup Final, where he started in a 1-0 defeat against Manchester City.

Remaining with Stoke City until halfway through the 2013/14 season, Jones subsequently made the transfer to play for Cardiff City. The striker had a dream start to his time as a Bluebird, netting the winner against Norwich City 50 minutes into his debut appearance at Cardiff City Stadium, having gone behind in the first half in the Premier League fixture.

Following his debut, Kenwyne said: "The team was naturally a bit down after they scored, but we showed great character and belief to come out in the second half and do the business. It was important to us to come out here and lift the crowd and get the three points.

"I'm happy for myself personally for scoring, first of all to be playing football again, and again I can't explain how happy I am.

"It was a pretty easy decision for me to come here. You want to play football. There's not much fun about sitting on the bench, you want to be back out there playing and I was delighted to make my debut."

The following season, Kenwyne became City's top scorer, finding the back of the net 13 times in all competitions from 36 appearances, also scoring once for AFC Bournemouth whilst on loan with the Cherries for the closing months of the 2014/15 campaign.

Departing South Wales in 2016 after three seasons and 64 league appearances, Jones would later make 17 appearances for Major League Soccer club Atlanta United, before later retiring in 2017. With almost 500 appearances in all competitions at club level across a 15 year career, Kenwyne had also represented his country 82 times on the international stage, scoring 23 goals.

Dwyer and Sayer start a streak

Competing in the Second Division in the 1977/78 season, Cardiff City would go up against Stoke City for their first shared league fixture in 14 years.

With only one win from their previous five matches, a return to winning ways was desired against the recently relegated Potters as the two sides met at Ninian Park on November 5th, 1977.

Phil Dwyer's opener was his third of the campaign, as the defender broke the deadlock in the 42nd minute of play. Having taken the lead, Peter Sayer doubled it on the hour mark, with the winger picking up his first of the campaign.

The final whistle marked City's first home victory against the Potters since 1958, and would mark the start of a scoring streak for Sayers in particular.

While Dwyer went on to score alongside Sayer at their next home match against Burnley a week later, Cardiff-born winger Sayer went on a run of three goals from as many matches, with a third goal scored against Hull City in the days following.

With 39 league appearances made that campaign, Dwyer's six goal tally by the end of the season was only four short of top goalscorer John Buchanan, who had achieved the feat for his third consecutive season.

Additionally, having made just over 200 appearances for City since starting out as a teenager in 1972, the defender's goal against the Potters marked his 20th in a City shirt. Still less than half-way through his time spent at Ninian Park, however, Dwyer would score another 21 league goals for City in the next seven years. He remains to this day behind only Billy Hardy on total amount of appearances for the Club, achieving the feat in a much shorter amount of time.

Remaining in the division at the end of the campaign by finishing one point above the dropzone, the result against Stoke proved to be vital for the Bluebirds.

The victory would be City's last against the Potters for 25 years. Meeting once again at Ninian Park in January 2002, an own-goal from Bjarni Gudjonsson and Andy Legg's strike put an end to the Bluebirds' winless streak against Stoke, with City only losing on three occasions at home throughout that entire league campaign.