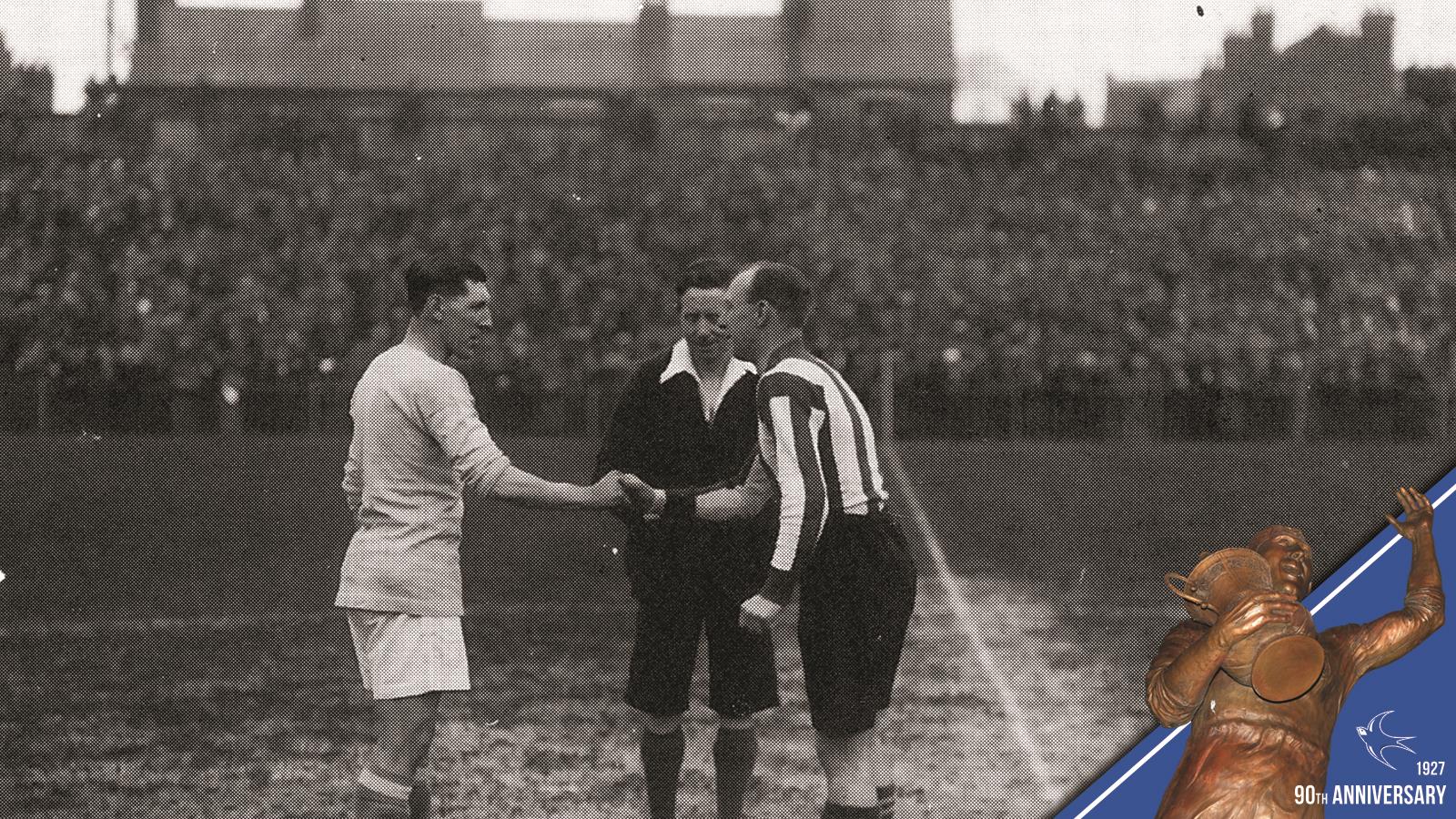 90 YEARS - THE ROAD TO VICTORY

The Bluebirds reached Wembley the hard way in 1927...

Ninety years ago this Sunday, Fred Keenor and his gallant team-mates achieved the unthinkable by bringing the FA Cup out of England and back to the capital city of Wales.
It wasn’t an easy ride though, with the Bluebirds having some tough opponents en route to their defining triumph.
With Ninian Park hosting just two of the six FA Cup fixtures, City had win the prestigious trophy the hard way…
‘ONLY TWO AT HOME’
The Bluebirds’ Cup run began on January 8th 1927 as they defeated Eric Hughton’s Aston Villa 2-1 in front of 31,000 supporters at Ninian Park at the Third Round stage.
With Villa tipped as the favourites, Manager/Secretary Fred Stewart and his City side had a huge task ahead of them; however, they took the lack of expectation in their stride and found themselves two goals ahead.
Striker Len Davies and midfielder Ernie Curtis fired the Bluebirds into the Fourth Round despite a late own goal from goalkeeper Tom Farquharson. The ’27 heroes were on their way.
VICTORIES OVER DARLINGTON & BOLTON
Following that win over Villa, City were drawn to play on January 29th at Darlington (who now ply their trade in the Vanarama Conference North after being re-founded as Darlington 1883 following the original side’s liquidation in 2012). Ninety years ago though, the Quakers were in the old Second Division and had been in the competition since the first round stage.
It was another hard-fought 2-0 victory - City with two different goal scorers this time – Scottish forward pairing Hughie Ferguson and George McLachlan setting up a Fifth Round tie against Bolton Wanderers on February 19th.
Trotters manager Tom Mather would guide his Bolton side to a fourth place finish First Division finish in the 1926/27 season, though they would fall to the Bluebirds by two goals to nil at Burnden Park. Ferguson and Davies were again on hand to gift City the win and bring the famous side a step closer to lifting the famous ‘English Cup.’
THE LATTER STAGES
Chelsea were the side that stood in City’s way as they hunted a semi-final spot. A 0-0 first leg encounter against David Calderhead’s side on March 5th wouldn’t have been ideal for the 70,000 that paid to watch at Stamford Bridge; however, the return leg at Ninian Park four days later would more than make up for the Bluebirds who had travelled to West London.
Just over 47,000 were present to see Fred Stewart’s troops make the last four on Welsh soil. A completely different encounter to the first leg saw a five-goal thriller, with City taking a two-goal lead through Sam Irving and Davies. The Blues drew level four minutes after half time thanks to Bob Turnbull, but a late Ferguson penalty was enough to see City in the hat.
Reading, who had reached the FA Cup semi-final for the first time in their history, would be the side standing in the Bluebirds’ way of reaching their second Cup Final in three seasons.
The tie was held in front of just under 40,000 at Wolverhampton Wanderers’ Molineux on March 26th, with additional trains added for City fans to make the trip to the Midlands.
The Bluebirds were two goals to the good before half time through the prolific Ferguson and midfielder, Harry Wake. A second from Ferguson would cement Cardiff City’s place in the Final where they would come up against Herbert Chapman’s Arsenal.
Captain Fred Keenor led his team out onto the hallowed Wembley turf on 23rd April, 1927. With over 90,000 fans rammed into the famous North London stadium, Arsenal goalkeeper Dan Lewis made a critical error, which saw him spill Ferguson’s shot into his own net and give the Bluebirds’ the slenderest of advantages with sixteen minutes left to play.
It was a lead they would not surrender.