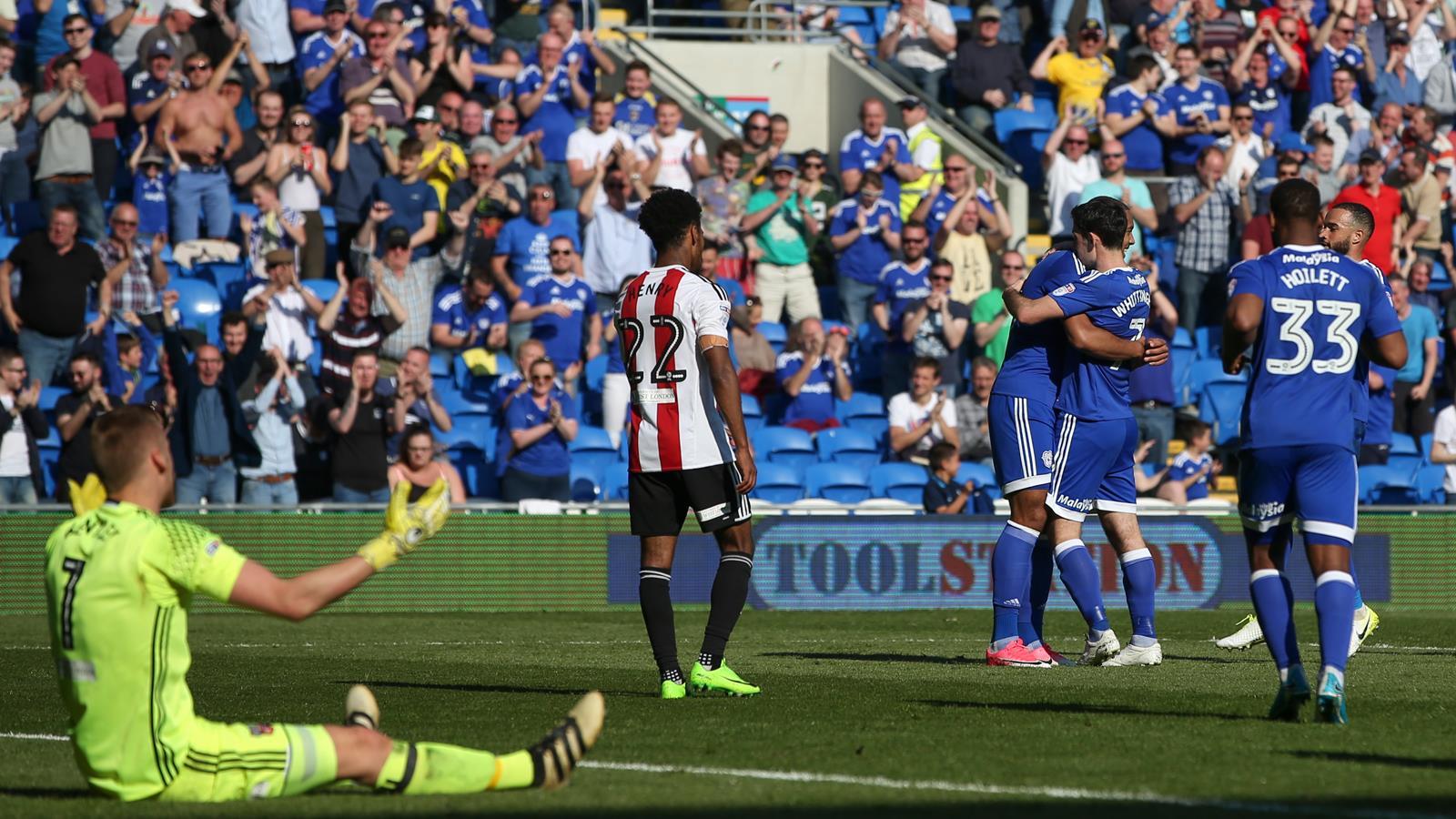 CITY COME FROM BEHIND TO BEAT BRENTFORD AT CCS

After falling behind to Sergi Canos' strike, second-half goals from Sean Morrison and Peter Whittingham saw the Bluebirds beat Brentford on a sunny Foundation Day 2017.

Neil Warnock’s side created the first opportunity of the game in the first minute. Aron Gunnarsson’s long throw found captain Sean Morrison, but his glancing header was straight at Daniel Bentley. Gunnarsson was involved again on the fifteen-minute mark; the Icelandic international’s long range effort stinging the hands of Bentley, with the Brentford stopper alert to Kadeem Harris’ follow-up.

The visitors continued to press, with Sergi Canos firing just wide of Allan McGregor’s right-hand post. Minutes later, the Bluebirds nearly took the lead. Harris played it into the overlapping Joe Bennett, with the left-back delivering an excellent cross to find an unmarked Junior Hoilett, but the winger fired his effort over from twelve yards out.

Brentford continued to threaten on the counter attack. Canos was again involved with his clever back heel finding an unmarked Jota, but his shot was well defended by the Bluebirds’ back line and it deflected wide for a corner.  Moments later, Jota’s free kick found Yoann Barbet unmarked in the Cardiff penalty area, but McGregor was there to produce a superb save from point-blank range.

With the first half drawing to a close, the Bluebirds found themselves behind, following a good move by the visitors. Konstantin Kerschbaumer found Canos with an improvised backheel, and the Spaniard was on hand to tap home to give Brentford the lead with less than five minutes remaining before the interval.

The Bluebirds began the second half excellently though, and grabbed an equaliser just a minute after the restart. Peter Whittingham's superb delivery from the left hand side found Morrison, who headed past Bentley to bring the two sides level. It was the defender’s fourth goal of the season. Minutes later, the Bluebirds were so close to taking the lead their second half display deserved. Jazz Richards did well to find Junior Hoilett, but the Canadian was denied brilliantly by Bentley with a close-range header, while Morrison was also prevented from doubling his tally by the Brentford stopper.

Brentford almost took the lead themselves on the counter. McGregor did well again to deny Canos his second goal of the game. Kerschbaumer then stuck the ball home from the rebound, but to the Bluebird’s relief, the referee was on hand to disallow the goal for handball.

With the clock ticking down, the Bluebirds finally took the lead. Kenneth Zohore did well to knock down his header to Whittingham and the midfielder found space in the Brentford penalty area, hitting a right-footed volley into the bottom corner to complete the comeback.

With their tails up, Cardiff almost made the game safe two minutes later. Whittingham’s low free-kick found Gunnarsson, but his header was straight at Bentley. Hoilett also tried his luck from distance, but Bentley was well behind it.

Richards did brilliantly to deny Alan McCormack with a last-ditch tackle as the Bluebird’s closed in on victory. With two minutes remaining, Lasse Vibe looked to have escaped Bruno Manga in the six-yard box, but the defender did well to stay with his man and deflect the Brentford striker’s effort into the side netting. Thankfully for the Bluebirds, the corner came to nothing and the Bluebirds managed to hang on for a hard-fought three points.