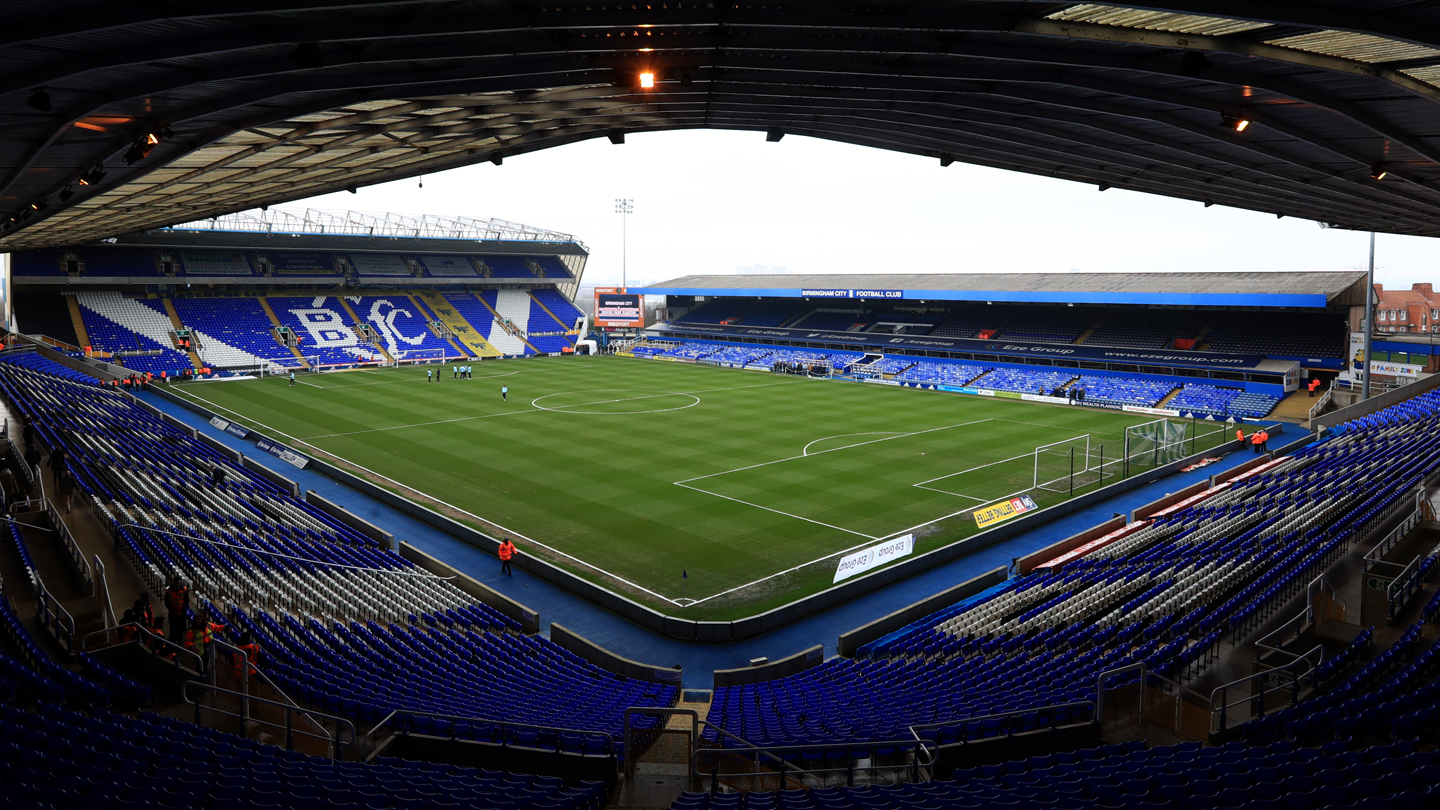 1,000+ Bluebirds will be making the journey to St Andrew's Stadium...

Birmingham is the second largest city in the UK, with just over one million inhabitants. Located in the West Midlands, the city is just over a two-hour drive away from the Welsh capital via the M5 and the A456. Unfortunately for travelling City fans there is no designated away fan car parking, however limited street parking is available in the vicinity of the ground.

The closest train station to the stadium is Bordesley, with a special matchday service operating. The walk from the station to the stadium is approximately ten minutes. Alternatively, supporters travelling by train should head for Birmingham New Street or Moor Street in the City Centre. From there, buses 17, 58, 59 or 60 will take you to the ground, otherwise the walking time is 20 minutes. A taxi from the city centre will cost approximately between £6 and £8.

Purchase your away tickets now!

St Andrew’s has a capacity of 30,015, which makes it the 12th largest in the division – exactly halfway in terms of stadium capacity rankings. The Bluebirds fans will be housed in the Gil Merrick Stand, named after the former Blues goalkeeper and manager. The stand, which is shared with home supporters, has a capacity of around 8,000, and was formerly known as the Railway End.

The away fan entrance into the stadium and coach parking zone can be found on Coventry Road. Please note that there are no cash machines inside the stadium, and visiting fans are advised to bring cash should they wish to purchase refreshments or a matchday programme (which is available for £3) from inside the stadium.

Internal concourses in the away end offer a variety of food options, including pies, burgers and hot dogs. Alcohol is available in the form of Foster’s lager or John Smith’s bitter, priced at £3.50 a pint. Bottles of cider and Smirnoff Ice are also served. Alternatively, there is a McDonald’s fast food restaurant further down Coventry Road, whilst a Morrison’s supermarket can be found in the other direction. This is also the nearest cash machine to the stadium.

There is no official designated away pub for this fixture, with supporters advised to find a location closer to the city centre if possible. Some popular suggestions include the Wellington Pub on Bennett’s Hill, which has a large variety of real ales. The Shakespeare Pub just outside the entrance to New Street Station is another popular location for visiting fans. Slightly closer to the ground, The Cricketers Arms welcomes away fans in small numbers.

Birmingham offers a wide variety of culinary options, with four Michelin starred restaurants but plenty of local ‘pub-grub’ servers. In the City Centre, Adam’s restaurant is the perfect place for some fine Friday night dining.

The Digbeth Dining Club at Spotlight has won various ‘street food’ awards, and is only open on Friday and Saturday evenings. A number of traders set up at the venue, which is in between the stadium and the city centre, serving a wide variety of authentic dishes from around the world.

Purchase your away tickets now!

As our match against the Blues is an evening kick off, supporters have the opportunity to sample Birmingham’s varied nightlife after the game. Enjoy the relaxing canal-side atmosphere at Brindley Place or The Mailbox. Birmingham also has a growing comedy scene, with Jayde Adams preforming at the Glee Club on Friday night, and Jarlath Regan on stage at Jongleurs on Saturday.

There are plenty of other Saturday entertainment options for those travelling fans who are making a weekend of their Birmingham visit. If you have a sweet tooth, check out the Cadbury World museum in Bourneville for an interesting but tasty trip. Anyone with an interest in motorbikes should head for the National Motorbike Museum, though if all else fails enjoy some Saturday shopping at the famous Bullring Shopping Centre.