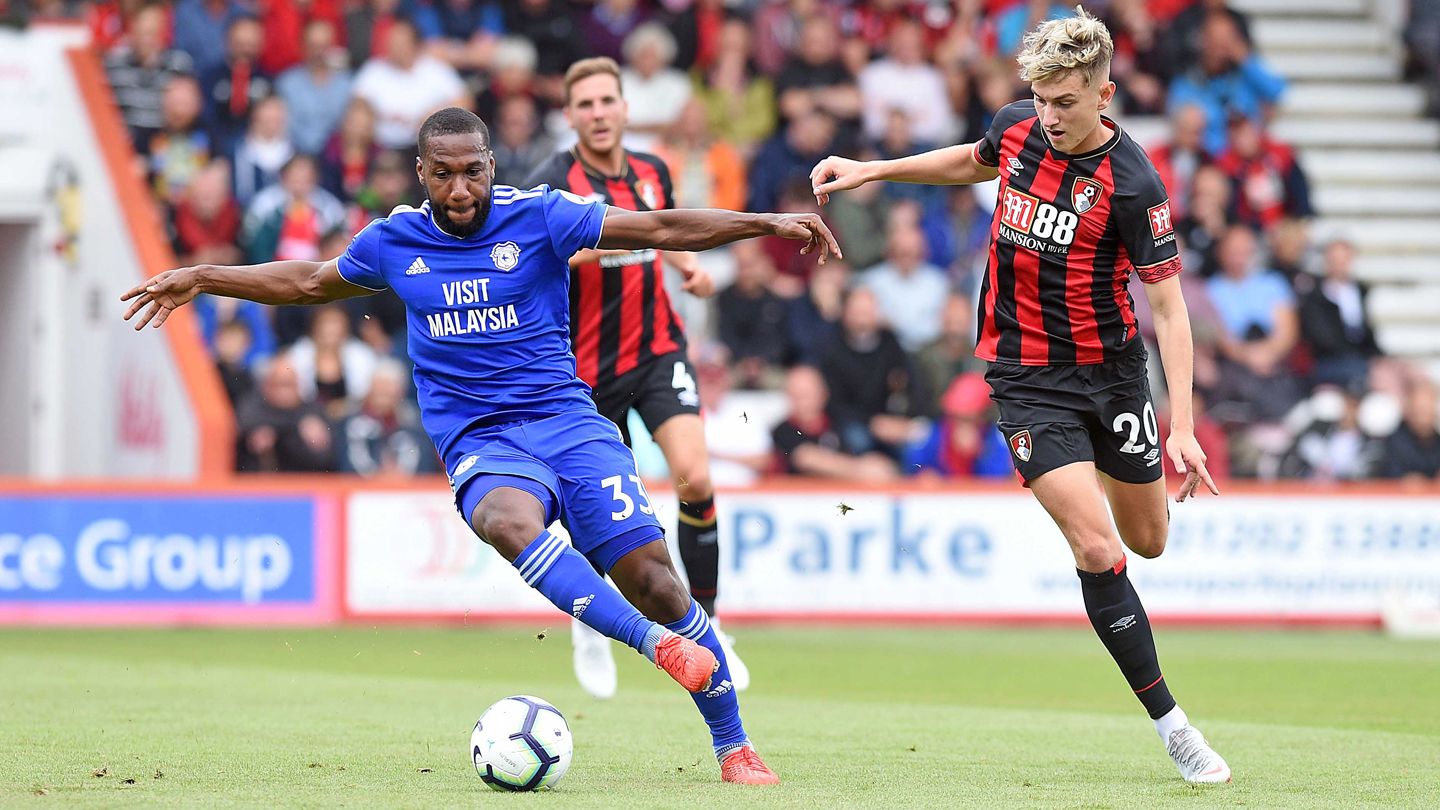 Match report for Bournemouth vs Cardiff City on 11 Aug 18

There would be no fairy-tale return to Premier League football for Cardiff City, but Neil Warnock’s men would leave the Vitality Stadium with their heads held high following a strong showing on opening weekend.

The Bluebirds set up with shape and purpose, coping through the early exchanges with the distinctly higher tempo of Premier League football. Nathaniel Mendez-Laing was getting early joy down the right flank, and his good cross on five minutes found Bobby De Cordova Reid who did well to meet the ball, albeit without the precision to trouble goalkeeper Asmir Begović.

City were moving the ball with confidence, Joe Ralls keeping things ticking in the middle of the park whilst the lively De Cordova Reid stretched the Cherries’ back-line time and again. But a nasty tackle on Ralls by Adam Smith just before the 20-minute mark halted the Bluebirds’ flow a little and, in the 24th minute, Josh King’s smart work in the right-hand channel saw him find Fraser inside the box to slot home the easiest of finishes.

The visitors were a little rattled, and Bournemouth had further chances from open play; though when their best opportunity to get a second came, it would be from the penalty-spot in the 34th minute. Bruno Ecuele Manga was very harshly adjudged to have brought Callum Wilson down inside the area but, perhaps justly, Wilson saw his spot kick marvellously saved by Neil Etheridge.

There was a sense in the away section of the Vitality Stadium that the penalty miss could vitalise the Bluebirds on the field. The impressive Junior Hoilett was causing problems for the hosts on either flank, and after a superb recovery challenge by him in the 40th minute, Ralls put in a delectable left-footed ball that Mendez-Laing almost connected with at the far post. There would be no further clear-cut chances, though, and it stayed 1-0 to Bournemouth going in to the break.

The Cherries started the second half strongly, though City’s defence remained resolute – Ecuele Manga the stand-out defender. But as the hour mark approached, the Bluebirds began to open up more and Callum Paterson’s good movement inside the area almost brought forth a shot that would have had Begović floundering, were it not for a fine late block. It would be the midfielder’s last action of the afternoon though, as he was replaced by Danny Ward and Josh Murphy stepped in for Mendez-Laing.

Despite being behind, City had established control of the contest and their best chance of the afternoon came in the 65th minute. Hoilett’s corner was headed back goalward by Sean Morrison, before Murphy connected with a bicycle kick; Morrison was on the line to turn home, though Begović did just enough to keep the ball out and score at 1-0.

Bournemouth had chances as City looked to hit on the break, but that resolute Bluebirds defence stayed strong and cleared their lines time and again. A nasty head injury to Lewis Cook added five minutes of injury time to the proceedings but, perhaps as significantly, seemed to kill off the visiting threat with the clock hitting 90.

Bournemouth finalised things with a Callum Wilson strike in the 91st minute and, although the home side were perhaps better in certain areas on the afternoon, Neil Warnock’s side were no doubt hard done by not to leave the South Coast with a share of the spoils.